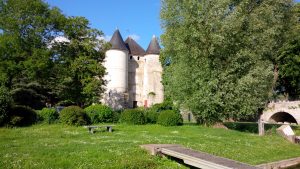 “How pretty can this get, ?” asked Sarah. We were tied up facing a half timbered medieval mill ahead, and to our side a small stone castle with turrets and conical slated roofs in the Normandy style.

Stephane Gibier explained: “today is regatta racing day, I will move the dinghies for you to have a bit more room. I can do that because I am the president of the yacht club of     Vernon !”

He went on to get us access to the clean large shower rooms, fully tiled, being part of the school. “ The mud is building up… we cannot get anyone to dredge it. “  In fact we saw not a single dredger all the way up the Seine.  “ It is not possible to get a permit for doing that,” he explained, “because the mud is so polluted.”

The Seine was the scene of industrial toxic dumping scandals through the past decades. Although the authoritites have clamped down, it still remains heavily polluted, with high levels of toxin-loaded sediment and bacteria, among other contaminants such as sewage and runoff.  And its not just big industry.    A few years ago some angry lorry drivers in a struggling transportation company threatened to pour more than 8,000 litres of toxic fuel additive into Parisian river unless their demands for redundancy pay-offs are met. The outcome was a success for them. The Paris authorities have announced that the Seine might be clean enough for swimming by 2024- that claim being part of their Olympic games bid. Parrot says “that is not achievable because the city cannot curb the excessive use of farm chemicals upstream, which have been partly caused by the Common Agricultural Policy giving French farmers a subsidy to continue their intensive farming, of over 8 billion Euros. ( Er, three times the amount dished out to British farmers ).

After such a helpful welcome, we walked  our folding bikes through a seedy street market where the roads were closed. Then we pedalled about a mile and a half along level concrete paths to Giverny. ( continuous concrete? How expensive ! ) This was the reason we stopped here to see the magical gardens of Monet. The artist lived here from 1883 until his death in 1926. The village contains pretty 19th century rural cottages which nearly all sell art. Monet had done rather well for himself, selling on a 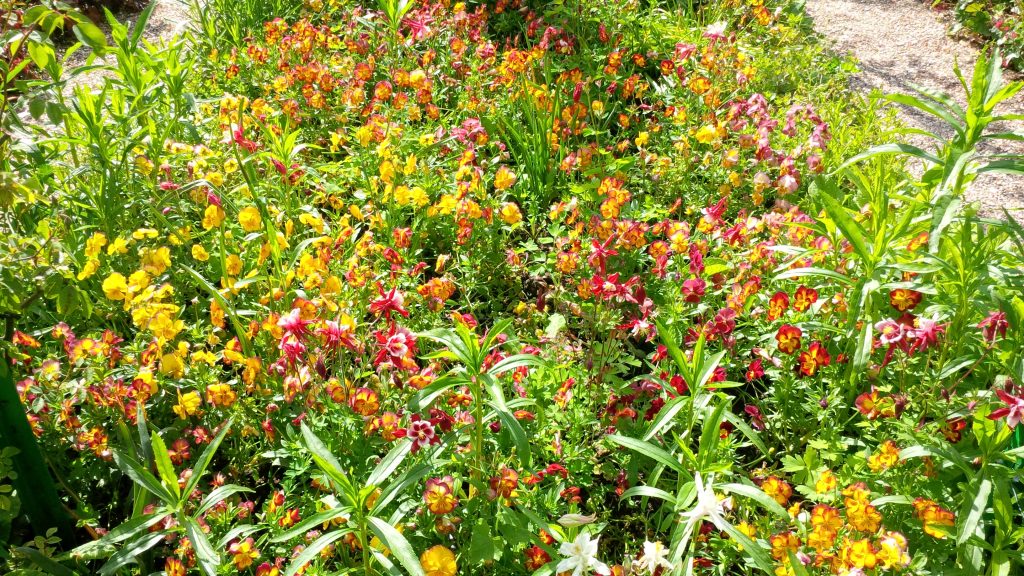 commercial scale later in life, a lot to America. His gardens were a sea of many colours in the herbaceous beds. Although we were warned about the long queues it only took about 20 minutes to get in. During his earlier life he was a horticulturalist, and later he extended his garden into the famous lily ponds. We sat drawing by one of the Japanese style bridges. We sank into the sofas in his huge studio, which was the size of a smal 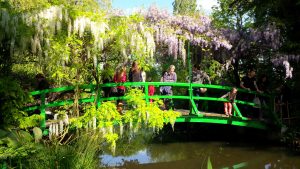 l hangar, and read the books with old photographs of him at work.  On previous visits to Paris we have made the pilgrimage to see the largest set of lily pad paintings in the Musée de l’Orangerie – a huge panorama  on specially curved walling. The herbaceous beds at Giverny were cleverly laid out on a grid with access denied at every other grid, like a tartan. Monet planted Japanese cherries, tulips, irises, oriental poppies, gladioli, phlox, delphiniums, lupins, roses and pelargoniums. Trailing nasturtiums grow across the gravel paths.  This allowed us to see all the colours against a backdrop of greenery with fewer people in the view than there would have been if all the paths were open. The flower bed pixies must be on night shifts here, for there are no weeds, nothing overgrown, all is fresh. The same is true of the rambling house, all each room painted in a fresh colour theme such as the kitchen sparkling in cadmium lemon, bedrooms dreamy in cobalt turquoise.