Using the Fluvier Canal guide nearly got us into trouble again. Having got fuel doctor from the chandler, the glass filter was full of white solids, so it earned its high price. Cleaned up, then  fuelled up we departed from Rouen motoring up the river under the bridge that should not have been there. Then past the fuel quay that was there no more. Thank fully we had waited for the marina pump to be fixed that morning. Then on to Andelys, which was a small marina marked in the book. Sure enough, it is no more. We nudged the mud, ignoring the general sense that it was ferme – but had to exit and motor on.

This made us very worried about where to moor for the night, for still there were no quays nor banks with deep water. Perhaps go through the next lock, or tie up near it? No chance of either as we discovered next day – but luck was with us, for we spotted a friendly English motor cruiser about our length tied to a wooden quay. They offered us the chance to tie up next to them, which meant our keel was in deep enough water. We added lots of fenders because the wash from the ocean going peniche barges was formidable. The Portsmouth owners of this boat, “Chartwell” had downsized their home like us, and returned often over the channel to make this trip. “you will be able to tie up at Vernon,” they said. “If its too shallow go for the steel barge posts….”

We walked in the warm dusk through a very established trailer park with hedges and gardens towards the white castle “Chateau Gaillard”.  Built in 1196 by Richard the Lionheart in phenomenal speed. When it was one year old he celebrated it by recording “how beautiful is my daughter.” On completion only one further year later it had cost more than all the buildings done by him in 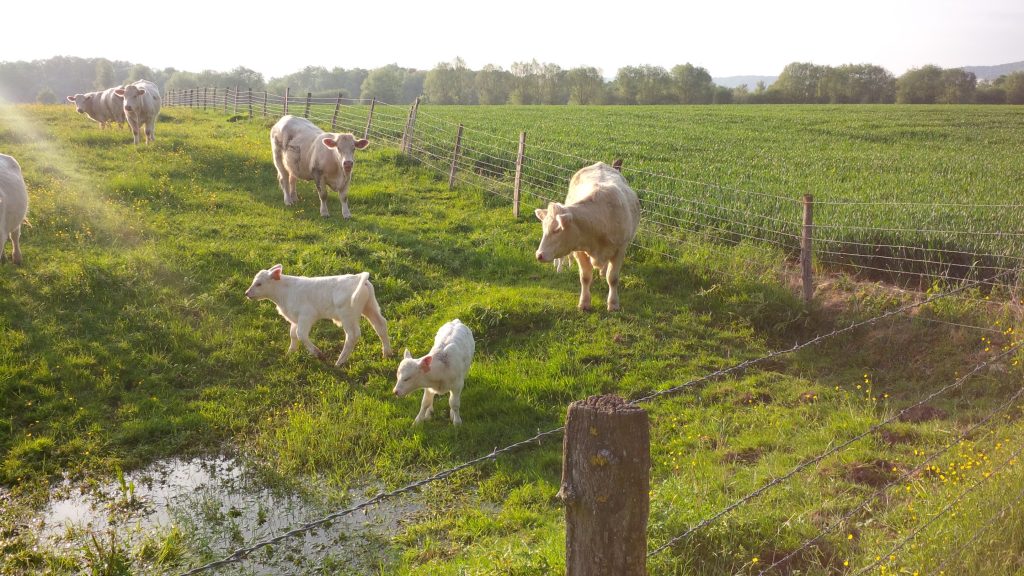 England. By 1203, all of this, for the “Coeur du Lion”, as he was well known in France, was lost, and he died of a poisoned arrow wound in another French battlefield. “ In fact, “ said Parrot, “Richard  is listed among the 10 worst English Kings. He was never at home, always fighting, for example, the crusades. He w
as captured twice and emptied the English coffers with the huge ransomes paid for him. In Hollywood he became known as “last reel Richard”, because he always put in an appearance (fictitious by he way)  to trounce the greedy King John in order to free Robin Hood.”

But for us, the pale stones up the hill felt completely French, not English. Actually the King probably did not even speak English. Later the castle was besieged and when it fell it opened the way for the French conquest of the Seine valley.   We walked along fields towards it, towering in the last sunbeams of evening, on a pinnacle of rock. The only noise was from the shaggy calves , and we counted wild flowers breaking into bloom. The warmth of a sunny day glowed back at us from the fertile land, and we picked Elder blossom to take back to our table. Later, “Chartwell “ told us, “ there is nothing inside the castle. It is made of  re-built exterior walls which simply make a grand silhouette.” So we did not feel bad that we arrived too late to get there.

By 6.30 next morning we were on our way through the next lock to aim for Vernon. Not being very confident yet, we were a bit un-nerved when the large barge drifted back towards us, not bothering to tie up. Memo from Parrot: “ keep a fog hooter handy to give them a blast next time. “  Here we waited one hour, and there was not anywhere to tie up after all, so the previous evening of good fortune had saved us from a big problem. Once again, lost in translation, our Fluviale guide led us astray about tying up at Vernon, where we arrived at midday. Soft mud to port stopped us getting near to a wooden quayside. We crossed the river and began the tricky manoeuvre of tying the bows to a large steel post, which had a ladder onto the shore.  “oi “ came a shout, and there was not much doubt that the man in his olive windcheater was going to give us a lecture about it being prohibited. But all was not lost. He pointed back to the wooden quay and by arm waving and by virtue of Sarah’s good French he persuaded us to go harder at the mud. He was right, the 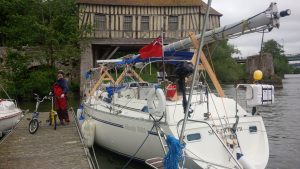 water was just deep enough nearer the shore, and he shot over the bridge on his three wheeler scooter to move some large dinghy sailing day boats. I suppose if he had been wrong, we would have needed to be towed off.

“Are you the capitaine of the harbour,” I asked.