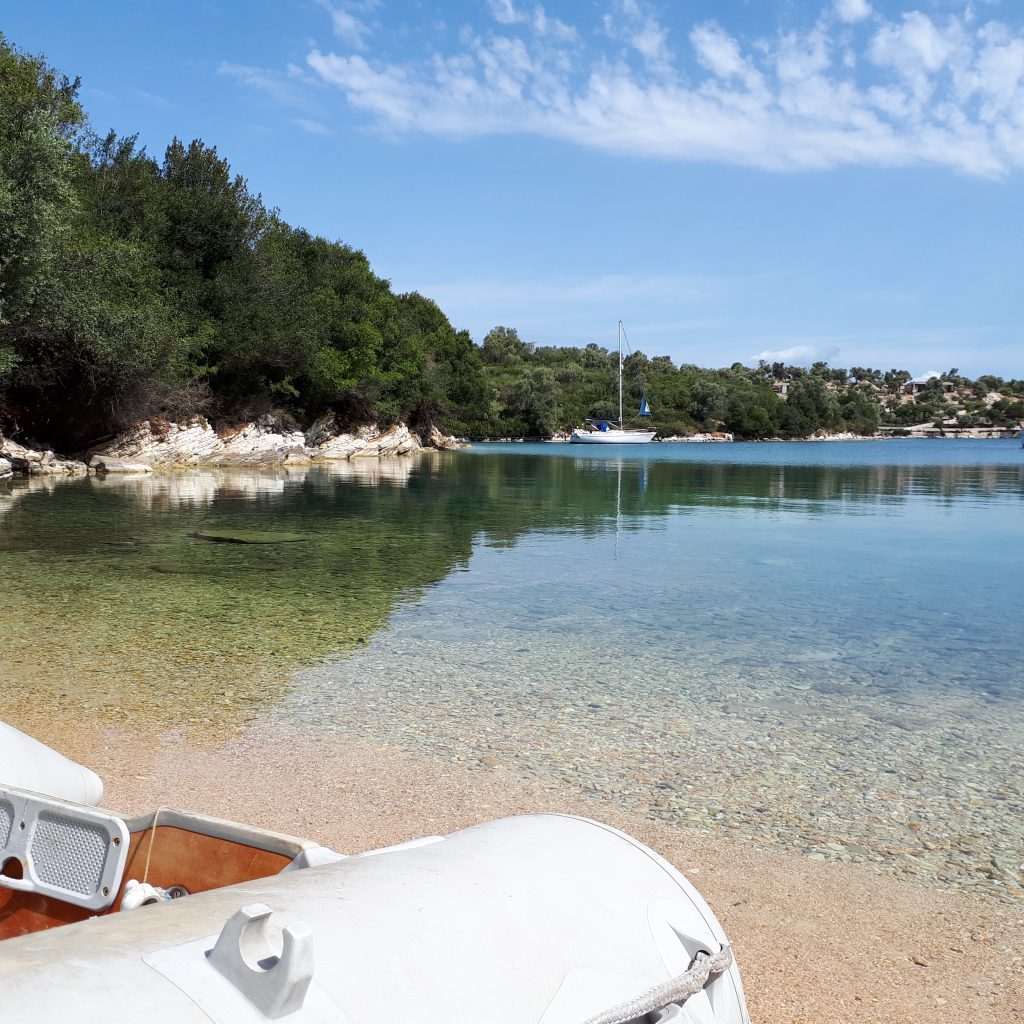 We named these bays to remember why we went there. The finger bay of North Meganisi    ( Ormos Kapali) ,we call kingfisher bay, after seeing them there last August. The bay with a quay and beach for a few yachts we call rose` bay, because the beach bar sells its own brand. ( Kastos). Vulture island is our name for Nisi Petalas .

Leaving Preveza we used for the start of our first trip the new crossed anchor horseshoe- for someone had laid their chain over ours. It worked for its first outing, but I got a burned hand from not realising we needed a longer rope on it. With lively following wind and sea we shot over the bay, waited only ten minutes at the Levcas bridge, and down the  canal past the big marinas and the biggest rubbish landfill dump we have seen.  ( but not so smelly in August last year ).

Anchored that evening at Ormos Kapali in the calm shelter we felt peaceful. Not spotting any kingfishers this time we watched fish in the clear sea, about 4m deep. Cobalt and Cerulean blue glittered below us as some baby shark like predators circled around. Only about a couple of feet long, think and black stealth anthracite in colour – they chased all the other visitors away. Normality returned when we could s ee the small black fish near the surface and abundant shoals of pewter and charcoal striped ones lower down.

Rainstorms and squalls were brief, and our anchor held well  enough with one long rope to the trees behind us. ( 50m, 150ft).

This month the colours of the landscape is more varied than in August. The holly, pine, olives and spiny maquis undergrowth were full of the fresh new greens, sap green, emerald and splashes of chrome yellow hues. Walking over the hill for coffee in Vathi Port we were disturbing large butterflies every few steps. The large yellows with splashes of orange turned out to be called Cleopatras.

Vathi is both a ferry point for this island and a base for some flotilla yachts. The quay was almost empty though the cafes had sumptuous rows of roses in containers round them, many with fragrance if you stood nearby. Rich velvet carmine- purple blooms cascaded around the quayside. Better than the smell of diesel near the fishing boats.

We spent more time at this bay than any other, listening to goats bells and feeling very self sufficient. Not starting the engine for days was a treat, the solar panels fed the fridge in the day.

Kastos harbour was reached via Mitika Port at a lunch time stop for food supplies on the mainland. Three 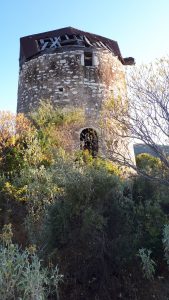 yachts were tied up stern to the quay . it is very shallow, like Kastos. At sunset we   tied our stern onto the harbour beach.  Just .3m (a foot) under the keel. There is just over a foot of tide and we arrived at low water springs. (We had been watching the big moon.)  The larger yacht which copied us got stuck on the sand, but wiggled off.

At the Traverso beach bar Sarah had her long promised Rose`. “to be honest we don’t make it here. It is our label from the Peloponnese. “  said Spiro. “I was in property development with my brother on the mainland until the crash. I qualified in architecture and conservation, and we restored this two storey building with the ring beams. “

We climbed the hill to see the sunset behind the village by a derelict mill. A lone Airstream caravan nestled below it in a gulley. ( to let ). Around it we picked strong scented sage which we cooked with garlic and pasta. 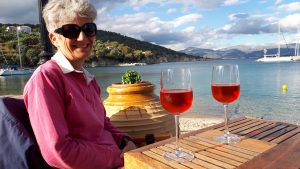 ed us leaving Kastos but we were happy to spend more time at another windmill, now a café, on the seaward promontory. The path was necklaced in painted blue pebbles, and the matching chairs where we had long morning coffees had fine views across the straits.

After some motoring into the wind, and turning back to try again, we motored in light headwinds past the fish farms to  enter Nisi Petalas. Our keel was about 20cm ( 8 inches) above the soft silt of this enclosed sea, some miles across.  In calm mirror like water our anchor dropped   at a  large cave high up in the cliffs. “a vulture has been reported with a probable wingspan of 2.4m ( 8feet),” said the pilot book by Rod Heikell.  Instead of the vulture we watched a flock of lesser kestrels circling around their roost – plump and brownish. The landscape was almost bare with few wild olives and hollies. Not much cover for mice or supper for them.

Then ripple by ripple the fish began to make their evening circuits, tiny disturbances showing in the sea. A display followed of fish  jumping several times their length, with a splash following their furious wiggles. Some predator perhaps, chasing them for supper?

Fishing with bread, then cheese, and then feathers got me no success. The fish were plate size, but not tempted by my efforts. “ You need live shrimps for baits, “ said the fish restaurant waiter, Costa, who smiled as he explained in Messalonghi later. Actually I do have a little shrimp net, so must try harder…..