We kept to the west side of the straits, out of the   shipping lanes. They are controlled by radio as if they were a harbour. We had read about some yachts being harassed for papers, and yet for European registered boats there was no need for paperwork. Yachts are required to make a   radio call. This resulted in a cheerful answer in English asking us to keep out of the middle.

Anxiety about fuel made us stay even closer to the west side in search of a quay where we tied after waiting over half an hour.  The yacht which was there slowly was filled with hundreds of litres. The fuel was wheeled down the quay in a plastic barrel from the roadside pumps, and fed down slowly by gravity. The swell built up and we bounced a lot on the big fenders which like all fuel quays, left black marks.  Unknown to us we could  have got fuel later at the next port, but after so many examples of fuel not being where it is supposed to be , we continued with more confidence at 6knots on the last of the tide. As evening fell we began to have a knot or two against us.

The pretty bay at Taormina has a good name for being a place to anchor. But for us the swell was too much from the side, coming in from the East. After havin 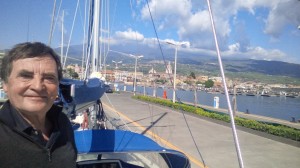 g a look, we continued south, motor sailing until the wind died at dusk. A pod of dolphins played for a while jumping flamboyantly  ahead of our bows. Just as darkness fell, we entered the port of Riposto. By this time the swell was sweeping towards the shore in lines of high white surf. This was large enough to be alarming when imagining engine failure or a rope round the prop in no wind. We kept out to sea.

We arrived in Riposto at dusk. From the harbour office a man appeared out of the darkness who beckoned us to tie alongside. He offered power and water, and then returned to his meal of tomato salads.  Riposto was a town of contrasting wealth.  Hundreds of leisure sailing yachts and motor cruisers were packed into the half of it that were being used. Expensive Audis and Alfas purred along the quay to unload for the weekend. Two large superyachts arrived next to us from Malta, picking up guests. Yet when Sarah returned from her  dawn run round the small town she said “ this is a one horse town”.  As we went to the railway station the grey dusty tw 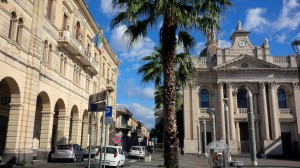 o storey rows of partly empty streets could be seen as little more than a crossroads. What is a one horse town, asked Parrot. I remember how that is what they called the port of Lowestoft where I went to school. A town with high unemployment and a place to get out of.  Riposto did have a friendly lively fish market, and I bought swordfish, “ pesce spada” for our evening meal. The only cars moving that evening seemed to have driven in to queue outside the takeaway pizza shop.  A large bicycle rally livened up the quay as they got ready. 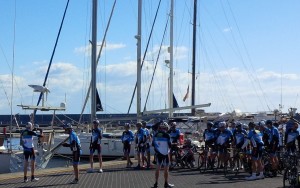