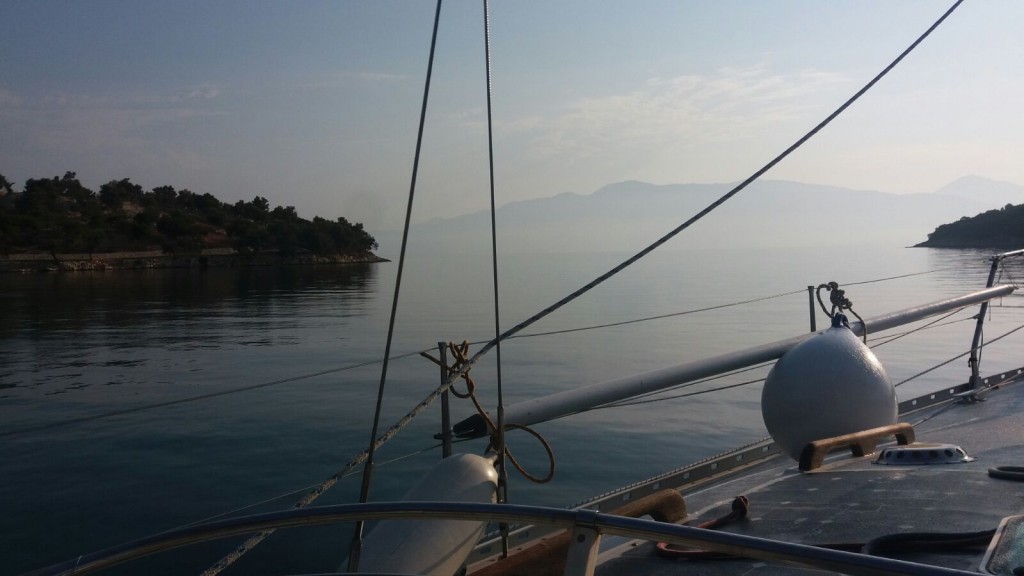 After a month in the Greek Ionian islands it did seem as if the “Zorba dancing” was pretty much the high point of Modern Greek village culture. “Then again,” said Parrot, “Would you expect to see a cross section of modern culture in English rural villages? Morris Dancing? Welsh Spinning Wheels? “The film Zorba the Greek starred Anthony Quinn, who enacted the life of a real character who lived in Crete.  When he came to do the Zorba dancing, Quinn had sprained his ankle. He only agreed to do the scene if it could be played at half speed. On a previous holiday before sailing times in western Crete we had a Greek dancing lesson, and saw Greek men doing it at parties. Basically it looked the same to me. In order to get in the mood, the locals would drink a lot of Ouzo and listen to the soporific Bouzouki music. It is played on large mandolin shaped stringed instruments, and has a slow repetitive rhythm. This originated in the opium dens of the harbour of Pireaus near Athens. If you shut your eyes you might nod off, till the locals start firing guns into the trees. I thought they were shooting squirrels, as leaves cascaded down, but they were just Bouzouki happy.

A cultural comment was made by a Scottish mariner in the 18th century called “Cut Lugs”. I read about him in the Heikell sailing pilot. (His nickname came from the punishment meted out to him at home when he spoiled a local girl’s honour.) He escaped after being chased by a Saracen pirate ship which had been hiding in these finger bays. “Then again, “said Parrot, (again), “there is a lot more about his opinions on the internet. He asks his readers how can the Greek culture, which reached such a high point in classical times, have disappeared. Travelling in Greece in the 18th century, he wrote, that you would never guess that it was the same inhabitants if you looked for examples of their art or literature. “

The answer might lie in the numbers of invaders who have occupied Greece since Roman times. Venetians, Genoese, Saracens, and for a long time the French. “Yes, and I will tell you another one of the long lasting effects of those invasions,” interrupts Parrot. “It became a symbol of resistance not to pay taxes. It was admired as a crafty way of getting one up on the collectors of tributes. And from those days onwards the Greek tax 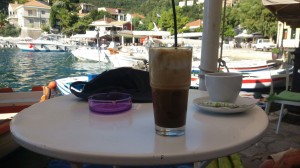 system has never worked. It’s not just poor island people, it’s also those professionals with their swimming pools around Athens too. The BBC flew a drone over the city to demonstrate how many were not declared. So it’s not surprising that Greece is bankrupt and keeps getting bailed out with 40 year loans from the European Central Bank. “

We did not find any modern Greeks who could chat about this. Anyway, we were there for the beauty of clear bays, peace and swimming.

Next, a short sail eastwards, we anchored in a quiet finger bay with two other yachts, in very deep water, with stern lines tied onto some rocks. We called it “Kingfisher “bay, for we watched several of them streaking along the pinewood and maquis shore near us. We swam, watched shoals of small black fish, and walked the fragrant road to the port of Vathi. The port is a village wrapped round quaysides and pontoons for about a hundred y 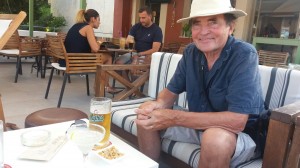 achts. Of course in a bay like this the water is not very clean for swimming. Drinking morning coffee in the “Heavy Metal Rock” bar we saw lots of charter yachts being moved around. Behind the main front lots of the houses had courgettes, peppers and orange trees growing in the back yards. The only employment there is connected with the yachts.

Back in the peace of our bay, where we stayed a few nights, it was very quiet and we were surrounded by a natural landscape. Not for long it would appear, for round the corners were several very large building sites with modern apartments, swimming pools and terraces going up. We did notice that they don’t take out the olive trees, everything is planned around keeping them.