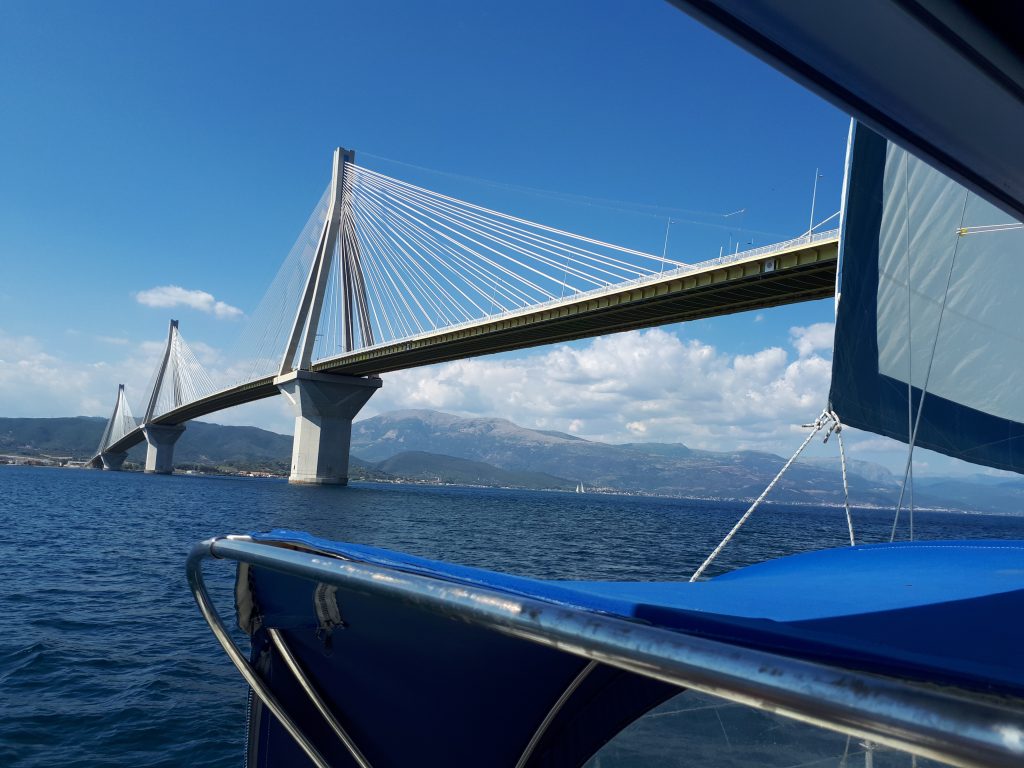 With a light following wind we motor sailed using the genoa in calm sea under this huge suspension structure. Its five-span four-pylon cable-stayed portion of length 2,252 m (7,388 ft) is the world’s second longest cable-stayed deck. Shipping traffic is controlled for smaller boats, so that they  use the side spans. During our approach the radio controller kept asking “ is that yacht with you, the one going through the wrong span”. As only one was in sight we supposed they weren’t in danger. On the other hand, maybe it’s a bit reckless not to put the vhs radio on?

The wind increased as we rounded the corner of Trizonia island to anchor in 3m depth to one side of a  bay facing east. On the way we had seen kite surfers. The  large black anvil shaped clouds loomed behind, but never quite caught us up until sunset approached. The mainland mountains of Parnassus framed our views on this passage, being 2,500m high, and they are matched by similar peaks on the Peloponnese . Parnassus was the home of Pegasus, the winged horse of Bellerophon. 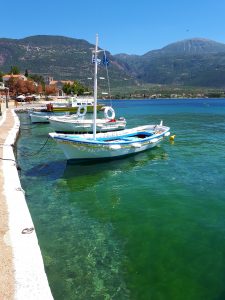 Alongside this bay was an unfinished harbour with concrete walls, and shared hosepipes. The signs of free berthing were confirmed because there were a couple of dozen “livaboards” on their yachts which seemed not to be going anywhere. Just over the low crest at the old fishing quay we were about the only customers to have coffee. Yet when we counted the 70 seats in the taverna, being one of seven, we worked out that this neat restored group of fishermans cottages could take 500 visitors. A fast small ferry to the mainland appeared to be the secret of their success, for there were not even 500 beds in the island.

The wind increased from the east and in our bay the shelter of the olive clad small hills had the opposite effect. Gusts were magnified with  katabatic force, and  turned the water dark around us, so strong that it was almost impossible to row ashore. The next day we sailed eastwards with the genoa up in medium wind, for the 20 mile passage to Galaxhidi. The crew, Paula and Terri, were not alarmed when we put lifejackets on – but the sea increased in height as bigger rollers followed us from half way towards the southern cape where we could turn north. The gulf of Corinth funnels these winds and white tops began to leave the crest of the waves. Anxiety builds at these speeds, not just because there is no turning back, but concerns build about what to do if something breaks. The yacht rode down the seas as the forestay bent in the strain, and Sarah helmed us at the fastest we have been on shearwater… ten knots ! 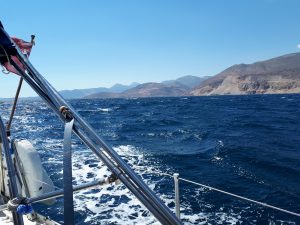 I expected that the inlets of Galaxhidi would shelter us, but the wind followed us round the corner. We anchored for the night in a bay next to the harbour in 3m with a lot of chain out. The wind gusted at over 30 knots. ( a “near gale” on the Beaufort Scale).  On waking, we found that the wavelets were side on to us, with less wind, rolling us in a bad way, so we moved to the harbour.

About 10 yachts tie up here in a narrow harbour that had been full the previous evening. Perhaps it was for the best, as being side on to the wind was a challenge to set the anchor well enough not to drag. About 10.30 am the bus for Athens arrived only half an hour late, to start the crew on their journey home. We were all set to catch the next bus to Delphi but the wind increased to drag us sideways. That night a Belgian yacht that had barged in next to us began to bounce on us, because they had fixed their stern off centre…. Sarah was up at midnight in our dinghy fixing our very long stern lines to move us upwind off them.

The town is a big tourist attraction because it has winding narrow streets and convenience shops as well as cafes all along the quay.

We ate in Bebelis Ostria, up one of the lanes. The family restaurant is in several guides, being praised for its interesting menu and for being friendly. Only two other tables were occupied but it is very large. “here are pictures on my tablet of a snowstorm last winter, and of the snowman,  “ said Nikos. “Up the mountain there are several ski runs. We become so busy that the queue is out of the door.” Now we could see why his interior decoration is in the style of an alpine ski lodge. Timber panels and a gallery upstairs. The meal started with two small carafes of wine, being a red and a white, “to see which you prefer….” He gave us a cd of him making his secret sauces. They were very rich . Our mushrooms with red wine and pine nuts was followed by pork with cream sauce and grated carrots with stuffed onion 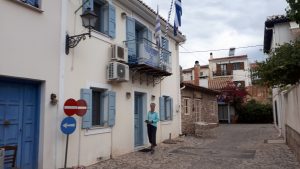 s. On the house we then had crème caramel on nutty honey.

At this port we were asked by the coastguard to go to their office with the flags outside. All the paperwork we had accumulated was requested. Three staff checked things, and they did not seem to have much to do all day in their stiff new uniforms. Job creation perhaps?