Our reason for staying here was to catch the train to Taormina. From a bit of a dump we were transported to a station so spick and span that it could have been a 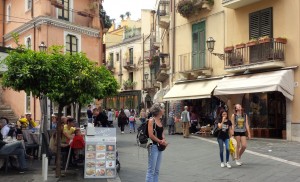 hotel.  Pastel decorations were painted over the ceilings. Polished hardwood doors and travertine floors set the scene for what came next: the town that could not believe its luck: Taormina.

Getting up the hill on a crowded bus we entered the   creamy stones of the Corso Umberto – one of the most popular destinations for Italians in Sicily. Parrot said, this is because they like shopping for clothes…. it’s an airport mall housed in an 18th century main street.  They love to cut Una Bella Figura.  Nowhere in Sicily had this been more strongly visible, with us being somewhat under-dressed in our boat shorts and crumpled shirts and old deck shoes.   Sharp footwear was the norm here, leather of multi 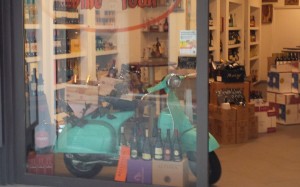 colours, high heels and women sporting legs up to their armpits as they swing their fashion bags with the top Italian names such as Brioni, Daniele Allesandrini or for land based yachties: Paul and Shark. Brioni suits were used in the James Bond films. They were selling their limited edition Casino Royale tuxedo for £3,000 after the film came out. They are one of the few menswear houses that truly do a bespoke (a term deriv ed from English tailoring, where a length of fabric was kept aside as spoken for by the customer), a garment totally customized not only to an individual’s bodily proportions and taste, but even to their professions, and discreet, often unspoken needs.   So what, said the Parrot, are the unspoken needs of customers that they list such as Donald Trump and of Vladimir Putin…?

We had a look in only one s hop and declined the chance to buy a white shirt for £150. Their window display was low key and understated class – all the blues and whites. Further down we saw jewellery shops with locked doors and gun carrying guards 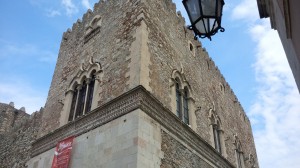 outside. We did buy ice cream and coffee, the most expensive in Sicily. But sitting in the view of the Venetian gothic palaces on the main street was worth it. We also did some drawing of the trefoil windows. Down the side street ristorante tables cascade across most of the steps. We ate at a trattoria, Il Baccanale, in the canopy being half outside. Inside as the name suggests, were paintings and ceramics of Baccanalian party flavour. I had the waiter’s recommendation, swordfish,  spada, and shrimps, Sarah had the shellfish, fungole. With half a litre of house wine the bill was 40 euros.

At the Duomo a wedding party came out from the freshly painted interior, quite a mature crowd ,  some tottering on expensive shoes. As they chatted the flower van was being loaded to empty the church – which seemed a bit quick. Everyone sat around on the warm stones of the square, like us, chatting until they tottered along the Corso Umberto. 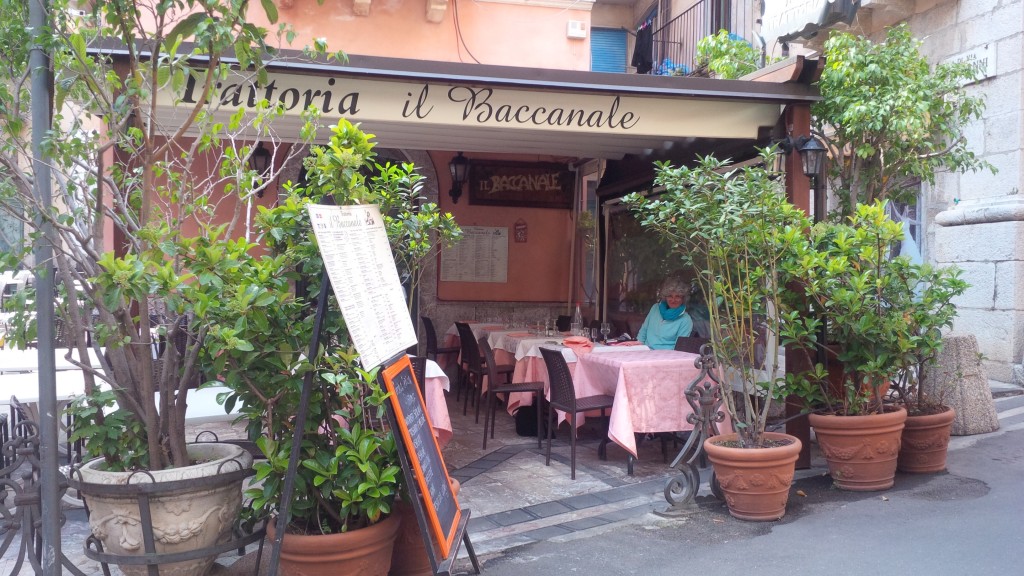