Dimitrios fixed our starter motor, and although it took some days to get one, we liked being in Orei port, getting to know the place better. We evacuated the boat all day while a big freighter unloaded lime right next to us. With no engine we could not move.  Everything became dusted with white limestone powder. On our way to the supermarket we passed the white marble bull dating from 250 bc, perhaps from a funeral pile. He weighs over 6 tons, life size, and was found in the harbour . I stared at the clean ferocious cuts, for he has the  head down and is charging. Such a strong thing to show us strength. What kind of person wanted him on their memorial? If you chose something what would it be?  A falcon? A lion? Or my chatty Parrot…. So there was time to draw him, which is better than the photographs because he is in a glass bus shelter type of enclosure. Parrot asked why his pagan backside is two meters from the christian church compound. I think we should be told. 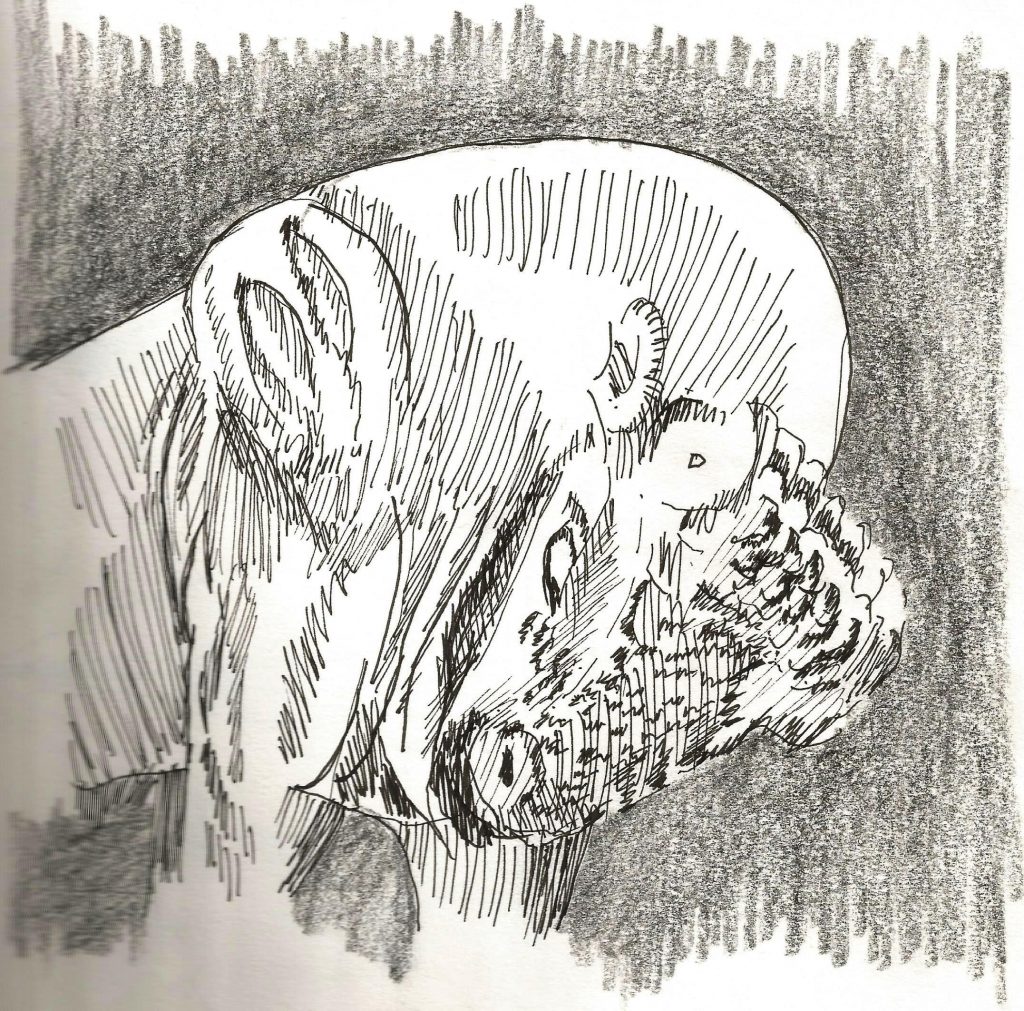 In the  mornings we swam off he clear beach, now full of umbrellas and Greeks on holiday. Then coffee at the Chocolat café,  one of many lining the quay. This one however, brought tap water in a glass bottle that they have kept in the fridge. At last, no single use plastic bottles…. Get with it Italy, you need to learn from a humble small Greek cafe. One morning a woman, who had come all the way from Crete for her mother’s funeral, included us in the round of brandies . “ From my Mother, “ she said. The sun was not above the yard arm, so I drunk Sarah’s for her.

At evening meals, rather than eat lime powder, we  treated ourselves to a small family tavern on the front where we faced the sunset views. They did their lamb slow on a spit wrapped in paper.  It was very tender and juicy. Not speaking English with the owners,  the translation was done for us by a nephew on leave to visit his relatives, who was a seaman from Montreal. Yes Montreal. 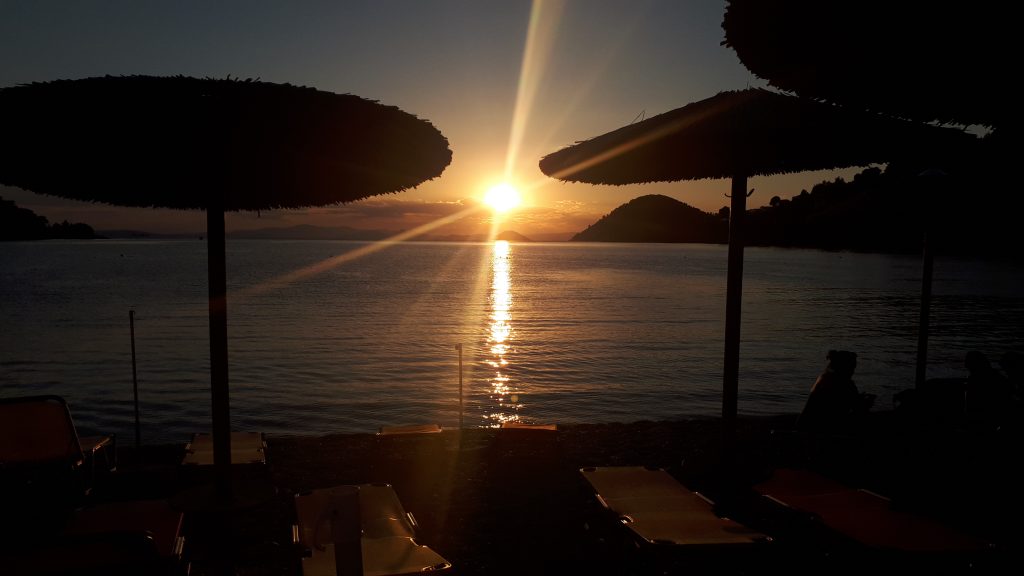 The Sporades cruise that we now were able to enjoy was trouble free.  Days of fine winds  mainly from the north, gave us some really good sailing. Long afternoons on one tack.  Later it was downwind with the cruising chute up. The same bays, we revisited with time to linger for more nights – and sometimes taking the bimini down in order to be under the stars with no lights.  Vega  was overhead. Low down was Cygnus in which lies the giant star Deneb. Nearby is a star I had re-named forever in the registry of star numbers: “Starship Sarah”. It was better than a valentine’s card that year.

The difference between having Guests and Crew became more marked this month. “Guests” need the attention that one would give a 12 year old – safety first and all that. Whereas a “Crew” knows how to work the boat, winching and stowing, bringing her into harbour with a fender at the ready for dunking  between us and the next boat….not waiting to be told to do so.

And so on this trip we liked having Mary and John because they are are an experienced racing crew having been with us for many years on yachts. I used to skipper a larger and somewhat sportier boat than Shearwater,  racing at Cowes, on which I got a dozen friends. Coming into harbour with Shearwater needed no talking to say who does what.  Our sailing became tuned to the sparkling sea, always ending  with arrivals in clear bays. Swimming and cooking would follow, as those stars crept  across the sky.

We re-visited our favourite places. To us it is never boring because anchoring for longer brought home more special things about being in these bays. We have become sailors who like knowing better certain places, not travelling all the time.

Andreamos Bay, by a quarry on the mainland, was sheltered from waves, and clad in very old gnarled, twisted olive groves which we explored .  Craggy red cliffs dominate the shore close by in colours that flowed from ochre to cream. Huge boulders had fallen onto the white beach of small round pebbles. For the weekend the Greeks sat outide  a few self build ramshackle holiday homes built at the bottom.  Some times they were singing, and not knowing a word I recognised the intonation of a  bawdy tone, with drunken laughter. Power lines were draped along the narrow beach, and  laid by the tracks leading up through the groves.  Parrot remarked that they don’t go in for much Elf and Safety here. As for us, we had to watch out for  the katabatic wind and occasional rainstorms, so ferocious one night that we dragged and were saved by our engine. We took two hour shifts in full oilskins in the teeth of the storm.

Panormous Bay on Skopelos was one of  our favourites –We stayed some more days. It is narrow and completely clad in forests of evergreen trees. As predicted, yet again, a very strong wind gusted in from the west at about 25 knots– and we were the only boat not to drag. Yet most of the time the sea was as clear as glass. Going ashore there, through the dusty track under a tunnel of pines we would walk to the beach cafes round the corner. Along the way we counted different kinds of pine, for they crowd in on the slopes all the way to the water’s edge. The young ones had sensuous long green leaves. The colours ranged from pale to dark, emerald through olives to shady chrome and viridian greens – all the greens in the paintbox.  The scent and heat envelops the walker with a most sensuous spa blanket. To round off the peace at the end of the day l the goat bells sounded over the water. One evening two Austrians saluted the sunset by playing a trumpet voluntary from their yacht.

Back to a community to get food and water….We got the knack of where to anchor stern – to in Skopelos harbour. Searching as we followed up the tightly crammed alleys hemmed in with  houses we tried to count the churches, but got nowhere near the 200 total. Round each corner as we climbed we came to face either bougainvillea or scented jasmine. At Nina’s in her open garden again, we liked her spicy chicken, this time served by her daughter, again in designer dress. “ Made by Nina, my mother. “

Still sailing east, we tacked round the bottom of Alonissos  in northwesterly breezes, and chose as was named in the pilot “white cliff” bay. Only it’s not white, its cream, red and Raw Sienna. High  rocks and dark indigo pinewoods surrounded us in a v 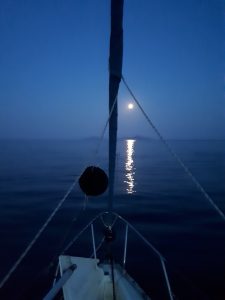 ery open curve. We remembered to lay a stern kedge anchor so that the night breeze did not turn the boat side on to the wavelets coming in from the open sea. Gentle but annoying if they rock you from side to side, the boat seems to accelerate like a pendulum if the bows turn away not straight into them .

There were only two boats  in that bay, and no shore lights, so this allowed us to star gaze again. A large silver moon dominated the open sea to our south.

Sailing up to the tiny inlet of Stenni Valla we thought it must be safe but had an unpleasant interruption to our coffee on the quay. Our stern was banged onto the key so hard that the fender burst and we have lost some gel coat. The wash from a passing large boat had swept into the inlet. Sarah ran to stop it, but you cannot stop over 5 tons of accelerating boat. So from now on we will maximise our distance out from stone quays, using the whole length of my home made ladder passerelle. Again, we liked the intimacy of the tiny harbour which is  for less than 20 boats. The owners of Icarus have been there three generations, and we have seen their buildings increase to include a supermarket in the 30 years that we have been tying up there. If you are using Greek letters it is Ikaros.

With such good winds cutting down onto us from the ridges of Alonisos we tacked up the straits to our favourite of all bays the deserted island of Kira Panaya. Stars and fish among the Byzantine shards and ….maybe kestrels awaited us.