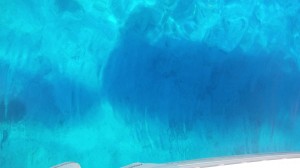 all the shimmering blues, our shadow on the bottom

We sailed for half a day in light SE wind on the beam with the genoa up, cruising along in holiday mode at 3.5 knots. The uninhabited island has a house on the bay – perhaps for fishing – with nobody there, but we could see the top as we anchored for the night in clear water facing east out of the normal wind. Our time there varied from being all alone, to being surrounded by a dozen sailing yachts and a large super sized motor yacht. A bit crowded but somehow nobody touched.

The low cliff of folded creamy linen coloured rocks could have been  folded sheets of bedding. Next to the locked up house was an open chapel,which was cleaned and with a dozen chairs. ( a dozen?- who for?). the bell rope was mysteriously pulled on Saturday evening for some time. The maquis above it was impenetrable, for this is an uninhabited island. While the bell was ringing the low sun made diamonds appear in the water. Psychedelic, if you stared at them, while the reflected light wove whirls of moving spirals on the boat hulls. Perhaps the indolence of such a  bay can weave patterns of remembrance or of strange futures?

As a young teenager I used to stare at the sparkling diamonds as the yacht on which I crewed would slowly sail in calm waters back into Lowestoft. Making the entrance to the pier there a boat needs some speed because of the cross tide, so it would be time for the engine. When he was my age my father used to wait on the same pierhead waiting for a fishing smack to sail in, which they had to do at some speed to overcome the current. Sprinting for the bridgemaster to warn him to open it, father could earn a penny from the skipper. The smacks had to come in so fast that they could not turn round.

Later, the Beatles included the words “Lucy in the sky with diamonds.” We all knew they had not been sailing, but were writing about taking funny substances (LSD). In his book “The Magus”, John Fowles wrote about the effect that just gazing at the sea on a Greek island could have….it  is a postmodern web of ideas that are mixed up with psychological illusions which become increasingly dark and serious. His theme was to explore the future if some strange person became interested in you, for no explained reason, and changed how you thought about yourself.

As a youngster I used to stand on the huge empty Lowestoft north beach wondering about the future. My father and I used to go that way before school if the early sun was making sheets of silver over the water – for Lowestoft is the most easterly point of Britain. In my practice I once finished the design for  a night club in the midlands for 2000 people,working with the hon Richard Lyttleton who took things beyond the flashing disco effects. We did a circle of focused strobe lights – something for the lsd crowd to experience without taking anything…. These of course were banned soon afterwards due to the effects on epileptic people. 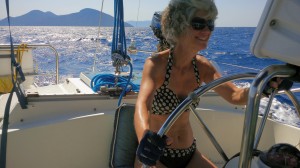 In one house bay sea state became a bit rolling , so we sailed the next day in a moderate nw wind to Kastos. One sail up, and we did six knots.  “Welcome to Paradise “ said the German next to us as we anchored stern to the shallow beach. About a dozen yachts were along there with us, and another dozen on the stone quay. It is a small clean harbour with less than 200 people, a few summer bars and tavernas. We stayed two nights and picked a lot of wild sage up the hill, which lasted several meals.( sage, garlic and pasta).

The harbour is so small that boats tended to cross anchors not just with their neighbours, but also with  those boats opposite. A Belgian crew next to us found that   two latecomers had laid over them the next morning. Everybody helped and all the gadgets came out. When a British captain cala 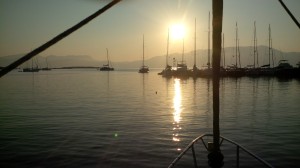 mity came in  we all watched him cause an hour of mayhem. He was too far in, then too far out, then his anchor came up,then he banged into the next yacht of friendly Dutch boys who had to leave and re-anchor, and had to do him as well.  The parrot said please put the cover on my cage I can’t stand the stress of it…… Why did he not just ask nicely to tie up next to the downwind yacht and sort it all out?

“The European Union paid for all this road, quay, lights and piped services underwater from the mainland “ said the small shop keeper. Like many from here he had emigrated and in his case lives half the year in New Zealand with his wife. “but not any more government spending of course “….. He showed us pictures of his eco home development up the hill.

The settlement was full of very old olive trees and flowering bougainvilleas, oleanders and more exotic potted flowers too. We saw large butterflies and listened to the donkey up the hill singing like Pavarotti.   We did the laundry at Chef Johns up the hill, which dried immediately on the boat with our extra washing lines. ( we could not see why they offered electric dryers ). In the morning we heard the church service chanting and responses for an hour and a half. 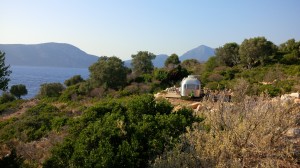 wine in the harbour bar, which they make themselves. We talked to a young Parisian architect, who had rented the shiny streamlined Airstream caravan which we had seen up the hill, nestling off grid in a clearing below a derelict windmill. “Not happy about your Brexit “ he said. This is not surprising, but I have read that French people, when polled this summer, are more than 50{2d6aa637a6e5275e985cb922686f04737151be25fa2b1e4e9fdc2413d33d685d} against staying in the E.U.  We read that the French economy has stagnated even before the June vote of the UK to make the Brexit. Strangely, the Greek economy, has grown by one percent, mostly they say, due to the holiday trade increases.