At South Bay on Kia Panagia we anchored tied stern pointing to the north shore. Sure enough, the winds gusted enough to make our doubled up ropes bar tight, but we did not move. Spending a week here we had time to enjoy the calm days that followed. The still water became as clear as crystal. We stared down at the many kinds of small fish – and I tried fishing on the bottom when I could see the shoals of larger mullet types visiting us undere the still shadow of Shearwater. Swish! The line shot out with great force – but the fish were smaller than a plate, so back they went.

In this marine park, the only one in the Aegean, there are over fifty species of fish and of birds. Venturing out in a strong northerly wind early one morning we tried sailing to re-visit the monastery bay on the east coast. The rollers with white tops were running into the narrow gap. For any harbour this means don’t try to go in. Keeping our boat at Salcombe for many summers has left us with the experience of watching small rollers turn into huge breaking waves as they funnel into the shallows. Then, by way of compensation for not getting into monastery bay, we had the excitement of watching an aerial dogfight. Two Eleanora Falcons attacked a seagull right over the yacht! They were swooping down at very high speed and no other bird would have faced up to them, so all the gulls dispersed.

The Monk Seals are an endangered species, and their sanctuary is on the next island of Alonnisos. I swam round the yacht when I saw the young one approaching, he shot underneath and stuck his snout between my legs. I only just got out before he persevered. Later, Sarah was not so lucky – he grabbed her with his flippers as she scrambled away up our ladder, shouting at him. She felt that he wanted to drag her down and have his wicked way with her.

“Nudger” as we came to call him, seemed to be looking for a mate…. Contrary to the advice on warning posters we had seen on Alonissos beach, other families were playing with him. For he liked to wiggle up to bask on their paddleboards. Lying flat, he would rest his head on their lap, as children stroked him. This is a “no-no” – for he is a young wild animal ! The warning showed a man with cut legs. And anyway, its time he went back to find a girl seal. He was very lovable, soft and smooth and good looking, about Sarah’s height, but with rather strong flippers.

We’d listen to the Cicadas and the goats bleating.  Rowing round with Sarah while  using her birdwatching binoculars we walked along the beaches of another bay which we have dubbed “pirate cove”. This is because I found the ruins of a byzantine lookout tower high above it. A garrison must have been put there in order to stop it from continuing to be a pirate’s nest. Down the slopes were shards of amphora. 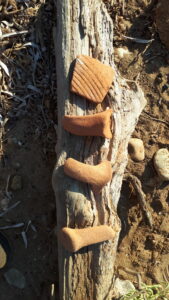 On the beach, one step away was a byzantine handle, another step – was another one. Another step: the ribbed curve of the top of a pot. (We left them all behind there of course.) Walking up the dusty track through the very old olive groves we picked sage for our pasta dish. There, motionless on a post, was a bird for Sarah’s expert identification – the Lesser Shrike. (She does have a thick book about all Mediterranean birds. )

Sailing westwards to the end of our cruise we passed Alonissos again, this time with the wind behind us. “Full and Bye” as they said in the age of sail. As a young teenager I used to crew on a classic yacht in the  North Sea. She was called Slor, which means in Norwegian ,  “ a fair wind, “ that is, a following wind . For us, this meant we could raise the “Sword of Shearwater.” It’s a large cruising chute with a sword on it. I had a spinnaker re-cut so we fly it without a spinnaker pole, thus only one person is needed on the foredeck to do the work. Its easy of course to raise a big sail like that in the wind shadow of the genoa foresail. But then to drop it later is tricky for one person, because there is a lot more power from the wind as the  boat slows down. The apparent wind from behind suddenly doubles in force ! And so we have a quick release at the foot. One yank and it flies out downwind harmlessly, in a beautiful slow motion floating action. 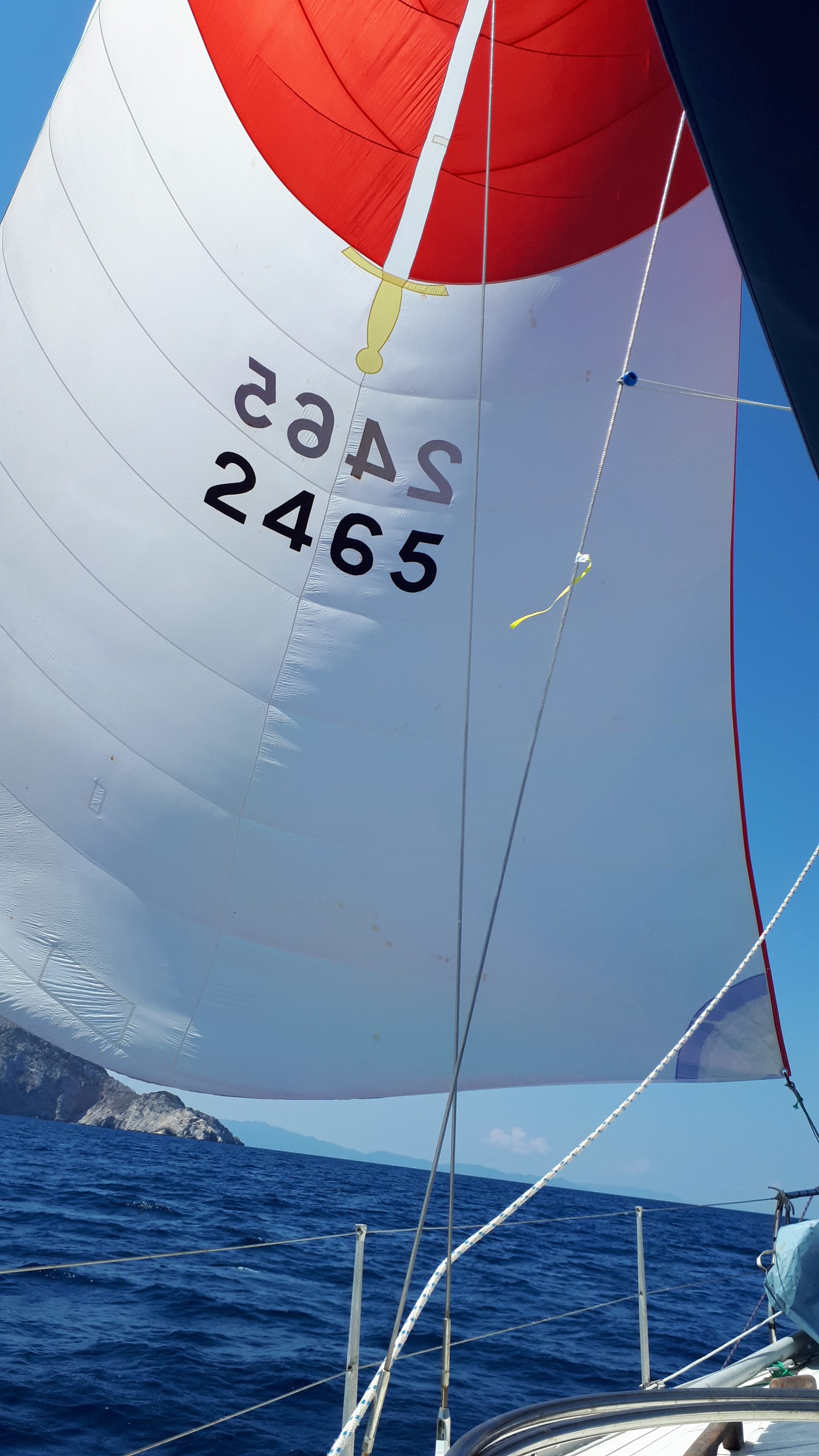 We glided between the islands with Peristera on our port. They say that Greece has so much hidden history, and yet again, right under us was an unseen trea 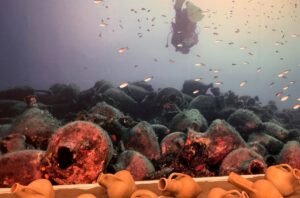 sure in the underwater museum. More than 3,000 amphorae lie there intact on a 5th century wreck. Its been dubbed the largest classical-era wreck, “ The Parthenon of Shipwrecks”. That’s putting it a bit strong, but all I have found is the photographs of the big heap of them.

Not being divers we are content to see their pictures. However, just here the waters are teeming with the Alonissos tuna. I tried spinners, plastic octopus, feathers. Just trailing them behind is not hard work but then in the past I remember that excitement of the white water thrashing out there. This time, no luck. There is nothing quite like fishing is there ? Ah, the unknown. So do I feel lucky today

But that serene gliding motion took us all the way to our port of Orei. It felt as if an invisible hand lifted us gently in slight surges eastwards with no effort. Just the sounds of  ripples of the sea and the occasional shearwater all afternoon…. We berthed and made the yacht ready for winter… she got dragged up on the beach trailer to the yard one calm morning. Shearwater is tucked against a fence by a tall crop of sweetcorn. On the other side an orchard with ripe plums. At the entrance a stream that was full of large terrapins and frogs. The abundant wildlife was just a bit too real when one night a rat climbed up the hose pipe. Sarah chased it away with the rounders bat. Of course we have left the boat with no pipes or chain hanging, and hope there will not be unwelcome visitors chewing into our wiring this winter. She is there until our return in June.

Evia seduced us to hire a car. We explored inland through the dense pine forests and along the ravines. Bags for collecting pine resin hung on the scars that had been made in the black bark . Banks of beehives flanked the narrow mount 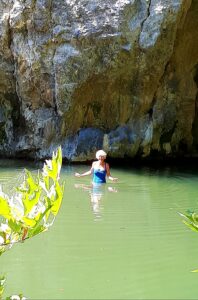 ain road. Pine honey from the minimarket had become our favourite flavour.  We walked along a footpath into a valley of trees which overhung  a rocky secret pool. There we swam under the waterfall in the clear sparkling water, green with reflections of trees. We sat in the sunbeams glittering with dragonflies, with our feet in the water where tiny tiddlers swam.

A hot spring gushes into the sea at Loutra. It was scalding hot as it cascaded into the rock pools from an opening in the promenade wall, about the size of spreading your arms .  It really did gush in a torrent. Most of this centre is of modern framed construction, with a few remnants of old world turn of the century hotels, rather dusty.. Although there are modern bright spa hotels which take some of it higher up the slopes of the town, we opted for the natural sea where we lay in scallop shaped pools. Our head was in the heat, our feet dangling in the warm sea. Some large football sized jellyfish seemed to like hanging round there too. It is said that they don’t sting much.

By way of making good use of our time as in the past when we had visited Delphi – we left early to visit Athens. A city in the grip of COVID, and as it turned out, not very busy. So we again marvelled at the Parthenon, and there were not very many other people. It’s the journey not the destination, as they say.