SUMMER 2020 – ENDING OUR CRUISE IN ATHENS

The hotel Plaka promised “a view of the Acropolis” from our room. Sure enough it was there, all lit up as dusk fell, with the Parthenon on top in silhouette. We got cocktails on the roof terrace and watched the rock and the sky from a big sofa. The roof bar was closed to outsiders, so it was deserted. Looking at the most famous building in the world out there, it seemed as if it was… just for us to enjoy. 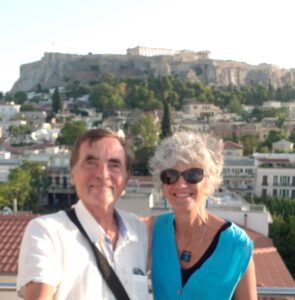 The next morning at the opening hour of 8am we were in the first handful of tourists to enter the site. It still has a jaw dropping entrance way, up the steps and reaching the summit. As the American architect Philip Johnson once wrote, “A project needs a JC entrance….. “ This stands for how you drop your jaw and say Jesus Christ!” This day was a big treat for us after previously crowded visits … how to see it slowly. It is a staggering achievement to have been built and for the design to have included such eternal beauty. It has subtle curves so that the base is higher in the middle by over 2 inches (60mm). The columns have a curvature so gentle that a compass point would be a mile away. In a film of the restoration project it has been explained that the lintols above those columns are not square to the ground. They follow the curvature too, and like the columns the outer edge slopes inwards a little. So every beam along the top is different. Getting a new one in place up there is costing over a million dollars using today’s technology. It has been estimated that each original fluted column would have cost over two million. There are 46 outer ones. More than 200 masons worked on it (plus all the support trades) and yet it was built in less than ten years…. It has been speculated that they had extra sharp chisels.  After the actual building another quarter of the labour had to score the marble slightly, so as to reduce the sheen. 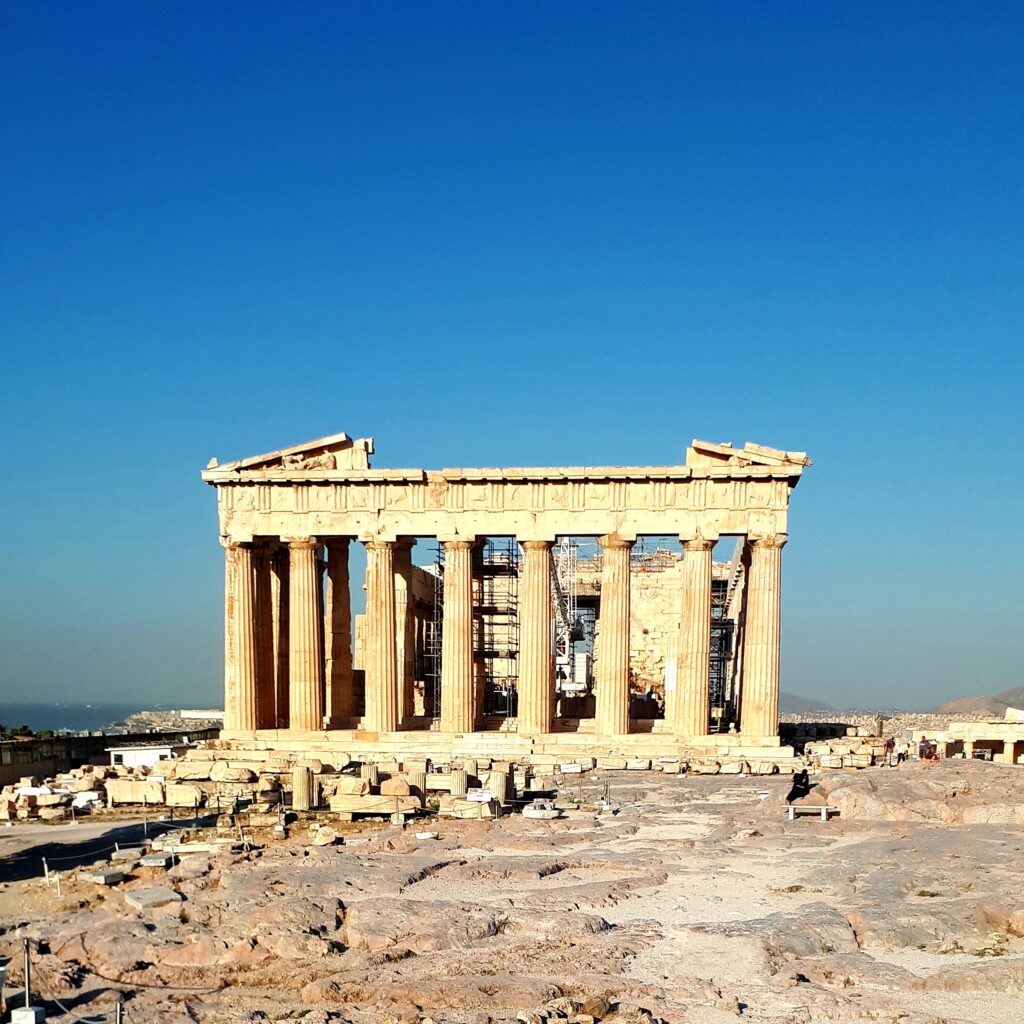 The reasons for building it arose following times of great strife. The Persian hordes of Xerxes  had been defeated at the sea Battle of Salamis. Athena had protected her citizens when they fled and yet the city was sacked. The Parthenon was built when Xerxes withdrew, and it created a magnificent interior for a new golden statue of her. More than 200 islands were by then paying tributes, or protection money to Athens. The city made this temple ( which also became the treasury),  to state that it had recovered from the invasion and then had achieved immense wealth.

460 to 430 BC was the golden age. During this period, Pericles ordered the construction and restoration of a series of magnificent temples and buildings on the Acropolis. He died of illness and later, in less than one generation the Spartans had won the first of the Peloponnesian wars. The Parthenon did not survive in use for very long.  In its life time the building was used for other things, such as a Mosque under the Ottoman rule, and later as an ammunition store which blew up under Turkish cannon fire. The thousands of fragments were strewn around the site. 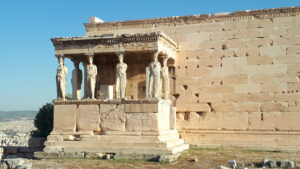 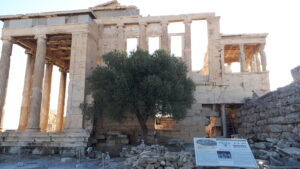 We moved to step down into the lower area behind the temple of Erechtheion. Looking behind the female columns, their hair style is clearer and the plaits show. Down there is the olive tree, a gift to the City from Athena. Er, it looks less than a hundred years old, but there it is, and the side of that temple was planned to create a niche so as to not spoil the original tree.

The Acropolis museum is a treasure house of sculptures from the classical world. Julius Caesar glared at me. The young Alexander the great seemed very boyish….At the top level there are spaces shaped like the pediments of the Parthenon. They are waiting for the return of the original marbles taken to the British Museum by Elgin…

Its hard to imagine the rituals in front of the Parthenon because the rocky surface is so uneven. Not many Athenians could have squeezed up the ceremonial steps in any case. 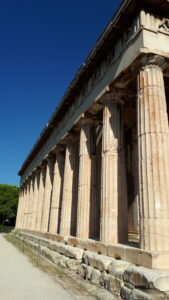 ing ourselves over to the Roman Forum in the increasing heat of the morning we sheltered from the sun in the long colonnade of the museum along one side.

The nearby Odeon is absolutely enormous, and it was easier to imagine crowds using it even though it’s only knee high. At the other end we sat some time in the shade of the temple of Heraklion. It stands almost complete. Sarah spotted an apse inside it. An Apse in classical times? Reading the notices we learned that the interior had been re-modelled for other purposes. The astonishing thing still standing around it were the huge ceiling beams. I did not know stone could span that far. 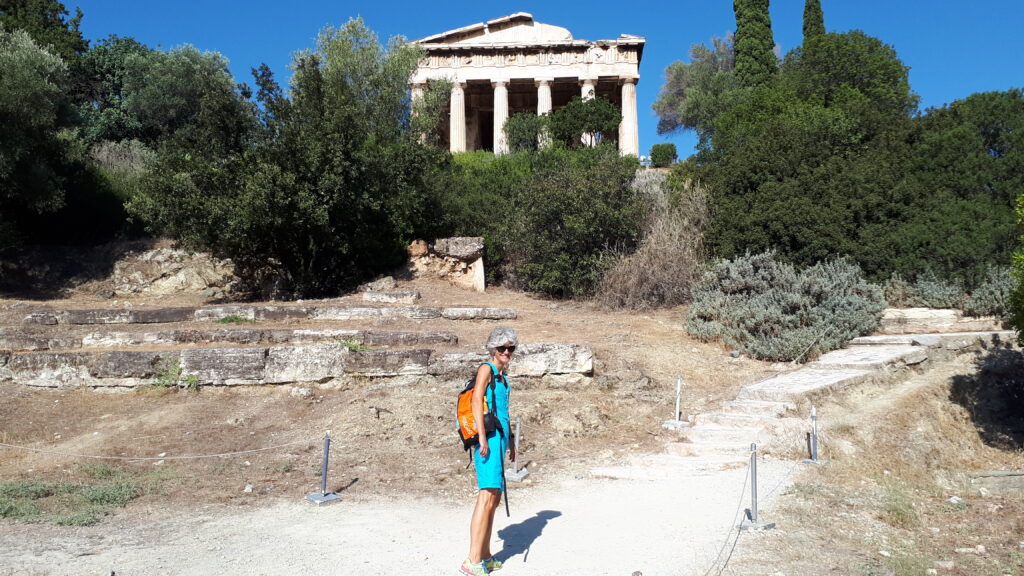 In the full glare of the sun facing the forum were cafes that had cool water mists spraying from the edge of their sun canopies. We chose one which in addition had mist spraying out of big fans. There were almost no customers. As usual across Greece we tried to order water in a re-useable bottle. Not much luck in Athens, though in our harbour period at Orei more than half the cafes kept water in the fridge in a glass carafe. We do this at home. On Shearwater we never bring single use plastic water bottles on board.

To try and get tap water in a glass carafe caused a grumpy glare usually. But then again, Greeks sound to me as if they are arguing with each other even if they are just chatting. “ The effect of COVID has given me almost nothing to live on,” said our waiter Georghiou at a low cost  taverna we have used on previous trips. “ For 11 weeks I have survived on 400 Euros. The state is not helping enough, more should be done.” It’s called “The Traditional” and seems to be a local and student place. Though, unlike at Orei port, a lot more beers were being drunk.

Out in the packed streets the Athens young life was heaving. Fashion shops looked glitzy, yet empty of customers. The crowds walking past had already done their shopping. There must be quite a lot of money around, even though there were almost no tourists. In the summer the political party who had endured the unpopularity of imposing austerity was replaced by a more right wing government. At the same time, just before COVID struck, the economy was growing at enough (modest ) percentage points for international borrowing to be resumed. I wondered what they will spend it on this time, for Greeks still have the reputation of not paying taxes.

The borrowing crisis and the austerity that followed caused riots and street fires in Athens. The financiel crisis developed when the government had sent the country on an unsustainable fiscal path. For example, salaries for workers in the public sector rose automatically every year, instead of being based on factors like performance and productivity. Pensions were also generous. A Greek man with 35 years of public-sector service could retire at the  age of 58, and a Greek woman (under certain circumstances) could retire with a pension as early as 50.

Perhaps the most infamous example of government generosity was the prevalence of 13th-month and 14th-month payments to Greek workers. That is, workers were entitled to an additional month’s pay in December to help with holiday expenses and they also received one-half month’s pay at Easter as well as one-half when they took their vacation.

The Approach to Athens along the motorway is lined with flamboyant commercial buildings. Unlike the more staid business parks of the UK their architecture is extrovert. Many office or manufacturing sites are fronted with glass, shiny steel and breathless fireworks of construction virtuosity.

The main income for the country is tourism. Yet this, now in the dark COVID year, must be winding down backwards again…..

We ate almost alone in a lunch time venue of over 200 covers. Tsiporuadiko had converted an empty wrecked building site into a shady delight by clever planting. “The name means the place wh 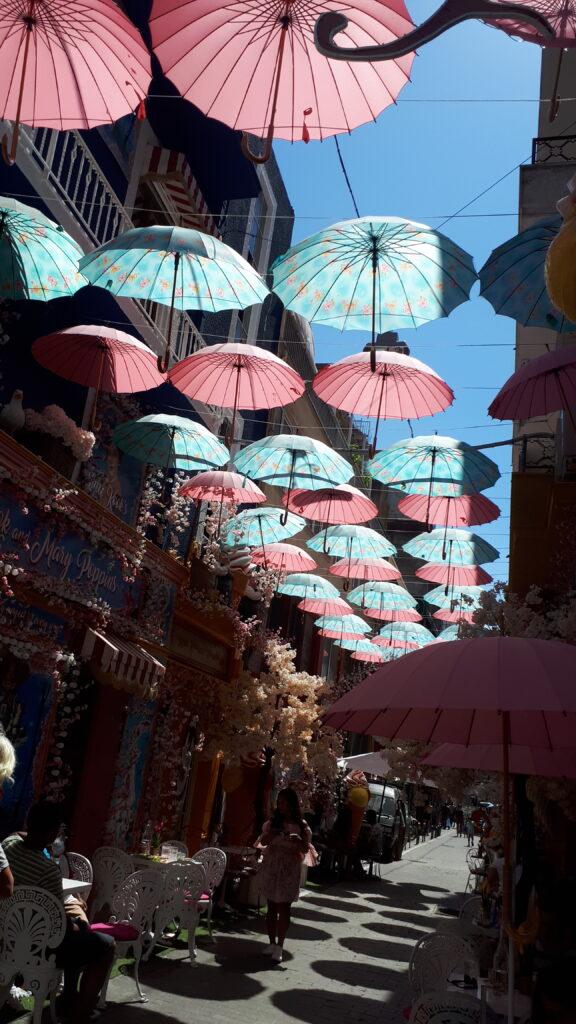 ere you drink tsipouri,” explained our young waiter Costas. Theatrical posters covered the damaged walls, for it is in the entertainment neighbourhood. The two of us enjoyed excellent creamy linguine piled high with seafood and a carafe of wine for a total 27 euros. We skipped the spirit Tsipouri for lunch.  The quirky style of the interior reminded me of turn of the century nostalgia, where myths meet fairy stories. As we left, we walked through a street devoted to a Mary Poppins theme with parasols above us and the waitresses looking very hot in period outfits. Although this had nothing to do with Athens, or heritage (!), it was packed.

Our departure was well organised with the pandemic precautions. We had an hour in masks on the almost empty metro , then two hours masked in the airport, partially closed, then four hours masked on an Easyjet plane. Finally in only half an hour, still masked we got to our front door on the shuttle bus. No, we did not catch anything !