The sailing pilot warns us of unpredictable high winds going south from the Aoleans. After all , they are named after the God of the Winds who gave Ulysses a bag with the instructions not to open it. When the crew did so, believing the bag to contain money, the ferocious winds blew him off course, and delayed his homecoming for many years. There is a description of him swimming to a safe landfall after the storms, as he crawls up a cool clear river with poplar trees. Then again, there are beautiful young women about who make him better. In such a river, in a long past trip to Crete, we experienced clear cool river water entering the sea. We paddled up it into the shade with small terrapins surrounding our feet. I had never before seen an unpolluted river entering the sea. 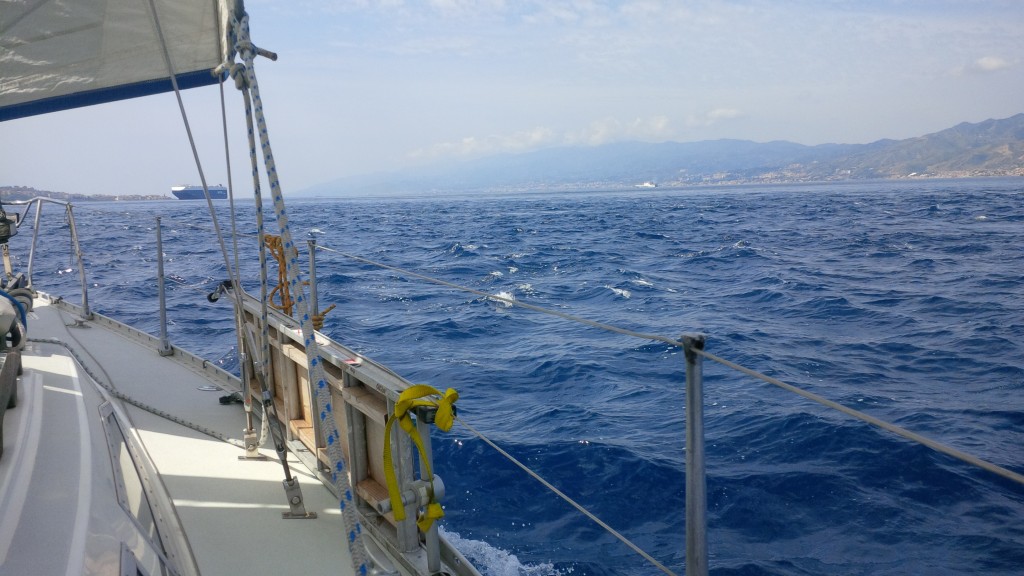 So these winds, not being forecast, do arise at the corner of the Straits of Messina – and a 50 knots gale is mentioned causing a yacht to surf into the straits under bare poles.  None of this happened to us. We rounded the corner in a haze with some sun leaving Messina and the anchored freighters under our engine power. A gentle breeze from the north helped a bit until with 6 knots of our speed, added to the 4 knots of southwards spring tide, we moved into the whirlpools at 10 knots.

If we had got the tides wrong, our day would have been very much longer…. our speed over the ground being 6 knots 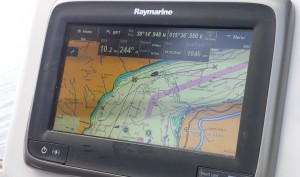 minus 4 of tide – resulting in 2 knots speed over the ground instead of 10 knots.  That would make a 6 hour journey five times as long…. taking us into an overnight passage.  Working out the tides in the straits requires a simple sum based on knowing the time of high water at Gibraltar. We are too thrifty to buy paper almanacs – this information is all on the internet. We knew it was springs, because of  watching the full moon in the calm bay of Tindari.

The whirlpools then, are marked on the charts as small squiggles, and in reality are quite mild. The yacht entered slightly choppy water and turned unpredictably. But with the engine on it was not much of a delay. Not so for Ulysses, when his boat being rowed was trapped between a rock and a hard place – a saying we still use from the description. On the shore was the evil Scilla. Down in the sea were the sucking whirlpools of destruction.