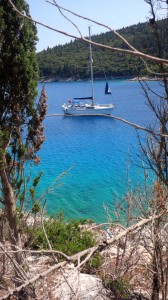 We motored north for the morning, before the wind and waves could set in against us, and found a bay near the top of the island – called wasp bay on Jamie’s notes. The tourist map calls this Dolchida bay, a narrow inlet wide enough for two yachts to swing. Some larger boats were tied to a quay higher up – we called them the shouty boats after they chased newcomers away who tried to anchor near them.

This side of the island was green with the Cephalonian Pine (though it is common through all Greece). Under them grow the maquis, spiky mixtures of holly and thorn like bushes. Here and there would be the tall thin cypress reaching for the say above. At the head of the bay, an olive grove was a paler green, and the ground cleared beneath the trees was salmon coloured soil, terraced with low retaining walls made of round stones. Not only does this help the harvest work, but we have read elsewhere that it is necessary to clear the land to reduce the spread of fire.

We swam in the crystal clear sea and watched the skies for two nights. As we got used to the lack of light from 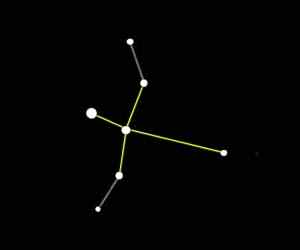 other boats for the first time this holiday we were able to see the navigation triangle of stars appearing. Deneb, Altair and Vega make their appearance for the 40 minutes of dusk after sunset, while it is still possible to see the horizon . When I was studying the two years of night school for Yachtmaster Offshore and Ocean at Brunel Tech in Bristol I bought a sextant in order to practice out of the lecture room window. That went afterwards on eBay – but just for practice we try to find the stars.  The starfinder app on my blackberry is a good start for this, but this night we got no further than Deneb – which lies in the constellation of Cygnus.  If you like  ancient tales, please read on.

There are several different stories associated with the Cygnus constellation. One involves the Greek mythological character of Leda who was the Queen of Sparta. As with many ancient Greek myths the amorous advances of the King of Gods Zeus plays a major part in the story. Zeus would often disguise himself as an animal in order to win favour or trick the objects of his affections and this legend is no different. 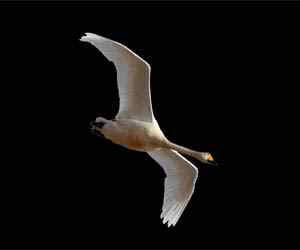 This time his eye was drawn to Leda and he took his chance when one day when she was attacked by an eagle, so Zeus disguised himself as a swan and took the queen under his wings. Leda later produced two eggs, with a set of twins being born from each, from each egg one sibling was fathered by Zeus, the other by the King of Sparta. From one egg the brothers Castor and Pollux emerged and from the other the twin sisters Helen of Troy and Clytemnestra were born. To celebrate the births Zeus placed the swan amongst the stars.

But there is another reason that we look to Deneb. In the constellation of Cygnus I bought a certificate for  a star to be named Starship Sarah – which has always been my nickname for Sarah since before we married. “I suppose, “says Parrot, “that is because she was always in such a hurry – a fast lady….”