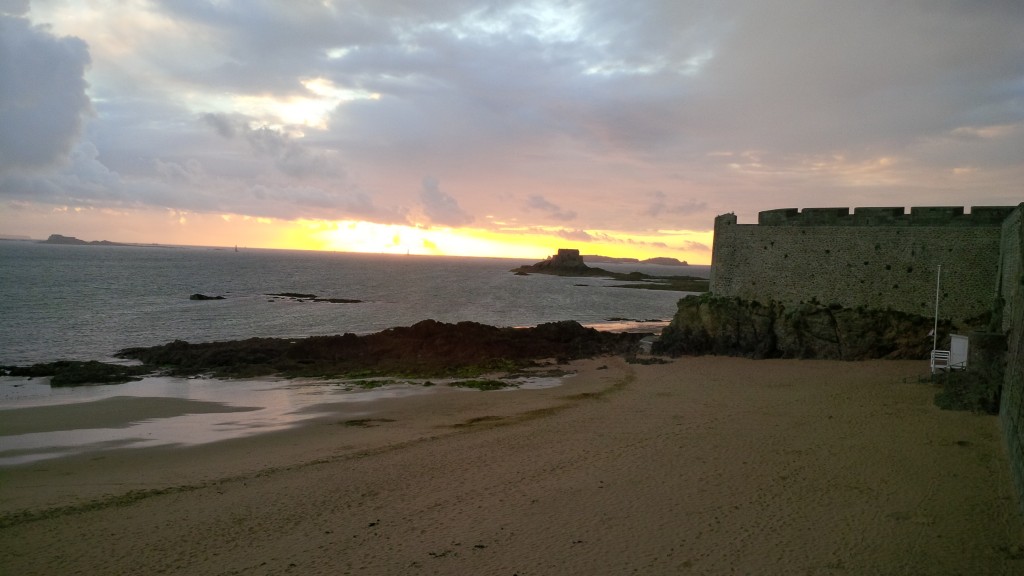 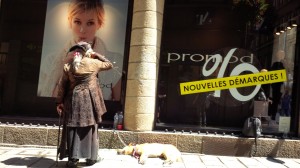 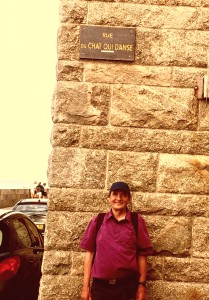 On a bright day with a NW wind we sailed for St Malo. Rolling waves from behind caused some sea sickness, but all was well in navigating the webs of rocks outside, with a cross tide too. Except that the engine failed to produce power just as we entered the lock. 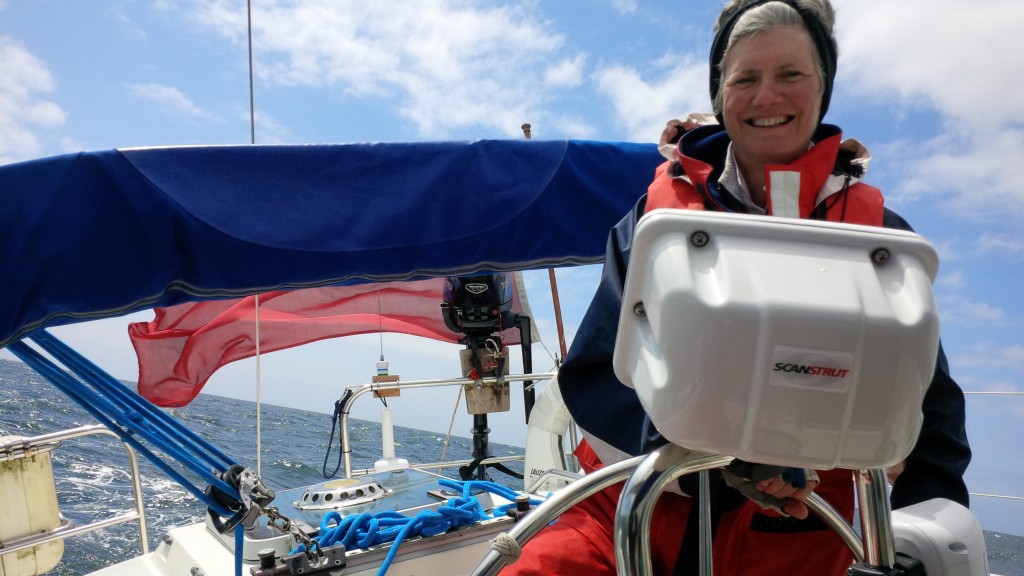 Shearwater was slowly made snug in the inner harbour below the town walls, and the next morning Jamie, our crew,  walked out of the port with his rucksack to hitch to China. (which he did, all the way, and back to India).  Passing through the high granite walls at the main gate reminds us that we are in one of the centres of piracy, or “corsairs” as they were known in the 18th century. Why if that isn’t a real pirate on the first street corner, begging for money. On the left and right are pirate sweet shoppes, clothes shops and nick nackery, all repeating the main theme – you get the idea. The town was re-built after intense shelling at the end of the war, on a generous grid with clean squares and apartments upstairs. They seem to have very few lights on, being second homes for Parisians.  But in one corner to seaward is a treasure house, an original corsairs mansion. It is built like a honeycombe, full of holes, entrances and secret chutes, with multiple cellars and passages to other houses. Even the main rooms have wall panels which swing open to show secret  narrow staircases. Business was done up dead ends in soundproofed small half level rooms,. For these corsairs, don’t yer know, not only carried letters of marque (their course)  from the king, but had to pay duty when they brought stuff in. Er, if they declared it , that is to say, before some of it would disappear down side chutes into rooms which formed a duty free route to other houses.

Near the house are dockside bars (Rum, cider, noisy rough dives), and we  walk from these to the scene of a great duel – on the castle forecourt which can only be reached at low tide. On this very spot the corsair Robert Sercouf fought with Prussian soldiers in 1817. They occupied the town, you will remember, just after the battle of Waterloo which ended the Napoleonic imperial regime in 1815. So a group of 12 Prussian soldiers were overheard to insult the French. Whereupon Robert, a wealthy trader and  corsair, leaps into them with a chair belting them about the head. something which I remember from Liverpool bar room brawls. “I AM SERCOUF!”, shouts he, “I do not fight with chairs, I duel with zis sword,  and you do not insult ze french. I will see you at dawn and here are my seconds….” Next morning he duelled and killed 11 of them. The final man’s fate was to watch his hand  disappear into the sand, as it was taken off with one swish of the sword. “I spare your life, you are the youngest,  so you can return to tell people what has happened here today”.

Staring across the low tide landscape of weed and rock, from this once bloody patch,  I can see the reefs revealed as the huge tides here have fallen. The range is over 11m in height. The rocks I see now caused the defeat of a cunning plan by the royal navy  at night on 29th November, 1693.  In the time of King William the British spent over two years on the Thames preparing a 300 ton barge of explosives. Their goal “to finally exterminate this wasps nest of pirates”, for the town had been fortified with the huge walls built by the famous engineer Vauban. A plaque near the corner by the Rue du Chat qui Danses commemorates this, for the locals are still laughing at the attempt. The o 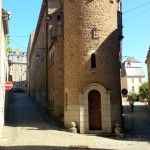 nly French casualty was a cat, hit by shrapnel, when this awesome explosion went off prematurely. There was a squall of wind and in the darkness the barge hit a rocky reef. The water was full of dead English mariners, while the rest of the fleet was seen to sail off back where they had come from. In the town, night was turned into day, and the locals cheered to see that the attempt had failed.  Fr 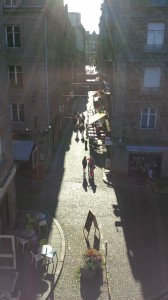 ench corsairs from St Malo remained a big threat to the English for another century. Captain Pocock, out of Dartmouth, our home port, was finished off by a French corsair’s cannon ball, and never returned to see the fine house he had been having built at  Sharpham. Then again, this was being paid for by his prize money from an action against a Spanish treasure galleon. They in turned called the English Royal Navy…. pirates.

Friendly locals, after complicated translation conversations, helped us to get a new diesel pump, by courier from Germany. Our expedition to collect it from a big truck depot was achieved by Sarah running while I chased her on the gearless folding bicycle. On the way back we crossed the hydro electric barrier which harnesses the tidal flows. We wondered why we have not built one in Bristol when the French did this many decades ago, and our tides are almost the same. Perhaps our plans are too ambitious, and there are too many ecologist’s objections. The mayor of Gravelines on a similar subject where the French did not consult the local people about the new nuclear power station once said , ” well, we do not have to consult ze frogs if we wish to let ze water out of the pond…” Rather appropriate for a Frog to say.

After filling up with cider, and sauvignon, eating seafood, cheeses and crepes, we departed with, of course, a headwind in the way of our nortwesterly course. Just one more hitch hindered our exit, when some confusion occurred about whether the lock times were written for “in ” and “out” from our point of view, or from the point of view of an outsider. So we rose at 5am. There was no need, because we hovered about for an extra hour, only to be beaten into the lock by two large tugboats who got us out of the way at the entrance by a sharp whistle. (is that in the French navigation signals? No it is not).  My friend Bordeaux Pierre warned me that we can tell the lock-keepers by their red noses – because they drink so much red wine…

Shearwater made a fast day passage to Guernsey. The speed over the ground at one point was over 10 knots, and Sarah was steering at over half that . Quite fast for us. We had stayed long enough in St Malo to have a fair passage, but later we met a French family who said they felt trapped by the prevailing winds which blow into  St Malo. Did not seem to bother the pirates did it? 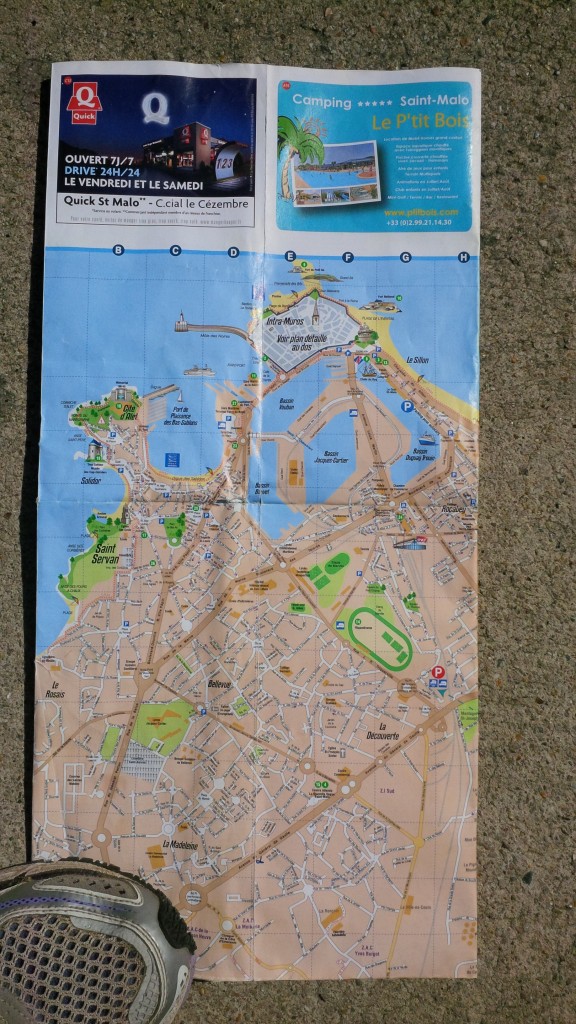 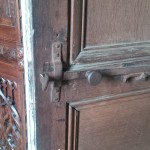 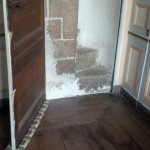 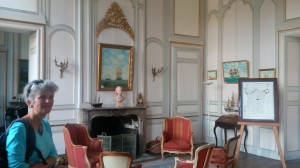 One Response to “St Malo”