Its so nice to re-discover how easy the spring cleaning was in this hot climate. I had forgotten how many things we had fixed…. Culminating in a stern hose spray tap for after swimming rinse. This being a one of many treats after our first swims this week.

The yard is run by Sia, who fixes things and always has a smile. Its charming in a  ramshackle way on a beach, with about 70 boats propped up on rusty frames and wooden poles.  Sia made her small buildings clad in flowers, and has just done new showers. Nothing is too much trouble, for example, gas and fire extinguishers were delivered.

Being launched on 2nd June was quite a helter skelter ride down the beach pushed by grizzly old Petros on their trailer by a smelly old land rover that should be in a history museum. We did not mind the misunderstanding of which day to be going in, because in calm weather we anchored outside the nearest small harbour for the night. The Chalkis bridge to Evia only opens at midnight, and then charges 30{2d6aa637a6e5275e985cb922686f04737151be25fa2b1e4e9fdc2413d33d685d} extra on Sunday, and then only if enough boats want to go. 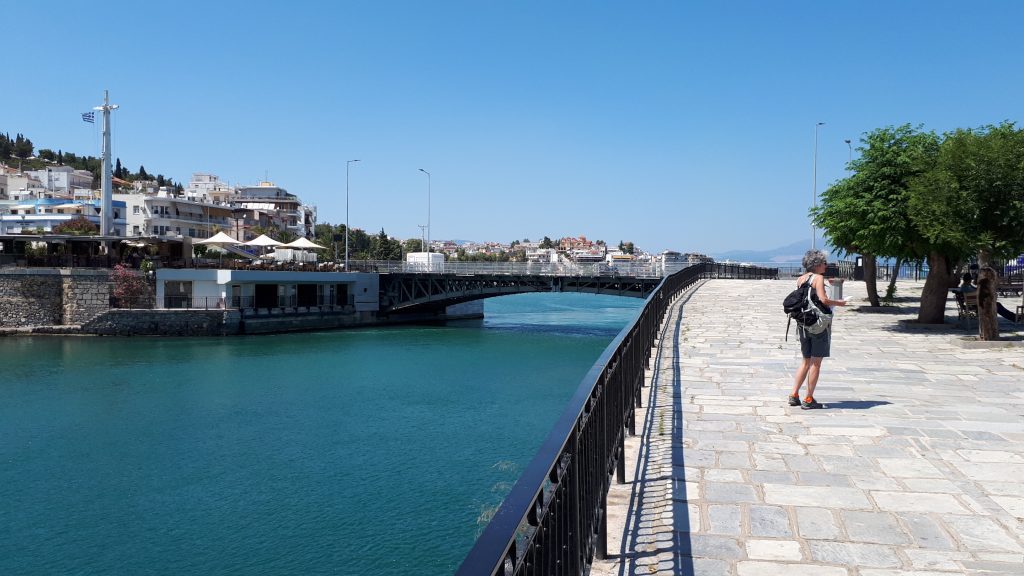 So we got there in good time to tie up on the quay and find the harbour office for paying 30 euros. As we have found twice before , the entrance is not in the front, its round the  back street. We had a long lecture from two stripes boss, and he promised to call us at 10pm. 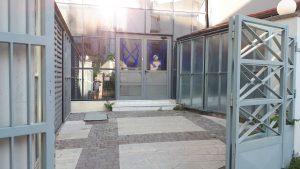 By 11 there were about a dozen yachts circling round and still no message, but at last the list was read out for the order. Order, what order, it was like a race start. Luckily we know our colregs and our racing rules, so we stood on as they say, while mayhem developed  behind us. By 12.40 we were anchored in a large bay in 5m of thick mud, flat sea, nice and safe.

With good weather we motored for a few days north in the channel  stopping to anchor, watch dolphins, jumping fish and a couple of large turtles. Ah yes, this is meant to be a sailing holiday, and it will be when we get right round the corner to Skiathos. For the moment, knowing that white tops on the waves and the prevailing head winds make it prudent to just move in the mornings  before it  becomes necessary to thump into head seas with spray over the deck. We only turned back for one day and shot down south with the genny up surfing on the rollers. Who minds when we have lots of time, again at Ay Yeorious bay, and early anchoring means a nice swim and perhaps more stuffed aubergines with chilled rose.

To Orei, our last stop on Evia after the mountains of this isand that are amongst the highest in the med. It is a friendly modern village with a quay lined in an avenue of trees between the bars. Vasilis, the casually dressed harbour master was a village local, and as Sarah wanted meat,  “ You can try  the bar of Giannis. All the others are sea food. “ He struggled with his internet to record us paying  8 euros. “ It’s down again. Here is a paper receipt. “ The grilled lamb was good and the meal rounded off with a pommegranite liqueur – new to us: it was dark , sweet and laced with aniseed. This meal cost 23 euros including wine, which is about the same as they charge for breakfast in Dartmouth. 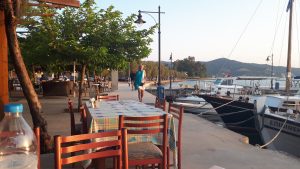 We did not mind the entertainment of watching flotilla coming in,  and the two in mast furling repairs being done on our quay. Along came a crane and whisked one out. True to their reputation the smiley supermarket couple delivered  a huge stock of wine and food, and even a gas bottle at 9pm. The garage arranged the friendly man with a fuel truck and after filling us with 110litres we felt ready for independence.

This we set out to enjoy the next morning, again arriving after motoring into the wind, just as the first seas broke over the yacht at midday. Our destination: this isolated bay on Trickiri with clear water, anchored in the calm while we see the white topped rollers crashing down the coast outside.

If I mention sea battles, Sarah says I will be paying for drinks…. But since you ask, two and a half thousand years ago, right outside was the Persian fleet  coming down the straits to invade Athens. Xerxes made a mistake yes,  they should’ve found this bay. They rafted up  offshore but when caught in the meltemi gale many of them were broken up like matchsticks because they failed to let go and get beached.

So we swim, write , eat in Ormos Andriami, as the ghosts of antiquity hiss past in the white surf. 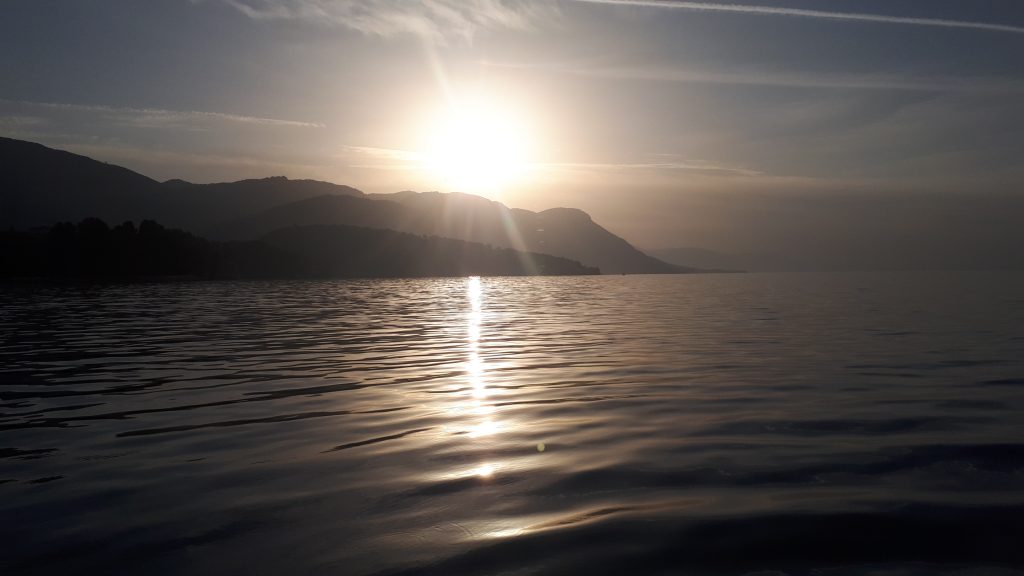