For our next day’s exploration of local history we walked through the more modern parts of Siracusa to the caves where the Athenian survivors were imprisoned. Being part of an old quarry they go very deep.  Strange shapes resulted from the need to follow the good stone which was in seams. The prisoners were starved, and most died from disease from the rotting bodies. The survivors were sold off as slaves and Athens had lost an immense amount of wealth, manpower and ships.  Why did such a huge effort get made in the first place? The answer is “Hubris”,   (in Greek tragedy) excessive pride towards or defiance of the gods, leading to nemesis. Athen 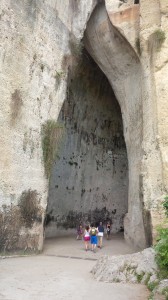 s was  a  rich city state, and even sent, in today’s money, £93 million in silver ingot value for the bribery to enlist the help of the nearby towns.  So their cunning plan had been to use Sicily as a staging post to Carthage, to outmanoeuvre Sparta.

Next to the caves we walke 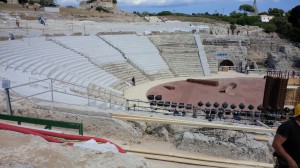 d through the centuries of history that followed those events. For Siracuse did eventually become Greek. The Greek theatre is one of the largest in the ancient world seating 15,000. We saw the preparations for this year’s  bi-annual events as they installed wooden tiers to replace the damaged stone ones.

And then later came the Romans. A famous invasion that the city’s most famous resident, Archimedes, tried to thwart with his inventions such as burning rays. He was killed by a soldier as the city was overwhelmed.  The largest Roman legacy is an amphitheatre just next door. It has a pit in the middle, for which nobody knows the use…. to sweep away blood?  Around the entrance are stone plaques that name some of the people who funded the works there.