Drinking a cappuccino in the square called “July 25th” I wondered, why name a square after a date? It is the day that Mussolini resigned in 1943. A  short walk from 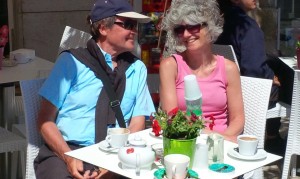 the marina, the square is between the food market and the old town. The daily food market there is said to be the best  in Sicily. There is a lot of shouting and singing,  and mountains of sea food. We tried the winter fruit, Loquat. We bought chocolate from Modica there. It is the original gritty, salty recipe from the Aztecs of

the New World, which started here first before the north European makers added other things. Some people say if you eat it you lose weight…. And at one end is a deli where interesting cheese samples are handed out in order to tempt buyers.  It works – there are long queues.

Inspired by the sight of all that market sea food we celebrated my birthday at at Dioniso, in Via Claudio Maria Arezzo. It was a short walk from the harbour up a warm soft alleyway with boutiques and art galleries. The stones look soft because they are much eroded in a mellow cream colour. On closer ins 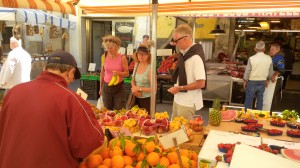 pection the conservation architect in me could see how the walls between them have been rendered with thin coats of similar coloured topping. As it crumbles and peels the effect of old and new has a friendly feel, as does the Ristorante Dioniso. The elderly suited owner bent over each newcomer to speak quietly in English to explain his menu – which was only a little above average prices. The Spigole (Bass), was perfectly grilled  with fresh vegetables, nothing over-cooked. The wines were higher priced and also delicious, mostly from the mainland.

The squares and alleys are of hard wearing surfaces paved in the big local darker basalt stones with no street markings. Pedestrians and traffic have to look out for each other. Italians treat driving as a competitive sport, even at slow speeds.

Only on our last day this did not quite work out for Sarah. A small blue Renault pulled out in another free form square near the marina, 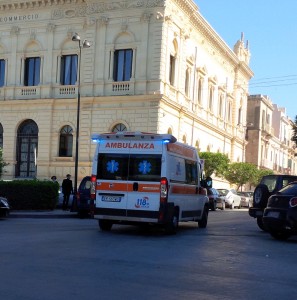 and hit her badly enough to need a hospital check up. After some months of nursing her bruises back in England she made an almost full recovery. The driver said,  “ I am guilty, it is my fault.” He was surrounded by Carabinieri, slow pot bellied elderly locals in grey, who took their time with a lot of paperwork, and then joined too by their inspector who drove up, wearing his black uniform with many silver badges.

May the fourth came and we read of star troopers climbing mountains in England. ( the forth be with you…) Our chart of Ionia arrived at the chandlers near the harbour just in time and planning the next legs of sailing away  we knew we  would miss Siracusa .  Many yachts were anchored in the lagoon, like Titan, and came in with their dinghies. It is safe except in strong southeasterly winds. Perhaps after our children have sailed Sheawater to Greece we might plan our return here .

This  is probably the best place in Sicily to see a lot of history, exuberant architecture, meet people, explore food and ruins all in walking distance. In one old church the local elderly Rotarians were hosting an art show.  I said to Danielli the local president, is it true that Mussolini made the trains run on time. I don’t think he understood my English. He explained to me that Italian 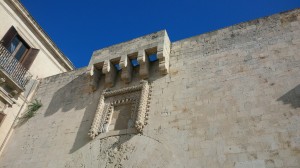 trains run so late they need a pregnancy test… His wife Giulietta chipped in, “ Italian men only think of two things. The second one is spaghetti.”