In search of the finest Baroque 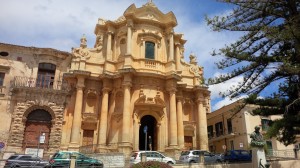 streetscape in all of Italy, we caught a bus to Noto and were not disappointed. This whole town was re-built after the major earthquake of the 1693.  All the main buildings are effervescent, show-off full Baroque pieces of fun. The designers re-located the town down the hill from the ruins – possibly not at the time wished  for by the devastated residents who were controlled by absentee landowners, mainly Spanish. On one side of the main street are areas of homes for municipal functions and management, on the other are for workers and functionaries.   But the principles that they used from a book by  the mainland renaissance writer, Scamozzi, went further than just fizzy facades. By the harmonious arrangement of spaces in front of each main building, and the pleasing composition of vistas, the full experience of friendly human scale is achieved. It is the ideal of “chiaroscuro”, the use of light and shade in mass and in shadow. 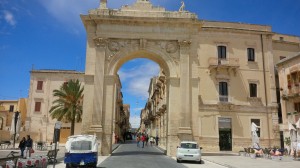 Parrot says enough of the master of town planning lecture, get back to fun.

We  sailed around in warm south easterly breezes, and then anchored for a lazy day in the large bay.  John and Mary had been with us for a week and were sailing friends from years back. How relaxing to be with people who know boats backwards. Things just happen and there is no need for instructions. If I had a drone it might be interesting to fly over Titan the superyacht that anchored  near us. She is in the fleet of Roman Abramovich, the billionaire Chelsea Football Club owner. In the evening muscular, unsmiling, blonde Slavic men with earphones and tight white “Titan 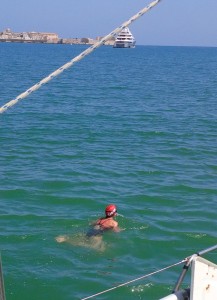 ” tee shirts stood at the walkways into the marina.

The lagoon to the south was the scene of the sea battles between the invading fleet from Athens in 415 BC.  The “Great Expedition”  lost not only all their first wave of   ships, but all the re-inforcements of another 73 triremes which were sent after Demosthenes sent home the message that all was lost, fever was spreading.  From our anchorage we could see the heights to the north of the town where he lost the nocturnal land battle. In the confusion of  an eclipse, the Athenian phalanx failed to keep their normally lethal formation.  Joining together in lines with shields and three deep rows of 5m long spears was often a sight so scary that enemies would just run away. But not that night.

We could not get the anchor up. Was it hooked into some two thousand year old wreckage?  An enormous new steel cable appeared, thankfully brought up from the 5m depth by the powered windlass. So a lot of up and down, some strength from John and some boathook work, finally freed us.