Rounding the pale stone castle at the entrance of the bay we suddenly left a rolling sea for a sheltered calm lagoon. It had been a downwind motor sail with some seasickness on the way. Parrot says next time anyone leans out of the cockpit to give the old technicolour yawn, they must be told to have a harness on…. not just asked nicely.

The marina gave even m 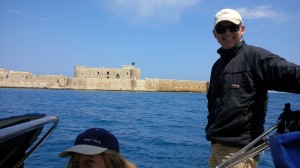 ore shelter though we had read reports of it breaking up in earlier years. Here we tied up stern to and there was room for a few more –we had booked by email. The cost of our visit was 60 euros a night as we were early, but the deal for the 6 weeks further was about 700 euros, with us not living aboard. Water and electricity was a   extra, we bought 20 euros wort 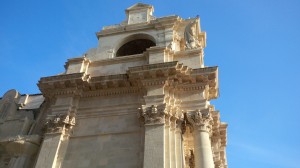 h for 3 days. We were not nervous because they appeared to have repaired the pontoon connecting bridges with stronger ones.

The old town of Ortega faced us, and we walked  up the narrow streets  of  small touristic shops and restaurants to the Duomo.  Inside is  not a striking interior. The columns have been re-built after the earthquake as large square forms of immense strength.  But as we approached outside past the Doric columns built into the north aisle, a few paces more brought us to a stunning effervescent west front of full cascading baroque features. The ages of stones from the side to the front span from 300 BC to the 18th century. A building that shows the passing of 2000 years. We had spritz drinks of Aperol at tables set on the clean travertine paving. It ran like a silvery golden river round the building and through the calm crescent shaped space in front. A bride put her flowers on the stone and began dancing with her groom. The parrot has promised me a drone like the one that recorded them from above, rising into the evening sky. 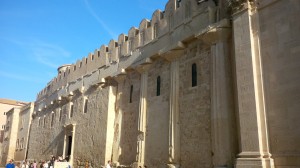