There was time to reflect on our Sardinia visit, and to wonder if we should re-visit more bays to the south on our way back.   We read the pilot notes: “A yacht passing down the east coast would do well to keep 2-3 miles off. In this way avoid the violent gusts down from the hills. Then again, if the wind is SE 0r  NE you should still stay off, as you will lose the wind as it is lifted by the hills, yet you will still be suffering the waves it has created coming at you from the open sea. “ 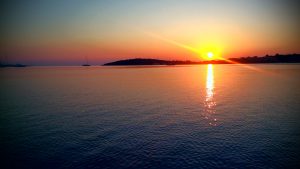 Pausanas wrote in classical times,  “ this island is an unbroken chain of impassable mountains. If you sail along this coast you will find no anchorage along this side of the island. Yet violent but irregular gusts of wind sweep down to the see from the top of the mountains.”  Only the top quarter of the coast has anchorages.

In pre-classical times this island suffered   many attacks, by the sea raiders who took slaves. And so the tough surviving groups of people lived in the mountain villages. Now something strange has been discovered about them. It is described in the website of  the Blue Project. There is exceptional longevity among the mountain villagers. There are twice as many centenarians here as in an average European population. A genetic quirk has been found, but the main reason is not in the genes. It is their lifestyle. Let’s start with :

………………….this is all good news. I’m still working on it. Starting with my goal to grow old disgracefully , ( drinking red wine).  This will culminate in  it being payback time with the 4 active children: family first and celebrate the elders – yes please.  On the laughing score I have a pretty good track record – awarded the chuckle cup at my breakfast club. Jamie has offered to write on my tombstone, “ did I tell you the one about the …”

Parrot has researched the darker side of  Sardinian heritage: the mysteries of the Accabadora. I ‘m not making this up, but if you are squeamish, skip this part.

In pre-Roman times these islanders would appoint a person of middle years to be the woman of death. This she achieved by suffocation, strangulation, or mostly the cudgel. The belief was that “only a woman can bring life, and therefore only a woman can take it.” She killed useless old people. Ah that explains the shift in genetic patterns here does it not. ?  Here’s more you won’t believe. It was recorded as still happening in the peasant communities in the 1950’s.

And there’s worse, just to scare you stiff from spending too long in Sardinia says Parrot. Ever wondered where the word Sardonic came from? “ Derisively mocking”,  or “ bitterly scornful”….or to hit the button : “grinning in the face of danger”.  While killing off the old people the islanders laughed. There was a belief that the sardonion plant administered as a poison resulted in convulsions resembling laughter, which was followed by death.

Still with me? Just a legend? No. In 2009 the University of Piedmont claimed to identify the hemlock water dropwort as the plant which produced the grinning rictus in death. This plant was used for the ritual killing of the elderly in pre-roman Sardinia. 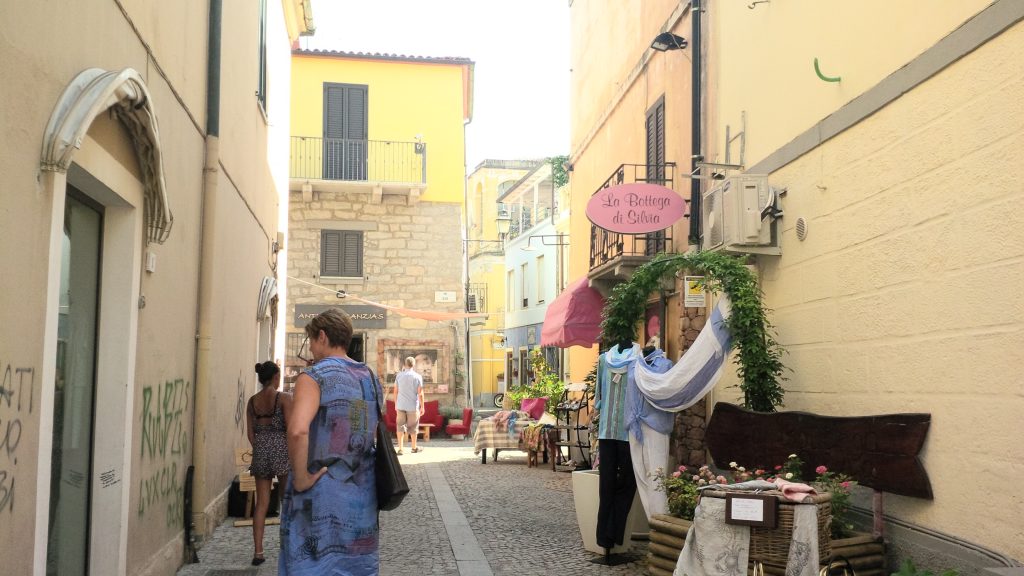 So we took Geoff our new guest of senior years up the Via Umberto, joining the passageata. There were no Italians who were not smart. We kept him tight between us in case we met a strapping lady with a cudgel . In one shop window I saw an Omega watch. ( but what is real and what is fake in Italy? ). One block away from the street the buildings became derelict and dusty. Next day along the back streets  we chatted to Dottore Ernesto in his chandlery. That is more pleasurable to me than looking at expensive shops. I keep seeing things I did not know I might like to get for Shearwater. 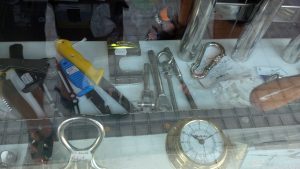 But on this visit we were on a gas hunt. Many times on our journey we have been given directions that are, shall we say, “ lost in translation?” Not just the directions, but whether it was even cooking gas. So he gave us his card and made that international sign of touching one eye… , “ you ask for the cash discount.”  He smiled , “ it is Italia, Italia”.  He was right, it was 19 euros, the cheapest yet for 2 litres .  That day the Greeks backed down to pressures from the Eurocrats. They accepted yet another European Bank austerity package.  Parrot asked if that is a money problem for them because they pay less taxes than even the Italians? The answer is yes, Greece being third from the bottom of the entire world list of taxpayers. Italians are up in the sunny uplands of being ok for Europe. About half way between those Eastern Europeans and those Nordic Scandinavians. – who is happier? Parrot cant stand those miserable  Scandi noir films. Give us La Dolce Vita   happy films instead please.

Dottore Ernesto suggestion about how to buy the gas reminded me of the special word we had for cash in Liverpool when I started my practice. Sometimes on Friday afternoons one of the graphics partners would put a chock ice on our desks, wrapped up in a ten pound note… “ that’s your bunce, “ he would say.  In later years I have taught Bristolians this special Liverpool word, and aways have to explain, it means “cash on the hip”. A small perk compared with news while we sailed that the rapper Snoop Dogg was found by the Italian Guardia Finanzia to be carrying $422,000 in his Louis Vuitton luggage. He was boarding a private plane bound for England. ( in the E.U. the maximum amount of cash permitted to be carried is 10,000 euros. ) So Calvin Broadus, said Parrot, using his real name, you are part of the magic money tree food chain now. Intending to spend all that moulah with people who won’t have to declare it to their tax inspectors?  I have been wondering how big the bag was to contain that pile of notes… 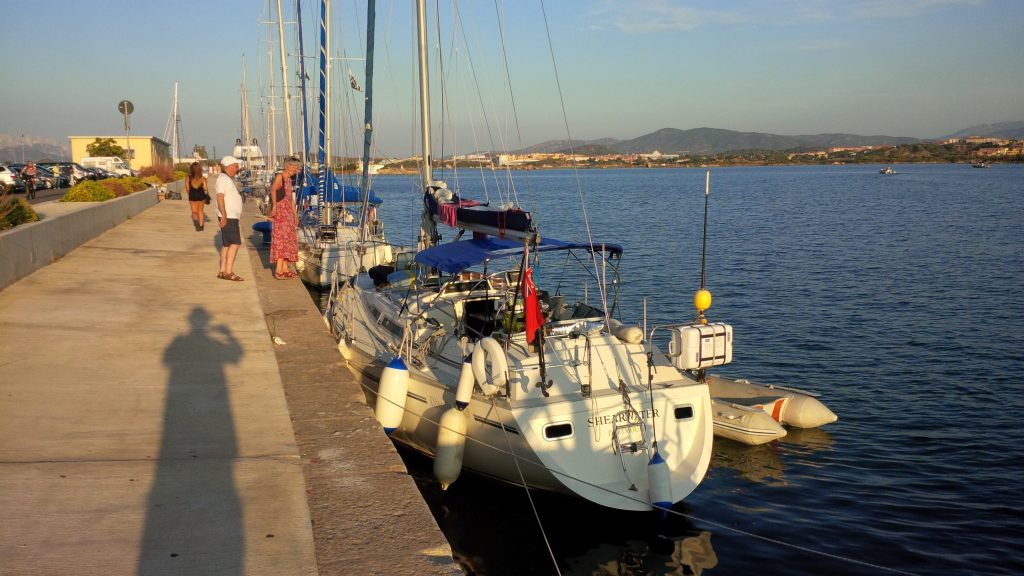 The quay was just a derelict town wall, and young people were there chatting till after midnight. They were less trouble than a charter boat next morning that crashed into us, while the skipper leader only just saved the gel coats from being scraped by doing a big pushing job.  Actually we did have our fenders out, but sharp bows tend to miss them. You never know even anchored, when you will be pleased you fendered both sides. After that we gave our crew, as we often do, a pep talk about not straining your back. ( sorry this is a recurring theme).   Don’t heave ho and push the yachts as tons of mass meets an immoveable object.  Dunk the do-nuts !!  Get a fat fender quickly and dunk it uppy downy to take the strain. A bit of anticipation is needed here to make time to untie one.

The lead skipper was voluble in French to us, although she was Italian. She was so sorry . then also she said that we could be getting free water at the marina downstream. Which we did. 400 litres .Though for the first time we had to borrow a hose tap thread adaptor. We had so many, how could there be yet another size ?

With quite a lot of fuel and water we felt pretty confident that we could go any time eastwards . 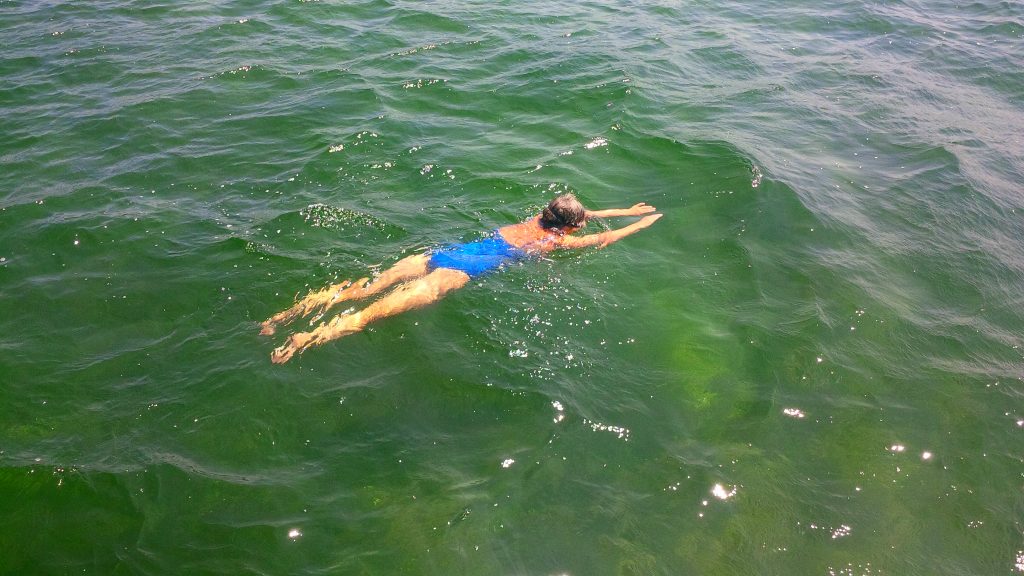