In the calm of the early morning, after the gibbous ( full ) moon had set the goats came bleating along the shore. Among them was a singular golden goat.  The boundary between legend and present life is blurred more in Greece than in other places. Perhaps he was a disguised descendent of  the dragon who was defeated by a bishop on Skolpelos in 300 CE?  ( I mean AD ). The bishop’s interminable Byzantine chanting might have driven the beast to this religious island where he became re-incarnated?  On that day, my spotting him was to be put to the test, for I decided that you make your luck if you pick the right combination of events…. The moon, the golden goat….. 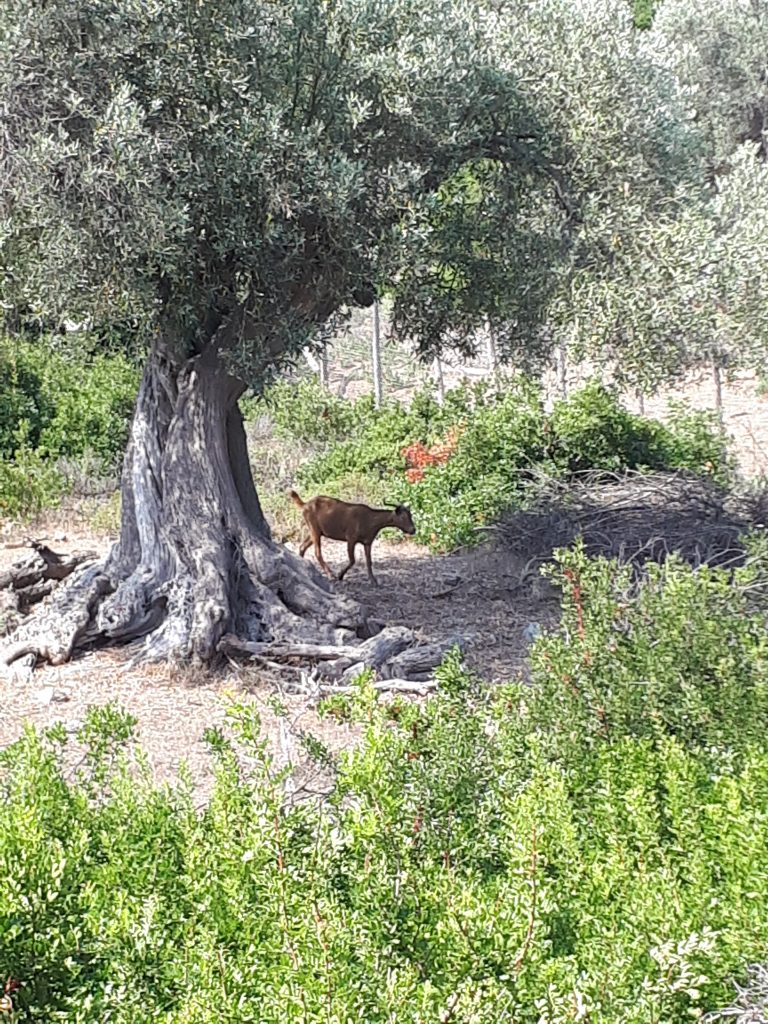 Lost in translation was a sign on the shore which Sarah told me meant that we could walk to the monastery in 70 minutes. It became clear by the time we were half way there on a two and a half hour walk… that it meant 7kilometres. 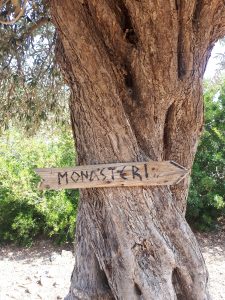 As Sarah became faint with hunger I persuaded her that the lucky golden goat would provide a nutty energy bar that she had in her bag. To her amazement, there was one, all forgotten. We continued up the rocky stream bed ( lost in translation again : it was not a “path “ as we know it.)

Some hundreds of feet up, we looked down into clear rocky bays on the way. Dramatic cliffs surrounded rich shades of blue-green sea. Eleanora falcons were patrolling high up and fast – magically satisfying Sarahs second wish. Occasional tripper boats  were heading north. They were like tiny models so far below, leaving white trails of wash in the sea. Sure enough, at the monastery, unlike previous visits, the courtyard was full of tourists. For those with bare arms a shawl is offered at the entrance gate. Monk Nickodemos was kept busy, and explained that monk Hariton had gone back to Mount Athos. Hariton had engaged us when we found out he had formerly been a waiter in Dulwich – and we had been hoping to talk more because of his excellent English. Anyway, he and I are both deaf, so we had compared hearing aids. 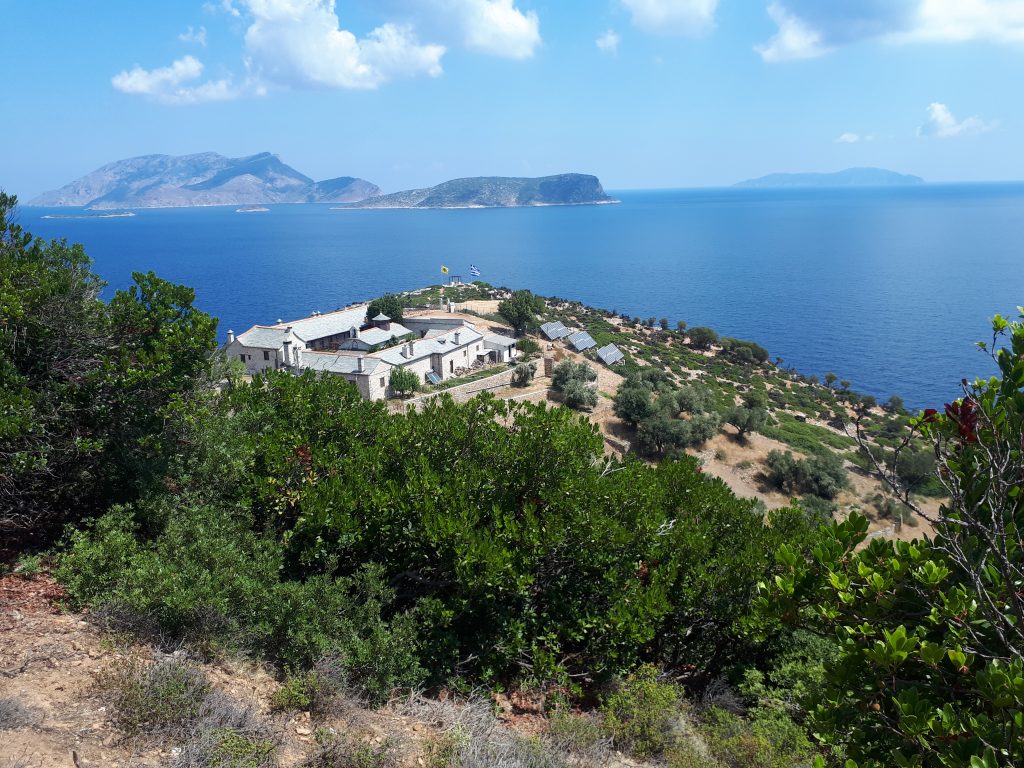 He told us the year before that more residential wings were about to be built over the other side of the island. These we saw on our walk, under construction, nestled in a hollow. The Monastery has been re-built, and for the first time in over a thousand years more buildings are now in hand. The island has large groves of olive trees – many look over a hundred years old. Traditionally the work has been done by visiting hands – but now the terraces of cottages in stone and chestnut with clay tiled roofs can be used to expand the work force. The goat herds have  become larger too.

Mount Athos is a very wealthy church, we were told by architect Georgiou when I quizzed him on his yacht in Alonnisos. He had designed another monastery repair, at over a million euros.  “the building programme in the Sporades is running to many more millions of euros, and the funding comes from Russia…”

After her two wishes were granted by the lucky goat, Sarah needed one more nutty bar for the return march back to Shearwater. “There won’t be anything to eat at the monastery…. “ she had said. But there was indeed a box of nutty bars on the shelf with the olive oil and honey. Wish number  3 succeeded. We were very hot and drank from the icy spring water tap at the lovely marble courtyard fountain. The water was raised by solar power from a nearby spring, and we could hear the soft hum of the Mitsubishi condenser behind it, also solar powered. 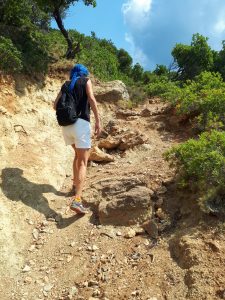 The wind got up, and we sat beneath the crackling of the twin flags on the cliff top, watching tiny yachts far below beating up the passage on their way to North Bay.

South bay was clear and calm, with shelter and myriads of tiny fish. Some Greeks from the next boat caught squid and beat them on the shores. The good luck goat re-appeared at dusk quite often. There is a story about the sailor who was offered three lucky wishes. His first was “ for a bigger boat “.  A load bleat issued from the shore, and suddenly he was sitting on a large Oyster yacht. His second was for “loadsamoney, so I can afford the yacht. “  A second bleat issued in a mountain of cash on the cabin table. His third wish was “to be irresistible to women. “  A final bleat – he was instantly turned into a chocolate truffle. 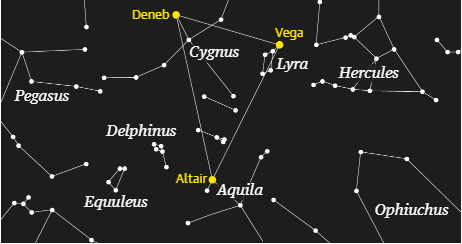 We tried to learn more star constellations when the moon was not shining so brightly. On a phone app of course. ( there was an intermittent signal, though we had been spoiled for the previous time amongst the islands with 4g reception. ) There was the summer triangle of navigation stars, Deneb, Altair and Vega, all appearing at dusk. The brightest of which is Deneb in Cygnus the swan. Not visible to the naked eye next to it is a star that I had re-registered as a gift to Sarah one Christmas…instead of a number it is now called “Starship Sarah”. ( My name for her when we first met – she has always been in such a hurry…)

Leaving those serene bays, we had mixed feelings, because our journey may not include them again next year. Days passed diving or imagining the byzantine community that was here. Up the hill at the entrance I found the base of a guard tower. The walls were of stone with added layers of clayware. Perhaps they had to bring up water and oil in amphora. But then they got built into the walls later when the garrison added the tower.  Just where I would have built it. In the bay below are shards of pottery, some larger than a hand. – all thrown back of course by us.  Our daughter Louisa can free dive to over 30 metres and she has found the largest pieces here on another voyage.

We sailed outside the next island of Alonissos in a light northwesterly, using for once our cruising chute, on which is the sword of Shearwater.  ( only its not really, it’s a swapped sail from a friends scimitar yacht  ). At the end of the island we practiced our fast drop, using a quick release shackle at the foot. Brilliant for a single hand to cope on the foredeck.

Still in blue sky, and in the usual strong swell from the north,  we closed the harbour of  Skopelos, hoping to spot more of those 200 churches.