Shearwater sailed into the strong winds up the straits along east Alonnisos. The green hills sat on folded rocks of ochre and cream with caves where the swell crashed in sparkling cascades of sea. We tacked in zig zags which doubled the time of the journey so that it took all day.

In South bay the water was calm and we anchored with our stern tied to the rocks on the north side. Into the gates of the wind. Taking advantage of the continued pressure, we tacked north again in 18  knots of wind round the west outside of the island that has belonged to the monastery for over a thousand years. The next coast would have been the three fingers of north Greece, some 40 miles away.

To sail into north bay we took a run at the passage, a dramatic throat which is only 87m wide. It funnels the north wind into strong waves and we surged in, riding the big ones like a roller coaster. And suddenly we were in the flat calm a big sea lake, 4m deep, where nobody has ever lived. Gentle hills surrounded us with patches of small trees and rocks. Between the low clumps of spiky bushes of holly the goats came down each evening to  the small stony beaches. Cicadas cheeped away with the sound of the goats only interrupted by the rattle of chains as about ten other yachts chose their own corners – most swinging free like us. 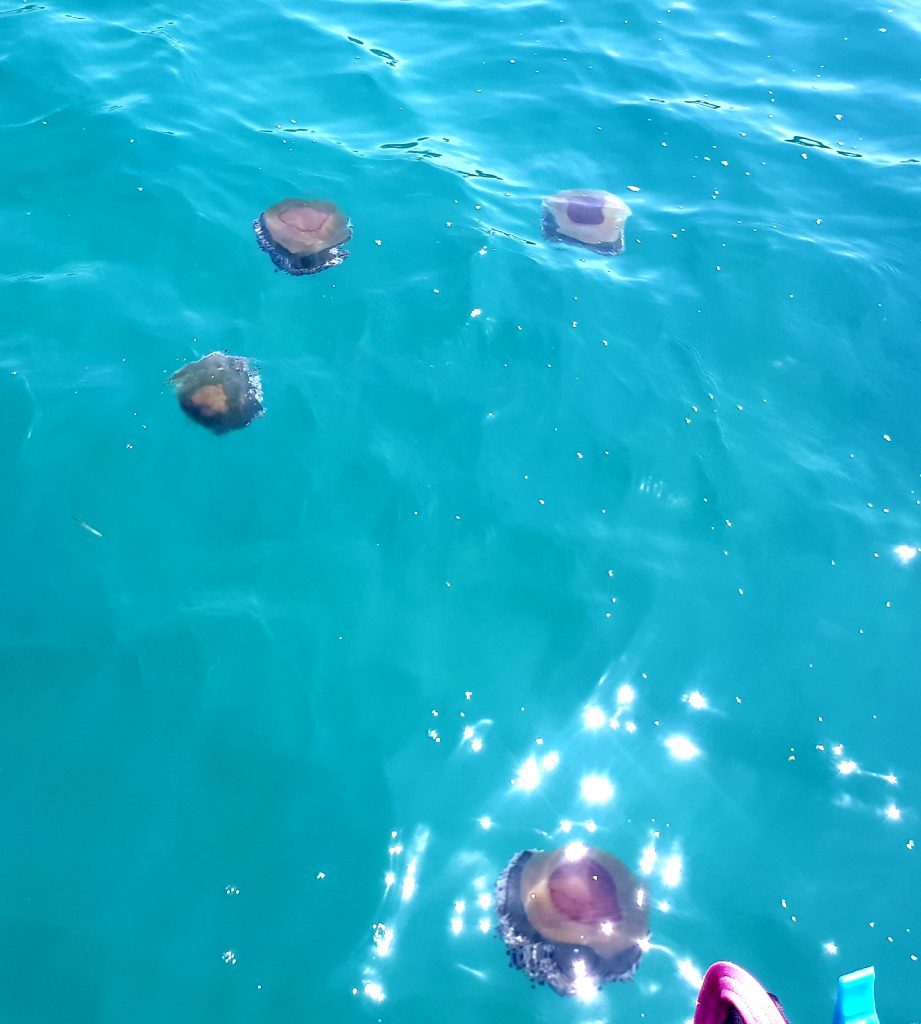 The water was milky turquouise. Just below the surface, and advancing on us,. were the dreaded purple, red and brown jellyfish, bigger than footballs. We watched out for each other while swimming. Parrot says nobody wants to climb out with one of these aliens clamped on the head, their purple tentacles burrowing into the brain through the nose and eye sockets as they suck out the information they need for world domination.

The island is in the National Marine Park of Alonnisos, Northern Sporades. Nothing but wild goats and cobwebs use the paths. There are supposed to be over 80 species of birds and 300 species of fish. We had seen the Monk seal preservation teams of scouts earlier on Alonnisos, and the shops were full of white cuddly seal pups. Sarah spotted some Eleanora Falcons, but the rare Audouin’s Gull eluded us. Saint David Attenborough stood on the northernmost tip for one of his early programmes about planet earth, pointing at the sky… “This is one of the last outposts in Europe of protected ecology “ he preached. We  have hatched a plot to put a big sign up at the entrance. “Welcome to Eco Paradise. You can either pay the monastery 5 euros in this collection box, or bag up some plastic off the beaches”. Why should it all be free?

Sarah did not believe me that the sting of the Jellyfish is not too bad. But why take a chance? There is a limit to how many lucky misses we achieved swimming amongst the monsters, so early one morning we weighed anchor and motored out of the narrow throat into the rollers. Shearwater did not bury her bows, but we did go up and down a lot. We sailed down the west side, again reefed, as the north wind chased us along the coast back to south bay. Some of the morning it was 20 knots , some periods we were becalmed. The cliffs of folded rocks were on a gigantic scale and we surfed past the twin flags of the monastery flying out straight in the stronger wind up there. The bay had too much surge of swell for another visit.

Anchoring behind the inner island with 40m of chain out we tied our stern to the rocks with the two lines of another 40m. We have done this many times without errors, taking turns at the helm. But this time I dropped the anchor too far out twice. Must memorise better how far is 80m ! That’s when we had to do the Hokey Kokey dance, in out-in out-shake it all about. Parrot mentioned the author of that song died last year. When they tried to put him in his coffin his left leg stayed out, then in then out, then all about…..

We spent days in the peace of the bay recovering from Parrot’s old jokes. 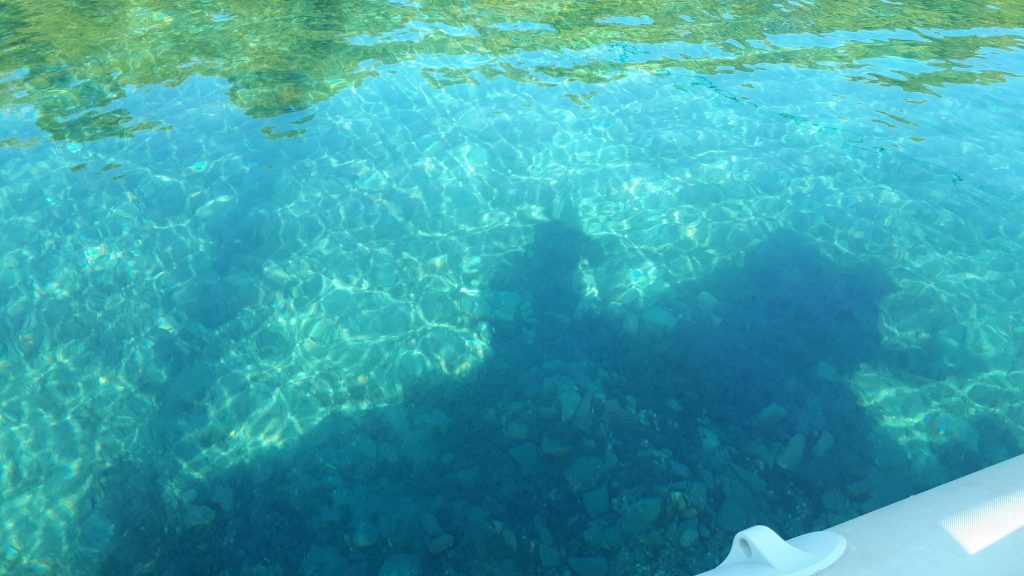