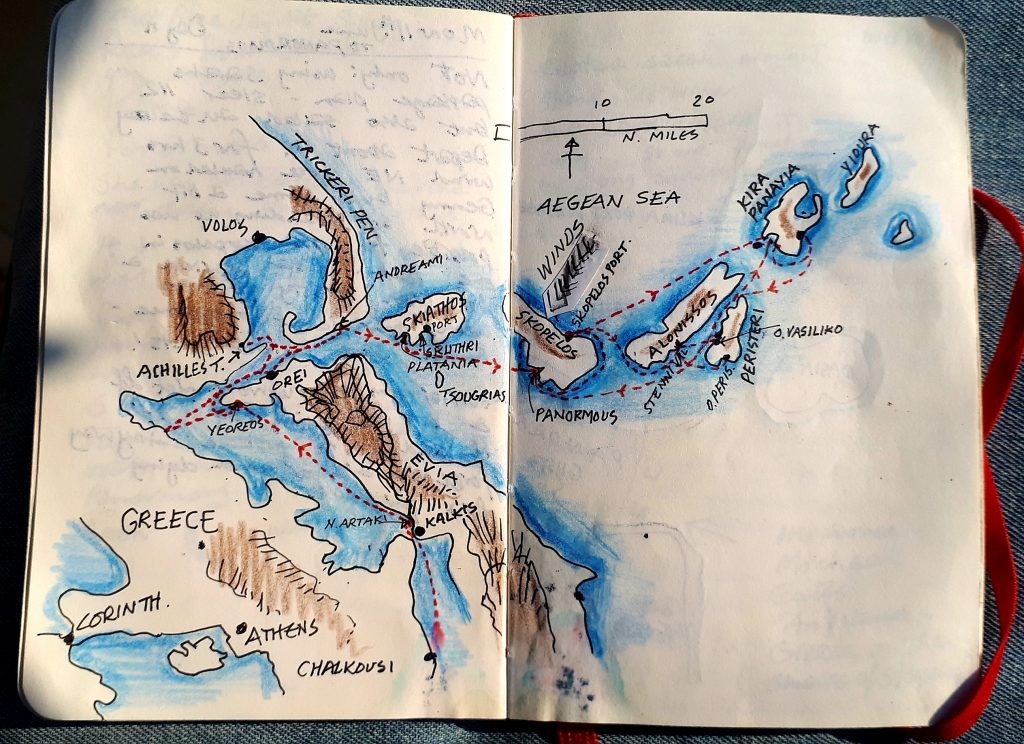 Skopelos port had all the services  we needed, such as the saucy Evelina *, the laundry lady on her motor bike. About 40 yachts were lined up stern to the quay, the harbour  dues were only about 12 euros for 3 nights. A visit from the port police in his car was made to check our papers and he wanted to see Sarah’s international Certificate of Competence. I would not get out of the boat.  I took umbrage because he just sat there hooting at us. They are after the new cruising tax receipt, which started last  month. We had met a Scottish boat who were a day overdue and had papers confiscated until they had been to a bank.

But we were all shipshape, complete with our new flag and a blue and white table cloth too in the cockpit where we always eat. All the Italian boats have table cloths. “what’s that for ? “ asked Linda.  The question foxed me… Any contributions as why it’s nice to have one would be welcome. Mine is plastic wipe clean. Our guest was very happy and good fun to have with us, she learned some winching too! She departed on one of the many ferries which always seem to be on time, which is more than I can say in that week when British airport staff were on go slow. Parrot says it’s usually the French Air traffic control surely? Sarah and I like having guests, and also equally like our own time – at a slower pace, with our goal being to stay longer in the favourite places.

From Skopelos the course for Kira Panagia was almost due north, and an easterly wind made this a good sail in one tack. It varied from 20 knots to a flat calm, and we motored a bit along the cream and ochre folded cliffs of Alonissos.  Anchoring in Pirate bay, as we call it, on the south coast of Kira Panagia, we shared the calm glassy water looking at the sunset with three Catamarans. The sound of goats and cicadas was only interrupted by the green and yellow tractor coming very slowly down to the beach. It was only the farm hand wanted a swim to cool off.

Sarah was spotting Falcons on their way overhead, and tracking the lone cormorant who was fishing, keeping his head below the clear water for a long time. On the way up this coast we had seen shearwaters skimming low over the waves, and similar looking but dumpier Corries busy in flight a little higher. Shearwaters are the best low fliers. If it was a plane like the models I flew as a young teenager, the propeller would be cutting the grass.

In this bay lie the shards of Byzantine pottery, which we have dived to examine on previous visits.       ( and put back. ) Up the hill, commanding the view of the open sea, is the ruin of a roman tower built of stone and red shards of clay, perhaps from amphora.  I searched along the cliffs of red soil where there might be more pieces washing out – but not had luck. 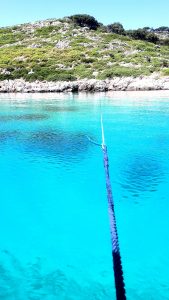 The water was a more intense blue than the Greek sky.

We moved behind the island on south bay to be out of the swell. Perfection only suffered a slight hiccup when a large 52 ft lagoon chartered catamaran anchored over our chain after asking if it was ours…. Luckily they left next day before us. We  would have shouted louder, but the crew on board was obviously shouting already at the skipper. “you have two sides of the bay to choose, why go here over that nice quiet English couple ?”  Greeks do rows big time, shouty and arm waving. Parrot thought they might be onto Brexit, but we could see where they were pointing. At the vacant sides of the bay…

The constellations at night glittered around the milky way and Sarah watched shooting stars. When the time came to leave we saw two sunrises as we encircled the island to the east. 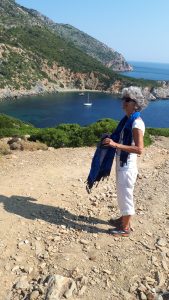 At the twin flags on the high cliff we motored to a small bay, ringed by more craggy heights of ochre and dramatic rock falls, before the wind got up. The yacht was left swinging free as we climbed the steps to the monastery but stopped on the way to see an aerial battle between a plucky Eleanora Falcon and two larger Crows. The aerobatics were stunning as diving onto the crows at high speed it began to chase them ever lower with each attack. When they finally disappeared into the shelter of the low scrubby maquis, the diving for the coup de grace was extremely fast. The bird pulled out  of a vertical trajectory at a sharp angle, wings kissing the cobwebs. A human pilot would have blacked out under the G forces. Crow was very afraid, not reappearing, and Falcon soared off, still squawking at high pitch. Parrot says that is bird speak for “They don’t like it up ‘em “  Protecting her eggs,  said Sarah, who has checked up the seasons for these things.

At the top we came to the monastery door. A long snake lifted its head at the threshold and stared me out…..we were not sure how to get in.