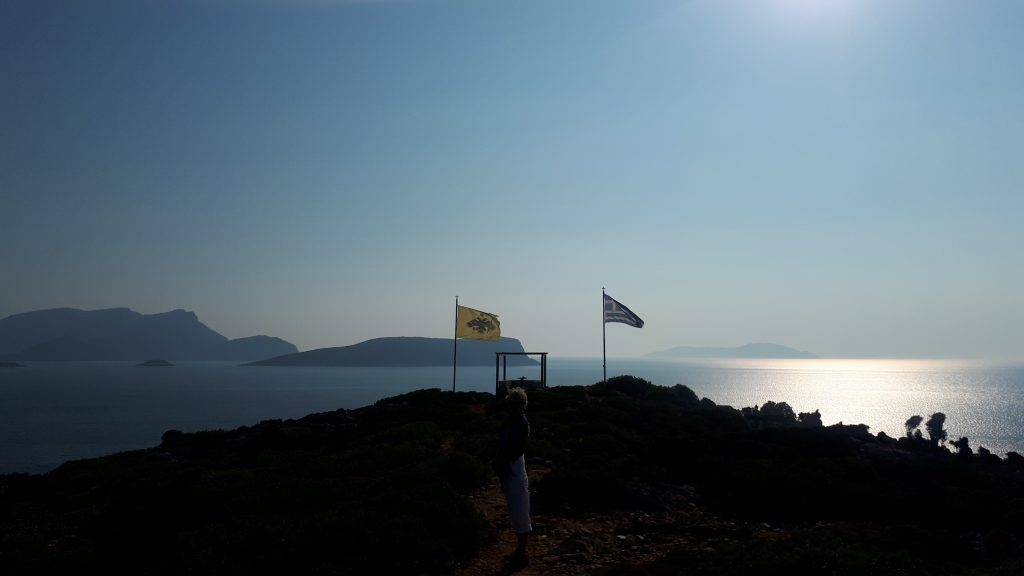 The thick planked heavy monastery door sheltered at the threshold a  snake,  about 4ft long. Lucky for Sarah that I was a boy sea scout, trained to be observant. She would have stood on it and jumped so high as to fall off the terrace. Snake lifted his large head to stare me out, not blinking his prominent eyes with large pupils. Wondering if we are good to eat? I did not blink either, as I have much practice with evil cats.  He flexed his long yellowish brown body with darker spots.  Not knowing enough about snakes to give this potential killer a sharp kick, we entered the shady courtyard through the open back door. I have a mental list of dangerous snakes, but why take the chance? Parrot says that question reminds her of the late president Reagan who remarked, “They say hard work never hurt anyone. But I figured why take the chance. “

One snake I am definitely not going near is my grandson’s boa. Its as long as his leg and getting bigger on a diet of frozen rats. When he leaves home I have a fearful vision, remembering a news story,  that it might break out of its flimsy box and go killing babies in the village .

Monk Nicodemos swept the snake away and shooed it into the fruit tree grove. “Not dangerous,”he said. “he only wants a mouse to eat “. ( True, I googled later. It was the Balkan whip snake. ).

We sat in the shady courtyard, the 8 am sun striking through the overhead vines, heavy with grapes. Overhanging clay tiled loggias shaded the main walls, held up with chestnut frames, bound at each end with metal straps where the timber starts to split. In the small church the dolphin floor tiles have been replaced with copies from Crete. 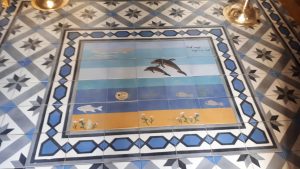 Pots of many shapes were everywhere, growing intense bougainvilleas or soft lush basil. The monastery has been restored and partly re-built since our first visit 33 years ago. It looked like a million euros worth of construction designed and built with love. The funding was partly from  mount Athos, and partly from one benefactor. 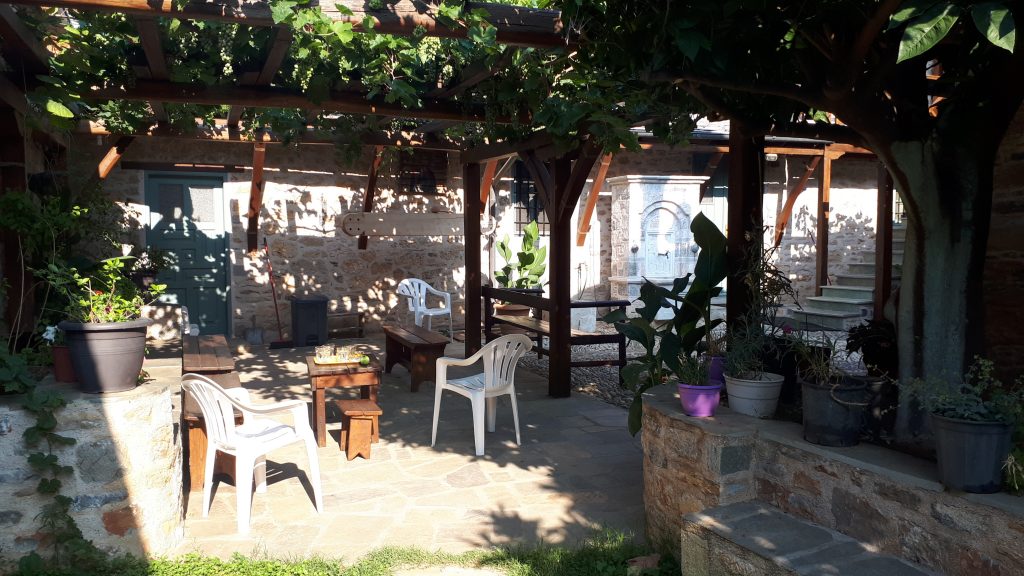 Time passed. The pleasure was to be just sitting there, taking in the plants and the details of the ikons and the cups available for the thirsty who might use the  carved white tap panel. ( the water comes from a spring, pumped up by solar power. )  It was a bit like being in a cloister, and I remembered one earlier on our voyage at Cefalu on Sicily. Giuseppe’s notes told us, “the planting scheme is plain, of box hedges. Their purpose is to avoid flowers, so that contemplation might be more pure, without distractions. “

Without any more talking, Nicodemus re-appeared with a tray of refreshment. He was in his later years, quite a rounded stout man, with a matching rounded thick black beard. His black cloak was already dusty from work as he tidied up, and his black hair was pigtailed below his black tall hat. He is the lone guardian of the island, although there are a few workers busy on tending the olives and the goats.  So, without being asked, he decided to give us a piece of loukumi dusted with coconut, ( Turkish delight, only we don’t say the T word in Greece ), cool spring water and a glass of Tsipouri ( fire water ). In some circles, say on the gin palace yachts, this latter glass at 9 am might be called a stiffener, to start the day. Getting into the spirit of everything ( pun intended ), I downed it with interest to see if the morning would perk up to become even better than the way it had started.

Next time I visit an English cathedral I will suggest to the dean that if we just sit there… a cake, spring water and a stiffener would be most welcome, without being asked for anything…

Deciding this holiday that we would let our day be controlled by the wind, this turned out to be true. It took us to the small inlet of Steni Vala on Alonissos. We only motored for half an hour to clear through a calm patch and carried on downwind at a slow 2 knots. At 6 pm the limited spaces for about 8 yachts were all taken, and yet then we got lucky. Sara pounced into a space as a yacht left, perfect entry if eggshells had been on each side, none would have been touched. 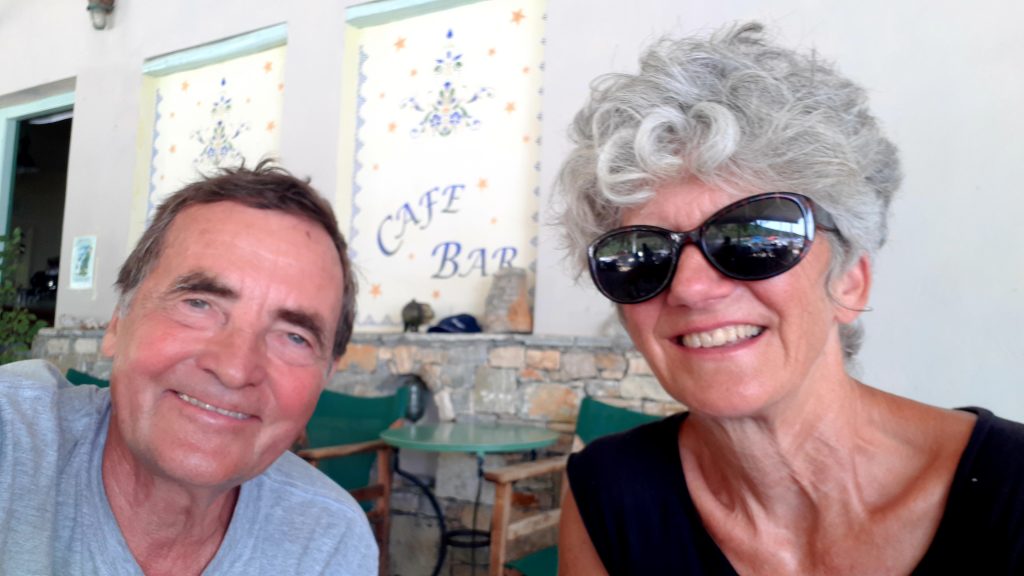 At the Icarus café the founding owner Costa welcomed us and remembered our previous visits. He is in his middle years, getting a little greyer and more stout on our cheese pie index for Greeks.  It has grown to become a quayside row of more than 8 restaurants since we first came on honeymoon 33 years earlier.   “Same wife ? “asked Costa with a smile. I showed him the book we were reading, “An Island in Greece “  He said, “Michael Carrol is still alive aged 85 in England. He only sold the house in Panormous two years ago. A charming man, a great friend of the family .”

His son, Icarus , served us lots of coffees with local, not bottled water. ( three cheers against single use plastic bottles. ) “Alonissos water is better than Skopelos water. “ he explained when I told him we were filling up with 500 litres on his hose pipe. ( free ) “We have a large well here “. He knew all about the architect Dedaelus who made the wings with which he escaped from Crete and from the revenge of King Minos. “Dedaelus invented many things, including the use of oil. “he mentioned. I thought it was a bit strange to call a son Icarus, after all, he flew too near the sun then fell to earth. When I told Icarus that we had been earlier on honeymoon before he was born he said the same thing at his dad, “What, still with the same woman. ? “

We stayed some days, sometimes eating at the family tavernas, and swimming in the clean harbour.