“I held my glass up to the light…”. There were leetle frogs. ! “ ( lost in translation, he meant tadpoles ). “The water was from the green hose pipe behind you on the quay, “ added Georgiou, on his yacht out of Nice called Red Star. Parrot reminded me of that schooldays joke,

“Shh. Don’t say that too loud. Or the other diners will want one. “

He was a friendly Greek architect, working out of Vienna, Paris and had spent some time in Cardiff. “To do the Opera House Competition, “ he explained. His fat white cat called Jonny interrupted with a fierce yowling. “Jonny ‘Alliday ?” I asked, the old crooner being the only living French pop singer we have heard of. “No, but ‘es been with me for 3 years out of the 15 I have been on this boat “ . 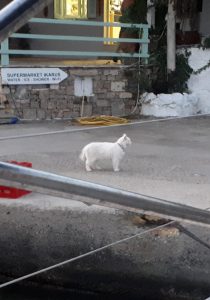 Georgiou was retirement age, with a very suntanned round face and a round long black bob haircut. He was very large, scoring maximum points in our Greek cheese pie rating. He slept much of the day under his awning and explained that Jonny did too. The yowling cat scrap continued on the quay for Jonny had met a Greek cat as he made his evening jump for living his second life as an alley cat. We saw him return at breakfast time in the mornings. In the words of the song,

“The cat came back

The very next day.

They thought he was a goner…

But he just couldn’t stay away….”

At morning coffee on the quay, admiral Jeremy from a sailing ketch Ioli made his perilous walk along the gangplank carrying his caged parrot , Jaffa. His bird does not talk, and is smaller than Shearwater Parrot, who was made in China and can say “Nihau “. (Mandarin for Hello. ) The live parrot has to be taken home to Manchester via Dublin airport to speed up customs, in a pressurised part of the cargo hold. It costs 80 pounds.

In London there has been an internet suggestion to encourage people to say “Hello” to strangers. It brought it home to me that these yachts don’t say hello till we shout first. So I shouted “Hello Australia” to the next yacht, still in Steni Vala, which led to a couple of evenings exchanging stories and drinks. We went through the types of sea cocks and what happens if they are not made of phosphor bronze. ( They sometimes simply break off and …. Boat fills ). Are Moody seacocks made of this? I think we should be told, and will go on their website.  Piracy in Indonesia is a big worry just like it is in the red sea, where yachts now have to make the passage in protected convoys. They can only go the speed of the slowest one. This month the British navy is protecting tankers after three were captured by the Iranians.  Where to hide guns came up, because various harbour police search yachts, sometimes thoroughly. ( cut a panel out of the insulation, put thinner layer on top, removable with hidden thread.)   “I have a cricket bat at the ready, “ said Australia. Parrot is not sure if you get enough room to swing that, “Taking a tip from the royal navy in the days of frigates, who used a short sword, I  suggest our rounders bat. “

The wind and swell kept us in the small port for several days. One of the nicest small, and personal, places to be waiting for less wind, with cafes and a row of yachts in front of them. “Alonnisos water is good, “ we told them, quoting Icarus at the end. No plastic bottles for our table. We all went on a couple of days from Steni Vala on an ancient Mercedes bus which belched clouds of diesel fumes and was patched up with string and tape. It reminded me that in the UK for a scrappage scheme to replace diesel cars with a subsidy, if you buy a new one, there has been very little take up. It is put about by critics of the scheme that to keep an old banger going is better ecologically. ( considering the pollution in the making of the new car.) The winding hairpin bends went over the pine clad mountains to Alonnisos old town and then to the port, less than an hour away. 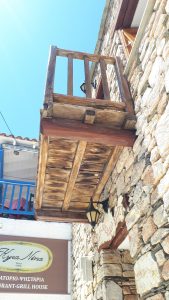 The old town had been occupied until it became uninhabitable in a great earthquake of 1978. Now it is nearly all restored, about a third being done by inward investment from Europeans. We explored the old citadel which is perched on a cliff. It was protected from the land side by high walled houses with small windows. The lanes were a mule’s width;  we saw water and building cement being delivered on side saddle.

Going into the traditional house the structure was clear in the floor and balcony. The modern balconies were not so well built and would have benefited from a conservation architect doing a simple sketch. They won’t last as long as the old ones.

To get down to the port of Patitira we walked for an hour along stone paved mule tracks. We passed olive groves, market gardens and concrete water cisterns.  The yachts were bouncing in the swell even more than in Steni Vala, but Sarah swam off the beach there. It was ice cream time for me, over which I poured an espresso. I am as ever, the support team. 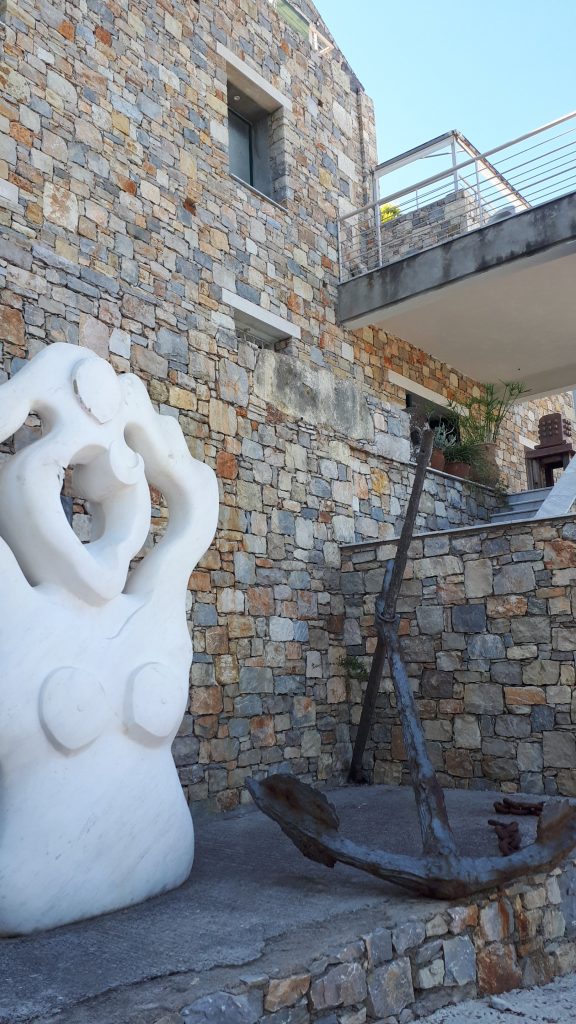 Hidden up the cliff was a three storey museum of Alonnisos. This modern building and the contents being the work of Costas, the main creator of Steni Vala. What an amazing achievement. Floors of items from the days of piracy, the peasants the resistance and from the two world wars. I had never seen a collection of goats head thorn weapons, based on the plant which punctures our bikes. Thus, for the romans and for later military equipment the tetrahedron shape of sharp spikes could be used to form a barrier to soldiers. The shape always falls with one spike upwards. The bronze or the iron version easily goes through the thickest boots.

Captain Slocum, in his book of the 1890’s “Sailing Alone Round the World”, writes about the best going away gift that he was able to use. Off Terra del Fuego, anchored, he spread tacks on the deck. While he slept he was alerted to the yowls of pain from the barefoot natives who had boarded him with bad intentions.

Back at Steni Vala we had doubled our stern ropes onto the quay. The jerking motion was tremendous as swell heaved us forward and backwards. We let our springy climbing line from stern to quay take the main strain and one nearly wore through. The CQR anchor gave nothing away.  We had a bumpy night, though less than it would have been at a bay in the full swell. By midday the blow had gone down. I asked Georgiou how did Costas build such a large new building on the modest profit from selling quayside bar drinks. “It’s a long story, “ he laughed. “I will tell you next time.”

We set out tacking into the north wind with one reef, bound for Kia Panayia amidst white horses and gusts of 24 knots. We might try out tadpole with Aperol cocktails at sunset. After all, the French eat frogs don’t they?