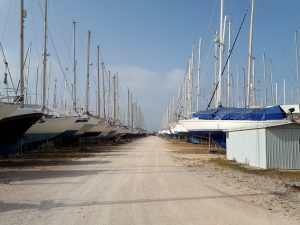 Cleopatra Marina is vast, and alongside are even more similar ones. Shearwater was here all winter, on the hard. Simon Trippier, of Sivota Yacht Services had done all the work we asked, and we slept on board, arriving on the first EasyJet flight of the season that is done in one leg.

Unlike the Italian yards the Greek yard does allow people to do their own work. All the same we had Simon do the antifouling and the hull polishing. That was a good job because there was still a lot to do…..our own deck cleaning for example with our ancient pressure washer.

So we also have new taps, a repaired exhaust elbow, new deck light. ( just 4watt led this time instead of 25 w halogen ). The chandler was open o n  Mayday, which is something we cannot say about the sailmaker who took the bank holiday off, although his receipt had promised us May 1st. We were in the water by the time he arrived the next day, and then a copy of the row I had witnessed between him and another boat last autumn occurred. He tried to ask   double the money for work that we had asked him in writing not to do, because we only wanted cleaning. At 120 euros that was still half as much again as Bristol prices. 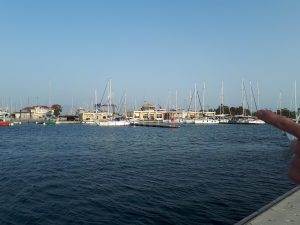 Getting used to Greek paperwork with their new regulations took the morning in Preveza town. The coast guards are hidden in an alley behind the post office. Then a trip to the Citizens office is needed with their forms for some stamping. That office is not at the Bank, it is down a side alley with no English sign. ( except in the next window saying DEKPA forms next door ). Then to the bank to queue and pay, er passport again. Finally back to customs where the reception and a coastguard filled in more copies and made a gridded set of sheets out. I have no idea what all the boxes are for, but if we miss having them stamped within a year, its necessary to do it all again and  pay the 50 euros too.

We did not really mind because the town is a nice place with friendly people and dozens of yachts stern to the quay like us. It was 5 euros a night and alternatively we anchored round the corner too. Er almost aground not having seen a red port hand buoy which was actually not red any more, and in fact shaped in a conical silhouette. We waited for parts to arrive at the chandlers. (new handles for the inflatable dinghy – sun has rotted the canvas supports for the seat). 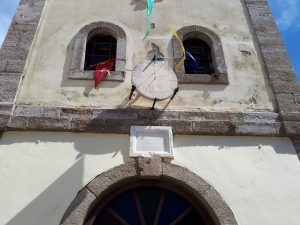 Although the water was a bit cloudy it was only a few hundred metres outwards to completely clear water at their swimming beach on the outer edge of town. Sarah braved the temperature, for she is tough at swimming having done triathlons in cold Wales. “we start swimming here in late May, “ said Costa, who owned the nearest restaurant. His parents and brother were there too, and we were surrounded by Greeks. A popular dish at the next table was calamari, piled high. Costa explained that it was frozen ( very honest ) and would we like to go in the kitchen to see all the other seafood? Cuttlefish, fresh, was a bit like squid, and went down well with the house red wine. We spent, for two of us, 25 euros.   We are awarding ourselves drinks vouchers for how many Costas we meet, as that made two already following the electrician. 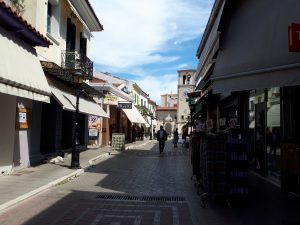 Preveza was  full of lively young teenagers on their way home from school each day, and older ones hanging round a bit in the evening. The bars were not noisy and each morning we had café freddo  and espresso, always served with water and a bite of biscuit. The back streets were mostly traffic free and busy with shops for clothes, mini markets and further out were all the shops and technical depots for building and engineering.

Getting on the quay there was popular with other yachts who were finishing their preparations like us. More fun and much cheaper than over at the marinas. The town is mostly modern greek Mediterranean building post earthquake style, two and three storey. Just 8km away is the ruined city of Nikopolis, where there is a very special memorial if some tenacity is available to find it.