Sailing eastwards  to  Ischia only took a day, starting at 8am  with a benign south westerly wind for a broad reach. The passage was 43 miles. We started with about two metres of swell behind us.  But by late afternoon the wind had strengthened  to be on the nose and we were reefed by the time we rounded the end of the island to head north, finding more sheltered sea. There were not really any marinas on the south side, so dropping our hook  5m near the citadel was in a good position,  being out of the rollers. The information about the coast says no anchoring, and anyway we knew the rule about staying more than 200m offshore. However the bay was full of Italian boats anchored, and all was well. The harbour of Ischia is charge band 6, meaning it is over 120 euros a night for us. The only non – Italian boat ( Australian ) , like us, kept all fenders out for that night time drifting around. Next day they said – “We only did it because we saw that you had done so !  “ 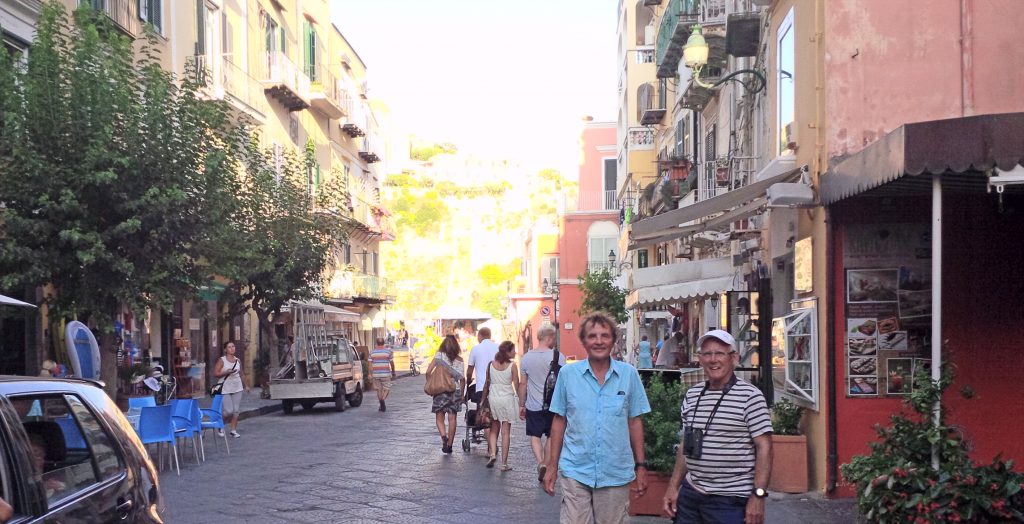 In this anchorage  we thought perhaps the depth sounder had started to play up. It jumped as we arrived in reading 8m then 3m. But this time it was right, for we had anchored over a pile of rocks.

Ischia had   dusty and run-down street streets near the citadel.  We explored them by tying our dinghy onto the the 15th century causeway and then walking along it into the port each day. 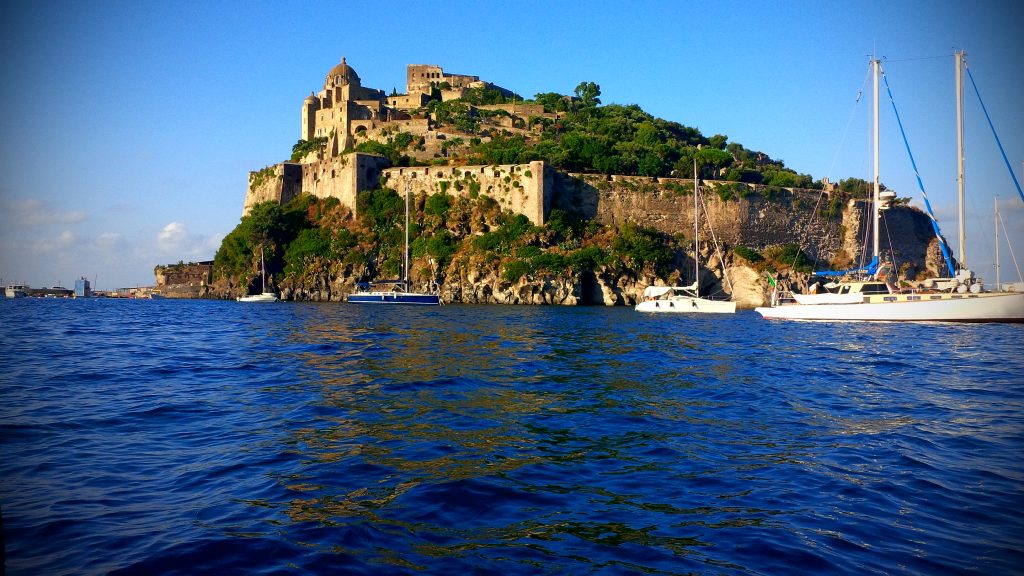 The medieval, Castello  Aragonese, is a jumble of courtyards and dormitories, halls and monastic rooms all piled on top of each other as they get nearer to the heavens.  When I was 18 I crewed on a yacht, Naseby , out of Ischia Harbour, bound for Malta. Borrowing the seagull outboard on my first day there, I climbed this cascade of brown stones, but ran out of fuel on the way back to the harbour. My first experience of Italian generosity . Remembering my experiences like that, I do give a novella by Conrad called “Youth” to young people…. The theme is optimism, tenacity and perseverance.

We became good at shopping nearby for vegetables. We got ice from the fishmonger, to assist our solar powered fridge with the warmer weather heating us up.  The swimming was like a sauna after England,  in clear water with a shallow, very rocky bottom. 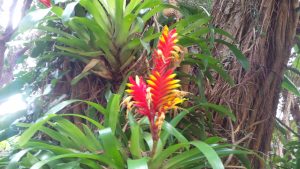 Our big adventure was to catch a number 1 bus bound for the gardens of La Mortella (The Myrtle). It was created by the English composer Sir William Walton and his Argentinian wife, Lady Susana Walton in 1949. I have never seen cascades of tree orchids growing in the open air.

At the bottom of the gardens was  a long rill under the canopies of the giant palms . The still  surface was a perfect mirror.  In a greenhouse nearby we stepped to the edge of the mammoth water lily, “Victoria Amazonia”. It was so big it seemed to have landed from another planet. Pixies could dance over its basil hued surface. We were overwhelmed by scents of humid fertility. Taking big lungfulls might have turned us into a tree orchid, our legs becoming tendrils and roots. Lady Susana had made it a mission to plant native species from her homeland. In this quarried out hillside the verdant results were  of greenery cascading  down from all the slopes. And on one of those at a reception desk was sitting a parrot, named Lory, from Indonesia. Seminar rooms, tv documentaries, and a large restaurant clung to the ledges.  We had our first real Italian  Bruschetta et Pommadoro  tomato heaven mixed with Basil leaves of cours. We liked it so much it is the most copied lunch on the boat that we do for ourselves. Drinking Ferrarelle effervescente naturelle we tried to start good habits of not guzzling wine every day. It did not last. 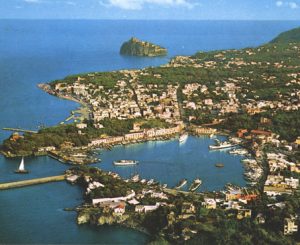 On the bus back, standing room only, we had an aerial view of the harbour. It is a circle formed from a volcano . Ferdinando II of Bourbone, recognizing a good thing, ordered the seaside wall of the crater be destroyed in 1854 in order to form this natural safe harbour. Looking down I could see the circle of yachts tied stern-to the wall.    As a teenager I found the yacht Naseby there after a long rail journey and a ferry. What a relief to find her.  On the strength of a telegram I had quit a summer job in a council architect’s office, a world of slate grey that I left behind. The luck of my youth then was to be a crew on the yacht, entering into a world of millionaires and aristocracy.  We would be skiing behind a powerful Riva speedboat, or bouncing down the lanes to beachside discos, seven new friends piled into a convertible triumph herald.  Art college nieces of my skipper the Brigadier told filthy jokes at dinner and laughed so much that their bra-less dresses lost control. The summer confirmed again to me that I was born under a lucky star. I decided that I liked art college girls, and when I returned to Liverpool University I met one, who later became my first wife.

In between the delights of that hedonistic life, I had some duties on the yacht. One was to scrub the decks every morning before the boiled egg breakfast in order to keep them as perfect as the white ensign of the Royal Yacht Squadron, under which we sailed. Yachts moored with their bows together in a circle like that all had their anchors crossed. It took a morning of heaving sometimes to get under way. Nowadays the mooring is done with lazy lines.

Walking up from the boat with Sarah along via Luigi Mazzela we came across La Cattedrale di Santa Maria Assunta. Once into the doorway we were bathed in a blaze of light of sumptuous power, like a floodlight shining out beams of faith, brighter than the sun. For inside, by contrast to this dusty street, was an interior like a jewel box of marble and bright colours. The floor was so polished that I could see the ceiling reflected in it. In the dusty ash coloured street outside I saw a man in jeans and a blue jacket striding along, but when level with the door, he twisted sideways to face it and crossed himself. He carried on walking without missing a beat. In this unremarkable noisy road, the front is a contrast to the street scene, being a sumptuous wedding cake of Baroque scrolls and pilasters.  I have found a drawing that my teenaged self did of it. How the styles of rendering change with age, once so precise and all joined up. Nowadays more ambiguous and freestyle. Perhaps it is a better way tell things if we are less precise. 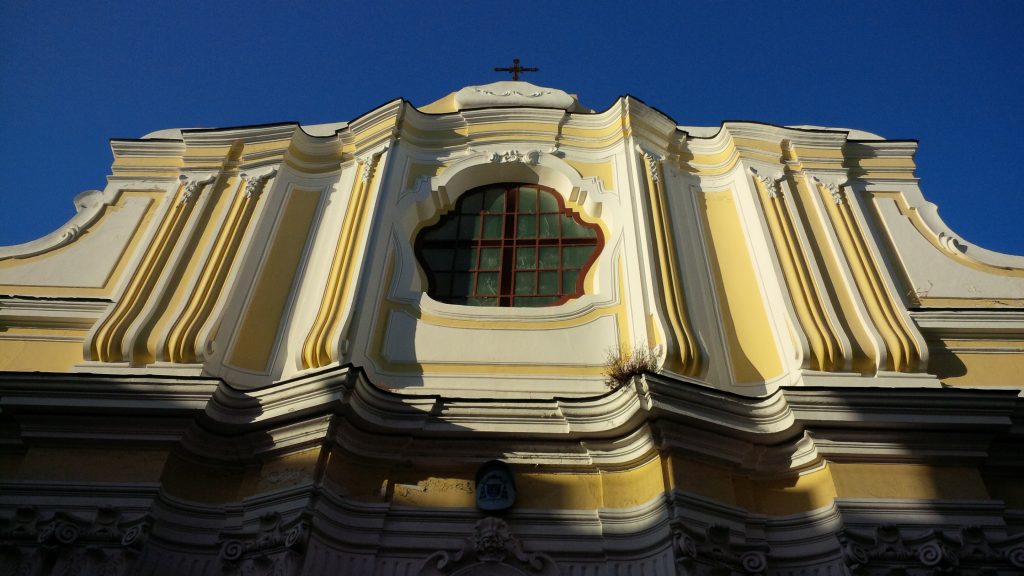 We would also stroll along to the harbour walking parallel to this road in a car free lane, and peer into another world of hotels. The Italians do churches and hotels with great style. They were low rise  modest fronts, yet they revealed sumptuous interiors. Layer after layer of framed views   led the eye into another world of wealth. Through marble columns and polished terrazzo could be seen pergolas round pools and verdant planting of palms, warm terracotta pots of abundant figs with their hand shaped drooping leaves,  intense scarlet bougainvilleas framing the view.  You could only see this if you stopped on the centre line of the open doors. Squinting into the silvery reflected light I expected to see film celebrities strolling out. Would it be a modern day Frederico Fellini.  Or perhaps the ghost of Peter Sellers from the 1960’s when he lived here. “ ere, governor,  someone’s nicked the hole out of me guitar…”  remembered from school days music lessons about the comedian Peter. “ Turn it round you fool “.

Staying there amongst about twenty anchored yachts we shopped for chunks of hard cheese near to the citadel. We were getting used to buying more than one kind of tomato. The friendly locals directed us to the fish shop where we were also given a bag of ice which helped our fridge. A few tourist shops lined the streets connecting the causeway to the main harbour, but the upper floors showed a lack of full occupation , the buildings felt like they belonged to an age of of past grandeur. Motor scooters were parked in rows of about a hundred at a time, and there were a few modern cars. Three wheeler Tuc Tucs rattled along with their 2-stroke engines.  They looked pretty old, and one of them could have been the transport I used to get to hospital at midnight as a teenager.  A spike in the deck was embedded deep in my foot. I did not realise till then that Italian hospitals have poor people’s wards separate from the rest. I was trapped in the former where a  patient died each night,  as I could not sign myself out, having left my passport on my bunk . 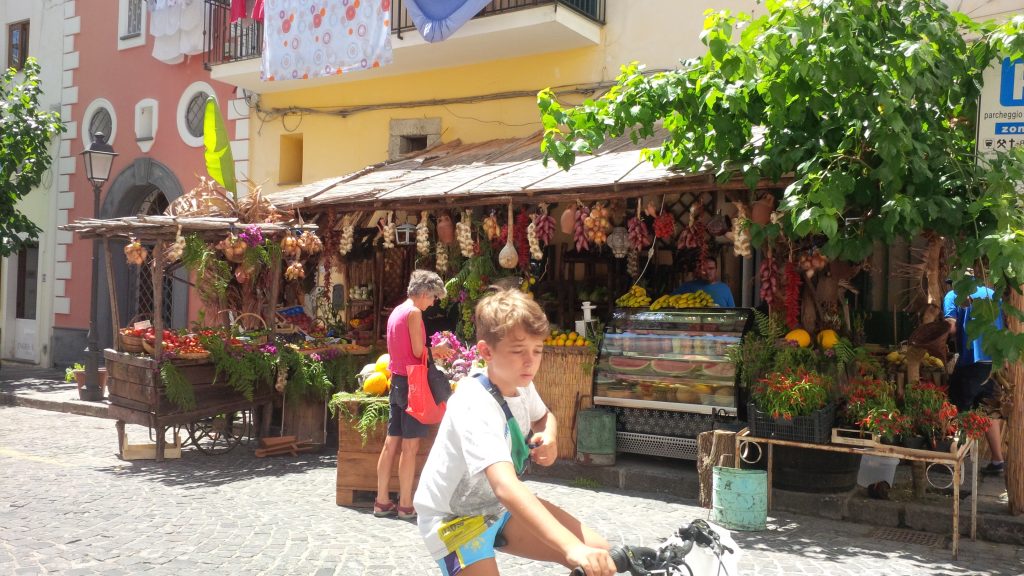 In the back streets near the Citadel we found the maritime museum. After lingering over ship models and figureheads, I found what I was looking for: some old charts. With my phone I took pictures of the next destination: Procida. The digital maps with all the depths on had run out of data a little west of Ischia. How mean is that? The chart I paid $200 for said “Mediterranean “. It did not say, by the way , when you get to Italy you need to buy next the eastern Mediterranean. I was very miffed, knowing we could not suddenly get a data card – and resolved to sort our anchoring by using old charts on my phone. After all, rocks don’t move do they? 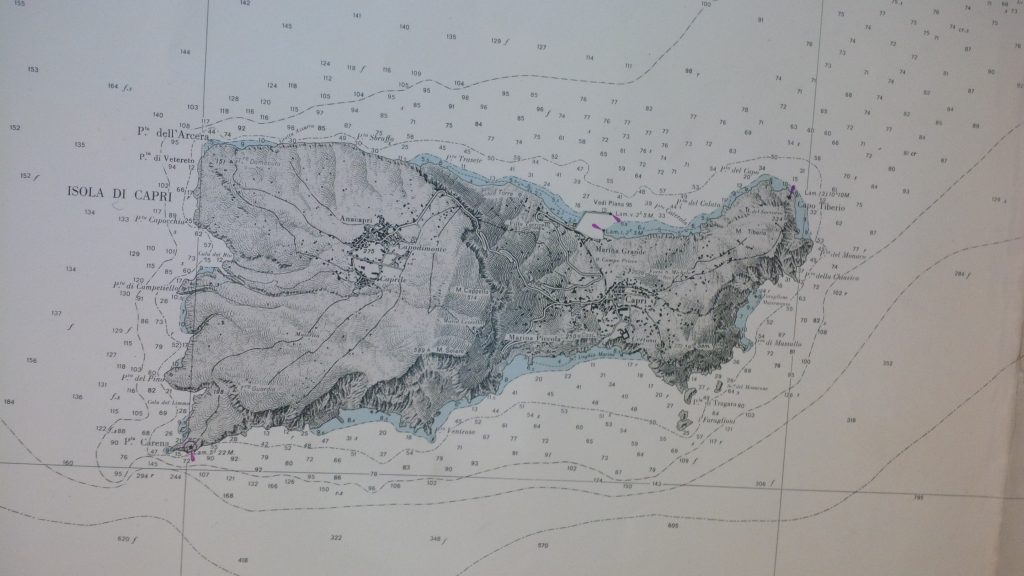