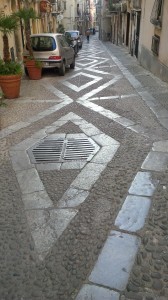 llion visitors crowd into this pretty holiday town, where the population is 14,000. Although the season is not started in April, the streets were full of Italian families on holiday. The narrow medieval streets have shiny stone pavings in diamond patterns. They all seem to lead to the clean sweeping beach which is the big attraction. It is a medieval street pattern but many times re-built since various earthquakes.

We sailed past the beach at the end of a full day motoring the 35 miles eastwards from Palermo. The pilot says it is possible to anchor near the old harbour wall there – but it looked too exposed for us. Round the corner instead is a fine sheltered bay, not very built up, and free to anchor. The small marina did not tempt us, and was not very busy. One other French yacht anchored with us, with no flag or number.

Swimming in this bay was a strange experience because it was a mixture of warm and of cold water. The bottom half of me was in warm water, the top half in icy water. There at the dusty grey shore was a small river feeding the bay. Three women were washing things in it, but apart from near them it was crystal clear. We  dived like dolphins in a new style of swimming to keep warm.

We rowed ashore past the fuel quay. Larger ferries came in and lines of coaches parked in the dusty surroundings of the harbour. The town, being mostly traffic free, was the other side of a steep climb – and those who were not headed for the beach,  arrived, like us, at the square in front of the Duomo. Founded by Roger 2nd it dates from the 12th and 13th centuries with twin towers in the Norman style. A long flight of steps forms the setting between it and the square packed with café tables. Under those steps was once a cemetary, containing, it is said, soil from Jerusalem. This had the special property of speeding up the m 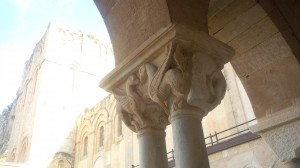 ummification of the residents.  Parrot said, “ Why would I want to know that? You are spoiling the taste of my peanuts”.

The church is much re-constructed after many earthquakes, and yet the fine mosaics shine out from the apse. Outside  through a side doorway we found a young man in grey, and very polite, sitting in the gloom. He took one euro for an entry fee to the cloisters. Delicate columns are topped with carvings of wild animals. He explained that each quarter in the centre is devoted to one biblical verse, divided by low myrtle hedges.  “In the centre is a fig tree to symbolise growth. The foliage was chosen for avoiding the distractions of a flowering plant”. … What? 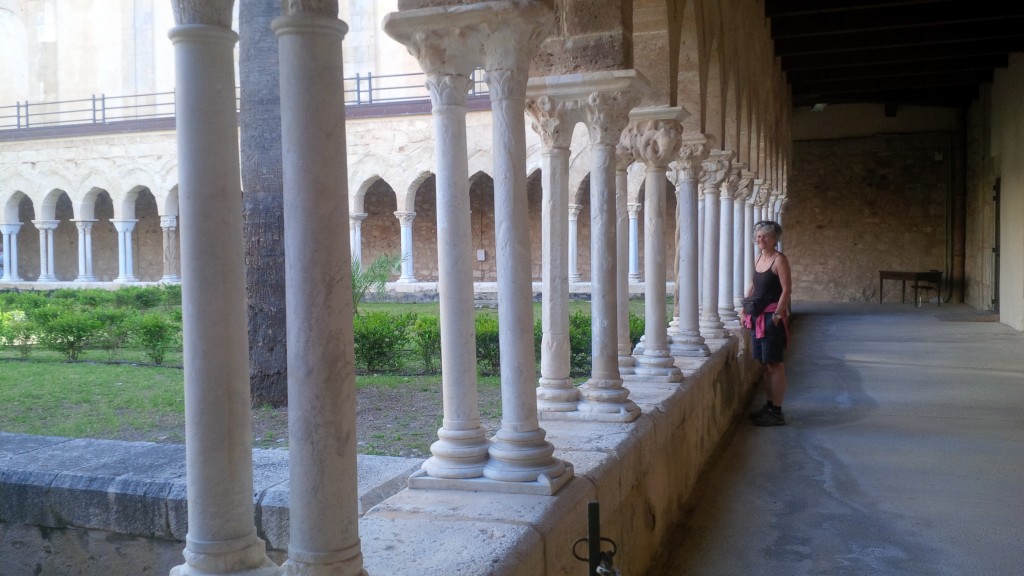