Among the 34 Italian survivors of the massacre on Cephalonia was one who swam the straits, from there to Ithaca. After the Second World War, as a captian,  he would give long toots on the Patras Brindisi ferry, in memory of his 9,000 comrades in the Alpine Brigade. 3000 of them survived the battle of 7 days, but were taken prisoners and shot on the orders of Hitler.

Of the few other survivors, Battista Alborghetti was one young man, 19 when he was sent to Greece:

A terrible massacre, that still remains in my eyes and on my mind. There are so many images about those awful days of terror: stories of war and death, written in the blood of so many young people who pursued the dream of a better Italy.”

His full account is too harrowing to print here,  and it is at:

In this summer’s news it is reported that the Greek Government is still trying to recover more reparations from Germany. Nazi Germany’s occupation of Greece saw the destruction of 80 percent of Greece’s industry, transit and transportation routes such as ports, roads, railways, and bridges were left 90 percent in ruins, and loss of civilian life is estimated at 11 percent of the population.

In 1978 a monument was placed in Argostoli by the Italian government. Before then this war crime was ignored by the Italians. Only after the release of the film “Captain Corelli’s Mandolin” in 2001, the massacre really came to public attention in Italy and now there are regularly commemorations held for the victims that are now seen as the example of the Italian Resistance during World War II.

We sailed the straits in a fair brisk wind for half a day from our corner of Ithaca to the sheltered harbour of Ay Eufemia. Shearwater did 7 knots ! The east coast of has pines, cypress and olives cloaking parts of the mountains down to the sea. White limestone and slashes of apricot coloured rocks show between the woodlands. Above them is the hazy barren mountain greys of the mountain spine down the centre of the island. This was the setting for the story and the film: “Captain Corelli’s Mandolin”, the novel by Louis de Bernieres. It is the fictional account of one of those 34 Italian soldiers who was hidden from the Germans and who survived.  It has a very sad ending or a happy ending depending which version you take. 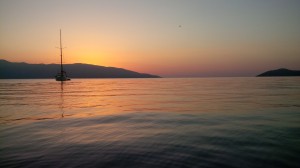 Sunrise from anchorage at Ay Eufimia

We anchored there for a few days, along with a few dozen other yachts. Boat watching became an evening pastime as the flotilla yachts came backing into the harbour quay with a strong cross wind. We turned back trying to tack up the straits one afternoon, in a strong wind from the north.  The steep short white capped waves were so lumpy they’d thump the yacht and slow it down from 5knots  to 1 knot. Instead of hammering into them, we anchored at a swimming bay with bright water, surrounded by black

goats on the white rocks.

The fuel lorry people cheerfully asked us the day after filling us up how were we doing? I asked what the penalty for spilling fuel is. “ You don’t want to know” was the reply. The harbour staff are known to be brusque, perhaps they have to be – saving berths for the flotillas. One evening after the yacht watching excitement had calmed down,  we heard the strains of an accordion.A pretty house nearby set white lit spheres on the rocks, and Chinese lanterns in the olive trees while a Greek singer played at their party. Another evening we heard a loud single “twang…..”  A large Maltese motor cruiser had caught the long anchor line of a big British sailing yacht.  Engines were revving, international shouting was loud too – and then that strong wind took control to blow the Maltese onto the quay. All was sorted by morning, as we walked along to our favourite coffee bar where the light golden sponge cake slices became rather addictive. 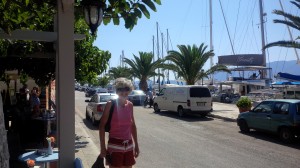 The town is mostly re-built with single and two storey apartments or shops in a scale that feels just right. The colours of ochre, cream and white give the overall effect a connection, although every building is different from its neighbour. There are a few pre- earthquake derelicts, and we found ourselves accidentally looking down into a roman mosaic floor. By the time we left we had stocked up with lamb kebabs at the delicatessen style butchers. Nectarines peaches and melons were plentiful, and the large village seems to survive on general tourism as well as on the daily trade from over 50 visiting boats.