Motoring 2 hours brought us to the shallow small mainland harbour of Mitika. With space only for 5 yachts, and being midday… it was full. So we anchored with a few other yachts in a shallow bay near the beach and walked into town.

Our first mainland visit started with a run down waterfront café – and we could see that the community is very poor. Yet the streets had a mixture of derelict plots, weed-covered, alternating with new bright 4 storey villas with layers of balconies. We followed the ice truck making deliveries along the pedestrianised main street to the only cash machine. Thankfully it was working as we needed cash to return to the islands. The town had seen better days, and was modern construction – with the only sign of civic money being spent on the road pavings of random shaped stone. Here and there a circular pattern featured.

“I like you English, ( you are not American are you), “ said the owner in the minimarket.” You are so brave.” We looked around his shelves more than half empty, and tried to find a few reasonable tomatoes. What did he mean?  “ You have done your Brexit ! “ he said – and explained how bad the Euro currency has been for Greece. “ too late for us to leave now….”

Later that day, armed with cash we returned to the islands.

Panic set in when we discovered that our holding tank was full on the way. Er, thanks to the new alarm I fitted at the beginning of this visit. Oh but surely, the red light was at fault, we thought, but no it was not.  The tank was bunged at the bottom. I made a “poo stick” to unblock it, using a length of metal with a long bolt at right angles coming out of the bottom. Rubber gloves on….. a deep breath, and as soon as I dived down into the locker….. a gurgle gurgle noise told us it worked .  As usual we did this some miles out to sea, and if it had failed had resigned ourselves to some days at the big flotilla marinas to the north, at Preveza.

With some relief we  anchored in the bay of Spartakhori. What a contrast to Mikita – for it is a hill top village with a busy tourist trade and dozens of yachts spendin 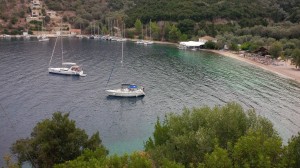 g money in the beach tavernas. They expect a yacht to eat there if they tie up, and just like in Italy, they whistle and wave visitors in. However, by rowing ashore we were able to climb up to the village and try out the taverna “Lakis”, which Sarah found on trip advisor. It was as good as was promised, with a fresh grilled sea bream covered in herbs. We stayed a while and sketched the church from their terrace as the sun went down turning the pinewoods into a softer yellow tinged backdrop.The meal was 35 euros including half of house wine. 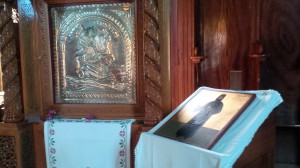 Exploring the village of zig zag lanes, the width of a donkey, we skirted the men only pub, saw families outside on their communal terraces, and shopped at a very well stocked mini market along with locals who took lots of eggs and tomatoes , like us.  The town seems to be half holiday homes, half old folk in black. We got in the church and admired the polished joinery and icons

The next day while we spent time at the beach taverna to linger over coffee along with tourists and one local character, Captain Gerry.  Gerasimos had brought in his classic single row oared boat, a copy of the Greek Pentikondorous. The boat, Odysseia,  had many classic features, including the oars and a sail. In front of the steering wheel 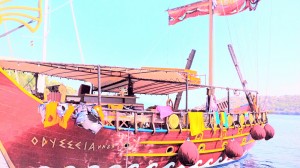 was a large espresso machine, next to the ouzo bottles. His boat disgorged a few dozen tourists on their day out and later he motored away with them, blowing his huge conch. They were off to a beach where it would be ouzo hour, followed by the “magic of zorba.”  “You mean tipsy dancing”, said parrot.