Motoring northwards to the buoyed channel at the canal we left those peaceful finger bays and realised we had finished our clear water experiences. A lot of sailing yachts were motoring through. Along the banks was the edge of the largest landfill tip I have seen. And the smell….. The water was no longer clear, though we did see egrets and a bream being caught by a fisherman.

Part of the way along were some huge dredgers. “ why are they keeping this channel 5 m deep ,” asked Parrot. “ Is this job creation?”. We saw no commercial boats coming down it.  Soon we came to the large marinas, with over a thousand boats tied up. It is not a holiday destination, more of a base for the large charter fleets.  Then we entered the straight section to queue for the floating bridge that connects the mainland to the island to the east where Sivota is located. Jamie also had to queue on his way down here, travelling in the opposite direction. The tide slowly eased us north towards the floating swing bridge, but we never got near it for a couple of hours. Like the boats ahead, we had to turn back, slowly motoring against the current. We listened to repeated radio chat from the other boats with the bridge, which we could not understand. It was a Sunday, and lots of traffic was busy crossing this route in both directions.

Although it was supposed to open on the hour, nothing happened. About twenty yachts and cruisers queued with us.  There was nowhere safe to tie up, a concrete ledge lined the canal edge which had nasty spikes below water level. When we finally got through to  the open sea, a modest wind on the beam was coming off the land, we sailed at a good speed in sunshine to  the buoyed channel approaching Preveza.  It was the last we would see for some time,. On the way we saw a heavy classic yawl hit a small open sailing yacht. The crew of the yawl were all busy, not even looking until shouting and whistling made some of them see what they had done.

At Cleopatra marina near the entrance to the inland bay we berthed for the end of our summer trip. The small yacht crew were arguing with the yawl about how much damage had been done. Finally we saw a handshake, and realised we need not to go to offer to be witnesses as we had been walking over to talk. This newish marina is very busy with two lifting out ramps, and many hundreds of yachts parked.  And too… a chandlery who ordered oil filters for our 29 year old Thorneycroft diesel, delivered next day. Torrrential rainstorms with thunder kept us in the marina café, which cheerfully served food at prices which were not bad.  It was 25 euros for our two meat meals including wine which we ate in company of other boats, picking their brains. 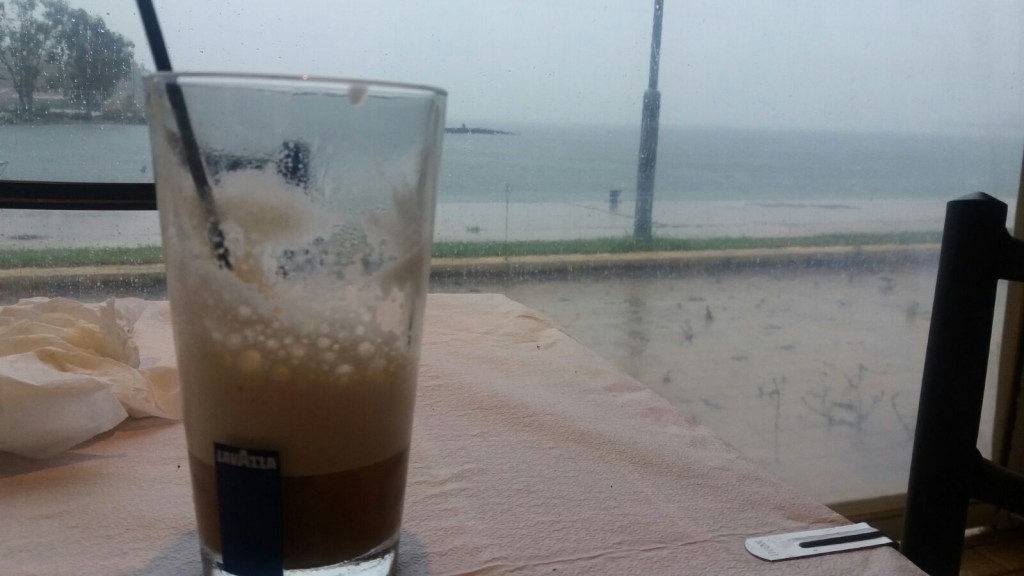 Visiting “Cleopatra” marina suggested that we could make a trip to stand just to the north on the very spot where Octavian watched the sea battle in this bay of Actium in 31 BC. The events on that day changed the tide of Roman history. The battle between the two forces of ships was in full swing, when suddenly Cleopatra and Mark Anthony rowed out to sea. She left without explanation, although the balance of success was still fairly even. But when he followed, all was lost, for there was no more leadership. Octavian later founded the new city here, and formed a memorial base where he had stood as he watched. It is possible to stand where he did this at his war camp, two thousand years ago, amongst the ruins of the city he later enlarged here, Nicopolis.     The end of the story for the vanquished unfolded later in Egypt.   Mark Anthony fell on his sword, and Cleopatra chose death with her poisonous snake, the Asp.