s of north east Greece round the bottom of the Peloponnese and up to Kalamata, where Shearwater is now in the port yard for the winter. 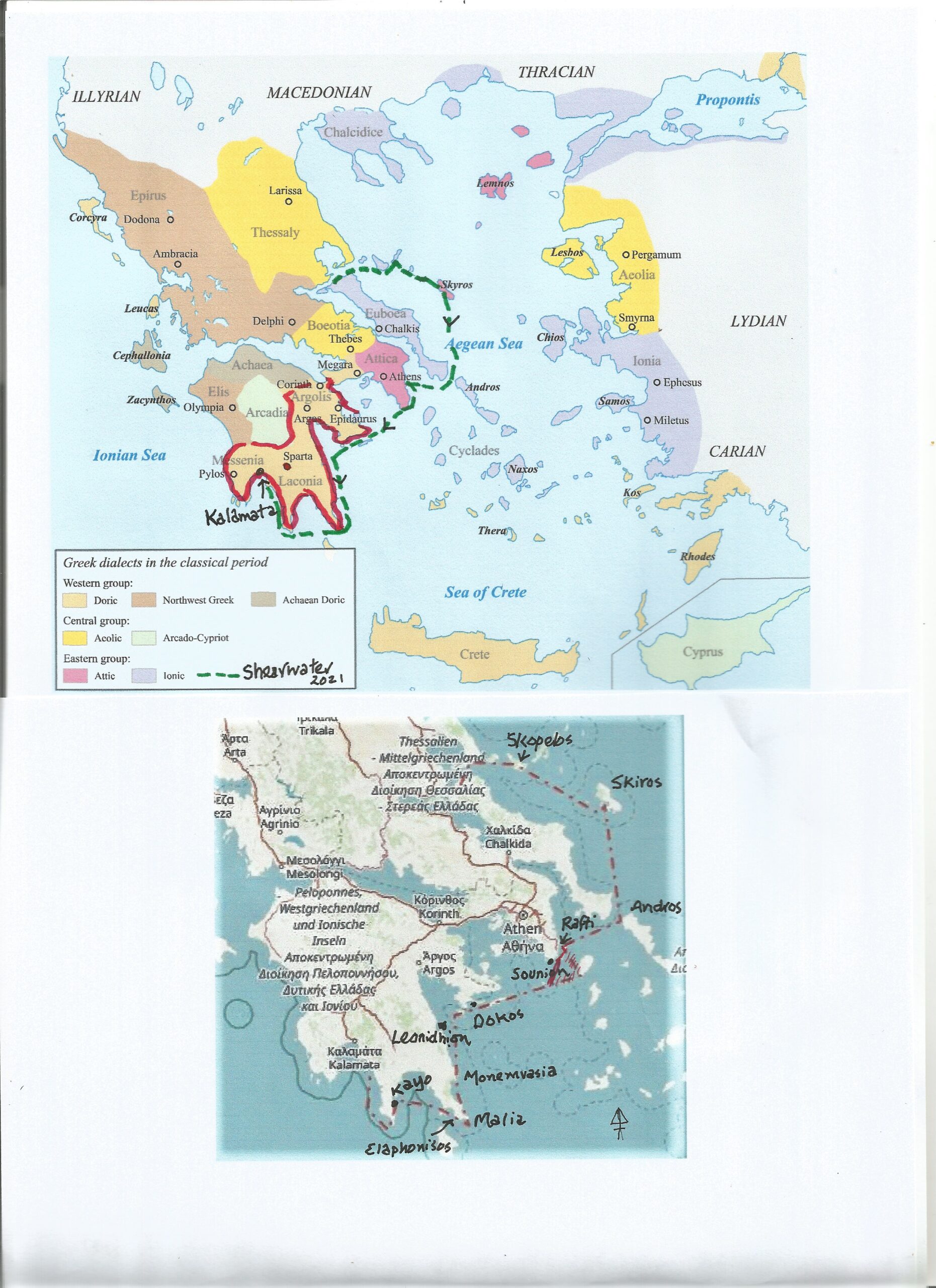 It has been the second summer of COVID causing everyone travel problems, and we took the right tests to allow us to fly from Bristol to Athens in mid 2021 as soon as it was allowed. Still with masks on, we caught the bus to north Euboea, taking nearly four hours including a ferry trip. That is where Shearwater had been in the Dimstef yard at the port of Orei.  Under  the warm sun of July, no masks were needed for enjoying food and 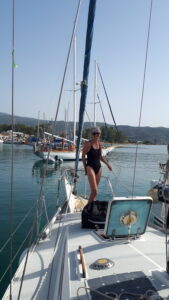 wine in Greek outdoor society….though people wore them indoors. The boatyard had given the hull its annual polish, and then we got her ready. There was less Greek paperwork this year. The yard and the harbourmaster sorted out thecruising tax at the post office.

This year we took no guests because of COVID. Sailing with Sarah since we were married and knowing our boat well after owning her for twenty years we were not nervous about being on our own. As this is our passion we tend to sail harder, faster and longer by ourselves.  But then again, yes, we had a bit of anxiety because of the higher winds and seas that we knew we would meet. Sailing is exhilarating and we love to soak up the great beauty of being free to go 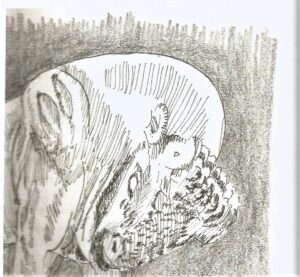 …or wait. Our travels include exploring ruins and legends by car, bus, bicycles and quad bike.

They say that there is more history buried in Greece than in any other country – and it started on this voyage with the mighty charging Bull of Orei. At nearly five tons this furious sculpture is the largest single block of sculpture in Greece and it was found nearby on the beach.  The tiny museum near the glass box for the bull has a minder, Costas, who told me his theory about why there is a bull, for there are no other Greek sculptures of bulls from Classical times. “After the defeat of the Persians the bull might have been set up to scare them away if they ever returned, along the Straits of Skiathos,” he said.

I drew the bull to show the rippling angry muscles. With him in mind, still guarding the passage, we sailed east, beating i 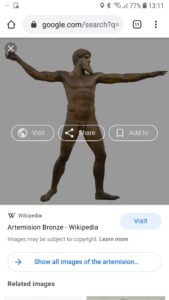 the wind. As always we were hoping to make good progress before it would increase in the afternoon, building   waves into white topped rollers against us. Behind us the sea between Euboia and the mainland used to break on the beach where the Persian invaders first landed – and the advancing hordes then massed at the hot gates. “thermo-pylae.” On our starboard we cleared the shallows of Cape Artemesia where the astonishing Atemesian bronze was recovered from a Roman wreck. Larger than life and full of purpose this Greek might be Zeus or Poseidon – they don’t know.

Just to port near the entrance of the gulf of Volos is Achilles tower. His mother, the Nereid goddess Thetis, dipped him in the Stix to give him protection at the Trojan War, but held onto his ankle. We have been to see her temple at the British Museum, it’s on our right just before the Elgin Marbles. On another cruise years ago in Turkey we found the base looking over the sea by the ancient ruins of Xanthos.

So there was lots to think about as well as getting Shearwater upwind, to begin our voyage. But a big tragedy was happening which we watched with awe as we anchored for the night looking back at Euboia. We saw the sky glow red over the forests where the wind drove the intense forest fires southwards. A wall of firefighters tried to help, and two water aeroplanes dumped their loads. They seemed so puny compared with the catastrophe which unfolded. Villages were lost and thousands of people evacuated from beaches into fishing boats. For many families this tragedy means that all is lost. Greece has good 4g phone signals and this terrible event was played out on the news.

The green Sporades islands are scattered in the sea like a string of pebbles. We bypassed Skiathos because it is so busy and difficult to get a berth. We made a fast reach to Panormos on Skopelos. We often do this on just the big genoa, which can power us along at 7 knots. It is our favourite anchorage being magically calm when there are white tops outside. When the wind goes round to the north we double our ropes from midships to the pinewood shore. 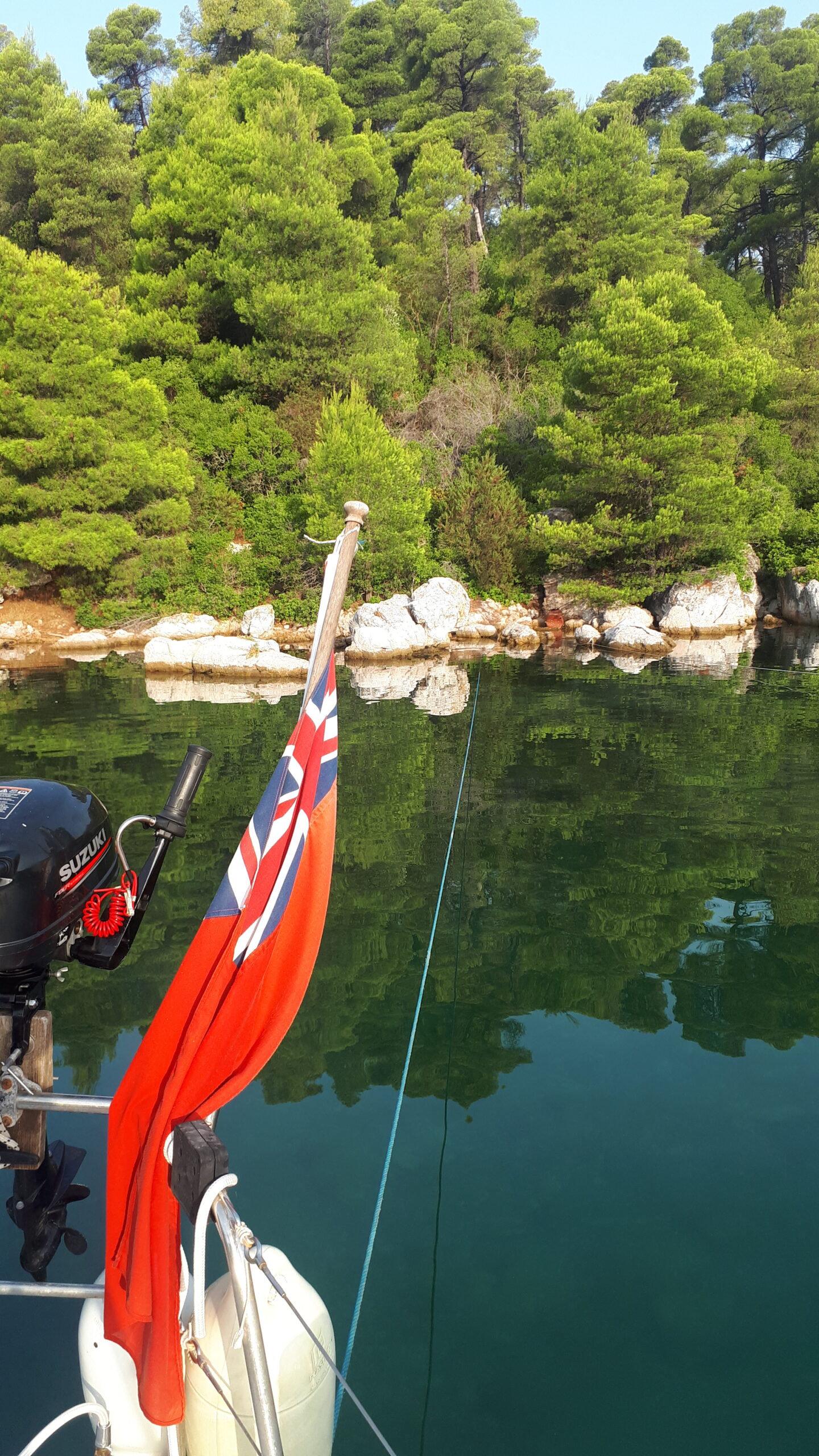 In these forests we unsuccessfully searched for a lost temple which should have been facing us on the shore. It is marked on the maps, and I could only find one white stone tooled step.   I had written to Michael Carrol who built a house there to ask where he hid a column from it which is described in his book, but found out this summer from the new owner that he died last year. Another unanswered question to Michael was about an early Christian Bishop Rhiginos who slayed a dragon near there. He did it by chanting long prayers and holding our his cross. The beast backed down to a ravine and perished, the site is called Dragonistos. It was still there on the chart as we sailed along the island for Skopelos Port. This turned out to be a true story. 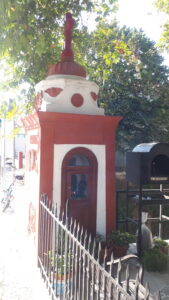 I found his shrine on the island at the old river crossing by Skopelos port in which a candle is lit daily by an old lady to whom I chatted. He is remembered for being beheaded at the bridge by the Romans in the 3rd century AD. So the dragon was a metaphor for the roman persecution of Christians….just before the time of the Emperor Constantine’s conversion.

We could have enjoyed a week in the port again this year where we tie up stern to the long quay. Saucy Evelina took our washing on her motor bike. “How can you tie up so near to other yachts, “she laughed. “ Don’t you hear them on board making love in the night?”

The town has over 50 churches, some no larger than a living room. I sketched the prettiest view from the harbour, and began to lose count of them. The streets are a warren in three dimensions. An example is the doctor’s house museum, it overlaps other rooms, and has been kept full of furnishings from generations ago. There is room for over 40 yachts and the tap water is good for our drinking water tank. We use 70 litres in a tank fitted into a wardrobe. We partially filled the main tanks which we have increased by 400 litres above the Moody’s basic 200 as we then expected to be mainly downwind sailing. 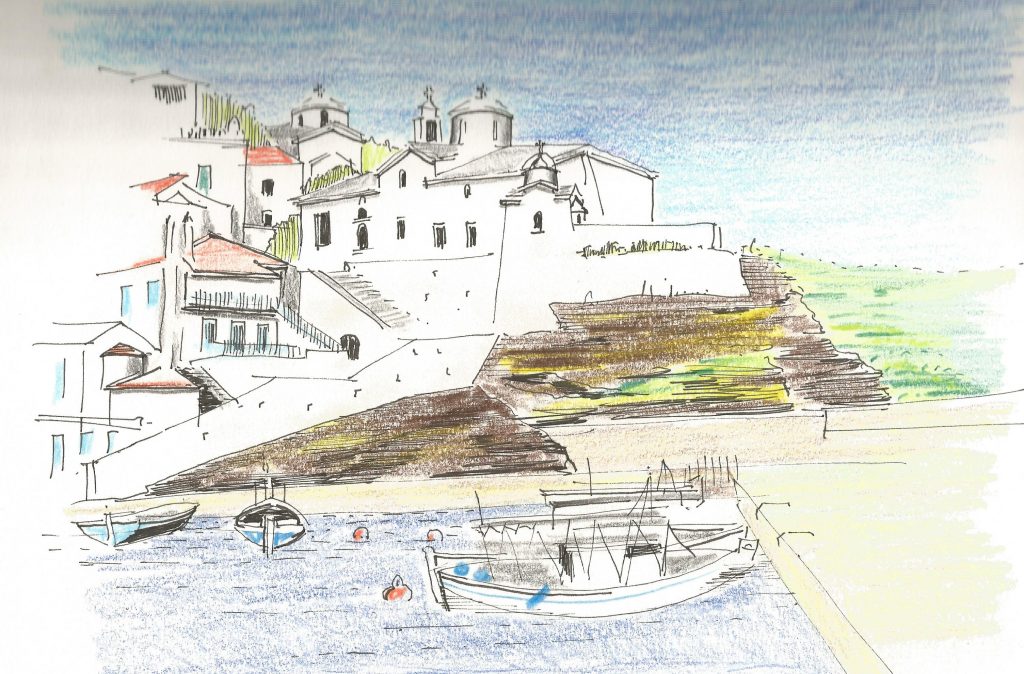 Leaving Skopelos we sailed south on a clear day with not quite enough wind at first, heading for the island of Skiros