The marina Cleopatra is modern with a  laundry and some workshops. We explored the site a little in the heavy rain, and were very busy packing ready for the lift out at 9.00 am. However, a banging on the cabin speeded us up at 8am. There was great anger with the larger yacht that had been booked in, so we were suddenly to take their place, although they came along too late. On each side of us were friendly English couples with their boats of a similar size to ourselves. Lost in translation was a piece of information about the sail services. “Oh yes, we have been coming here for years, and our sails are with them now, “ said  Mike from Emmaleen. Strange then, that I happened to leave our sails for winter laundry as he was experiencing a Greek row about the charges to him. A bill he had expected for a small repair had grown to hundreds of Euros. When I protested at the prices myself, being nearly double those of Bristol I did not get a reduction.

Perhaps the Greeks deserve some money after being treated so badly by the banks. This august yet another tranche of Eurozone loans brought the staggering total of bail-out money to 320 billion euros. The papers describe even less people giving receipts , or staying in the vat system now that it has increased. The tradition of non co-operation with authority must be in the Greek DNA. Legends of greek 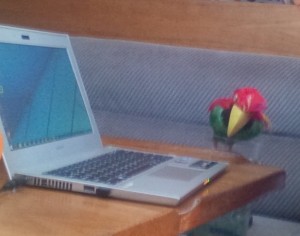 heroism since Odysseus have fostered the notion that it is good to be crafty and deceitful. Parrot asks “ what have the Greeks actually done since classical times? Have they made anything?.” Its not surprising that when the country  was later over-run by other civilisations. The Romans, the Byzantines, and the Ottomans all extracted taxes which it was smart to evade…. Perhaps nothing much changes. Parrot continues, “ last year in Athens a repair team got a shock when they entered the bottom of a lift shaft. It was knee deep in a heap of  envelopes. These are the carriers of the  bribes to doctors who then dispensed with the telltale fakelakia.”  It has to be said that the professional classes are the ones most likely to cheat on their taxes,  And….. said parrot, “A BBC team got drummed out of Athens last year when their photographic drone recorded the large number of swimming pools which the owners had failed to declare on their tax return. There have been some imaginative attempts to widen the collection pool. Helicopters have been hovering over expensive suburbs in northern Athens in the search for swimming pools in the homes of professional people who claim they are living on only €35,000-€43,000 a year.

Thousands have been identified but tax records show only 300 have been declared. The swimming pool fraternity are also responding by using nets to cover the pools to avoid detection. 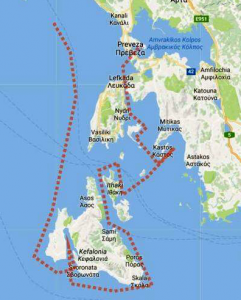 But in the holiday coasts, the papers say, the economy has made a slight recovery of one percent,       ( which is more than that of France this year). Greece has lost over half a million people in recent years out of a population of 11 million.  People work hard and smile and we don’t really mind if they relieve us of a bit more cash than at home.  Thinking about our time in the Ionians…. It has been a contrast to our sailing on  previous voyages. Waking up each morning in a placid bay, we were able to decide to go or to not go.  To the next bay? Or Not.

Small habits became pleasurable routines that take too long in everyday life. Most mornings, I made pancakes with flour and water, very thin, two at a time. Four of these were just right to go with Sarah’s chopped fruit: apricot, peaches and banana. Sometimes with strawberries too. Then there would be swimming and walking.  Then again there would be emails from work and the occasional phone call. On this Ionian trip it was the new experience of not having to go anywhere. “Perhaps that is how the placid millpond of retirement life would feel ? “ offers parrot. We don’t have retirement plans yet. These trips are an adventure that we promised to ourselves before anything happens to our health…No deadline to return a chartered yacht, no beating back against the wind along the English coast.  Jamie told us that after his delivery trip to bring our yacht here from Italy, he began to get bored just to be seeing similar looking bays. The Ionians are well known for being reasonably safe from unexpected storms. Between the larger groups of islands and the mainland has been called “the inland sea.” We have not forgotten about the bigger waves off the west coast of Cephalonia, or the short steep seas thrown up in the straits near Ithaca. But most days, in a sunny blue haze, it has been possible to just go with the winds. When we return in May we will hope to sail eastwards through the Corinth canal. And so until then our work for Shearwater is confined to planning and organising the engineers who are booked to do the winter’s work.