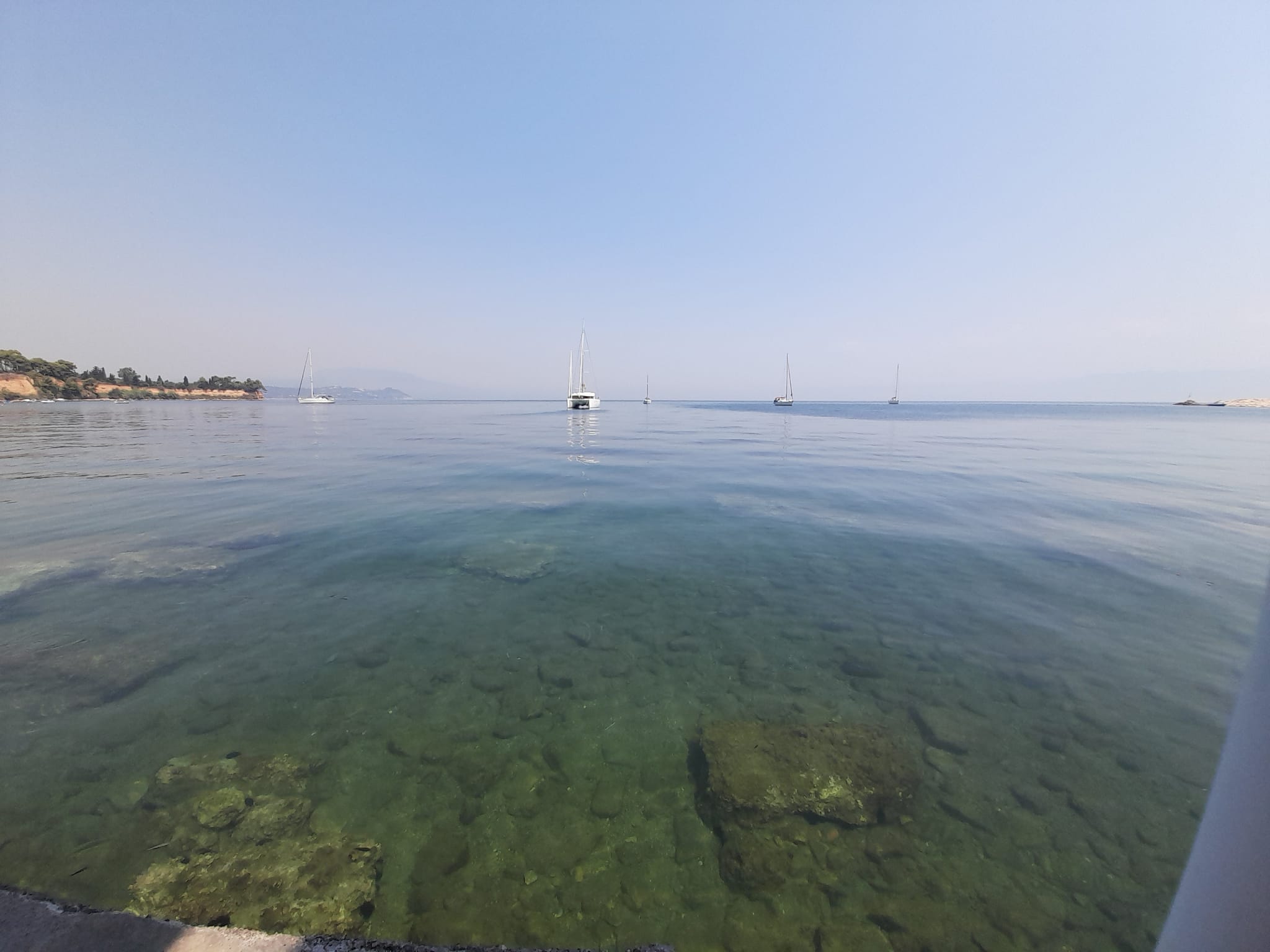 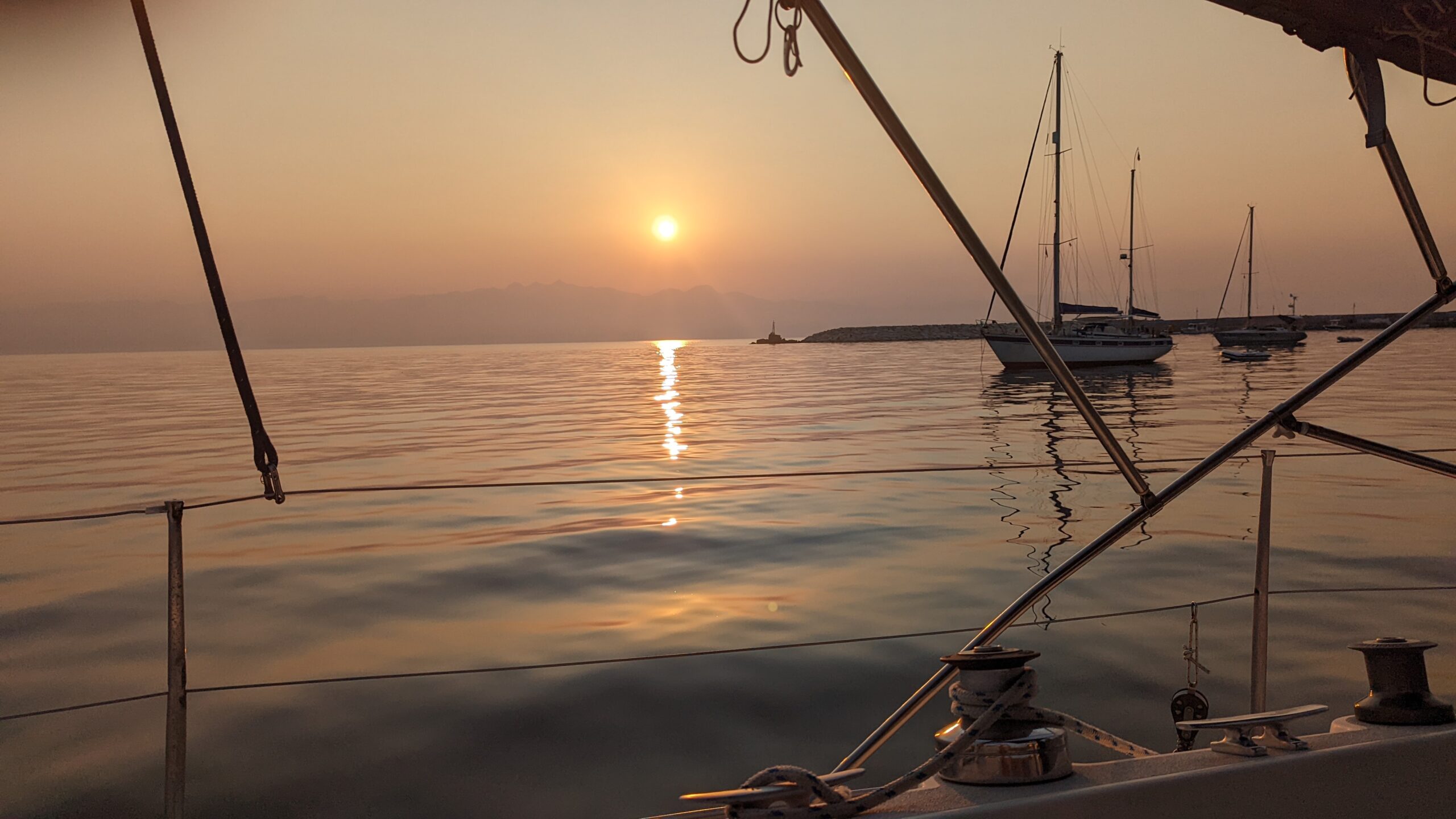 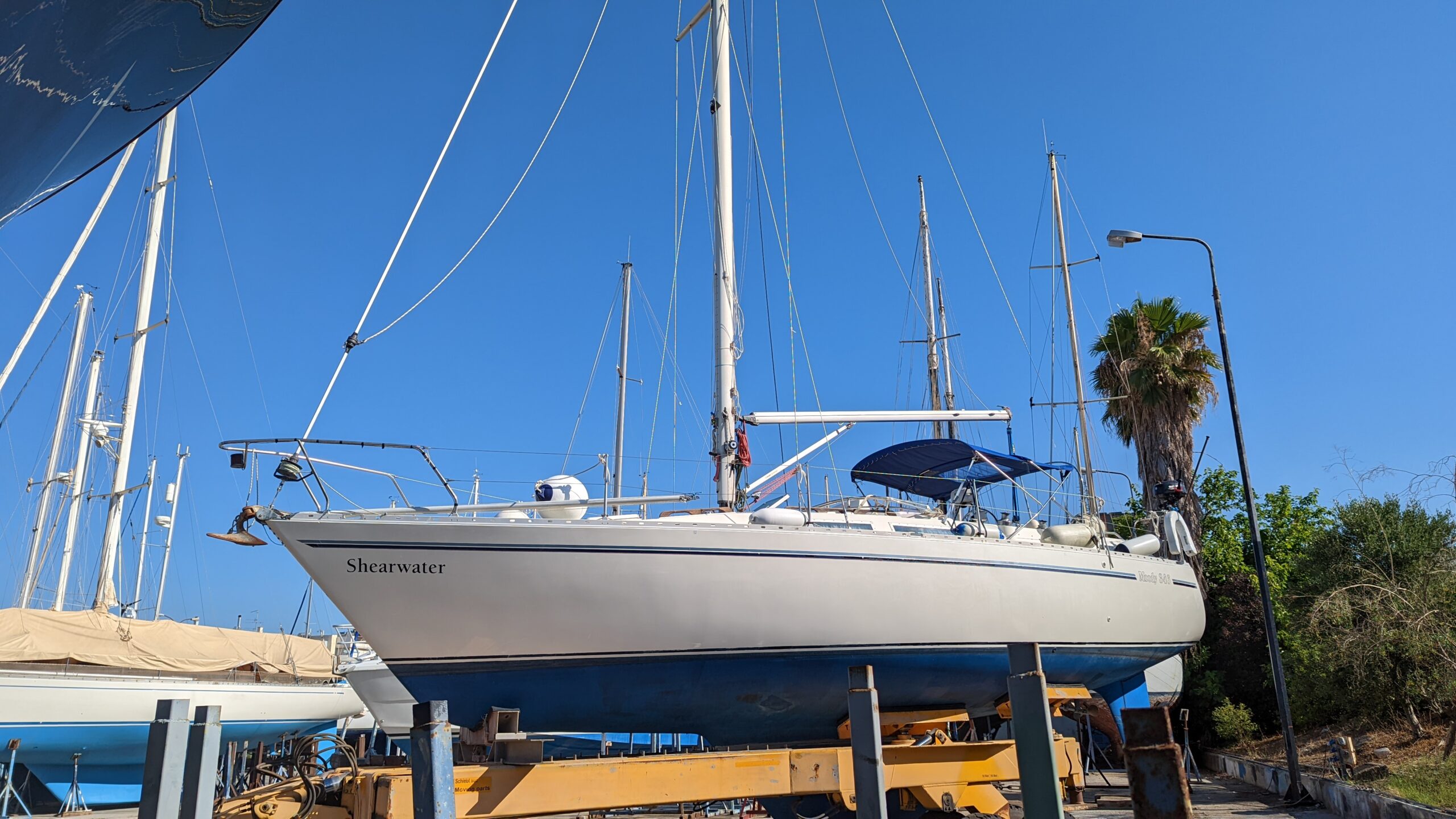 In summer each year our dream comes true when we have time to sail, anchor, and just stay awhile in lovely places. We still think that the best bays of our Mediterranean voyages are those of the Sporades. The gates of the wind: as they are called: Anemopilae.  To the west along the straits of Skiathos lies the site of the Hot Gates: Thermopilae. There the Spartan 300 made their last stand in 480 bc

Kalamata is the centre of the trade in the best large dark olives in Greece, a city of about 60,000. This yard is concreted and the boat  was surprisingly clean when we were lifted in, as opposed to the dusty gravel yards of previous winters. All things for boats can be got or ordered although getting our replacement solar panels through customs was delayed by DHL. The paperwork was correct but questions were repeatedly asked for in emails. Now they are on, a great 200 watt deck pair – but its no point in asking how to upcycle the valuable mineral materials of the old ones in Greece. There is a huge rubbish problem nationally and although I offered to take old panels back to Photonics in the uk …answer was there none.

Good luck to Dame Ellen McArthur and her charity which tries to make suppliers complete a circular economy. Lets start with plastic drinks bottles. The Greek government banned their use last summer – and I am pleased to  say all the tables we see this year have a glass of cold water offered, not a bottle.  We have drunk Greek tap water for years and fill our 70 litre tank we have fitted in a wardrobe. Island water is often from springs and only once at Skiathos port did we dislike the local salty taste – but they are drilling a new supply. We keep our daily water in the fridge of course, powered by the solar panels.

Getting here was no problems with EasyJet from Gatwick and no, the pilots did not have to help with hold luggage. We felt sorry for all those delays we have seen in the early summer caused by mountains of baggage. We breezed into Athens on time. It is impossible to catch the metro late and we changed to bus. But it is impossible to wheel a bag between the two bus stations – not a wheelchair user have we seen on the pavements, which have very high kerbs.

Sailing round Sparta we look up the legends of the classical periods. By car or by bus we have explored inland.  Car hire is very cheap and informal in these port towns. The heat this summer of 2022 here has been on a red warning, but not as high as in the UK. We arrive at sites of ancient cities soon after sunrise so as not to be sizzled in a frying pan. The best has been Messene, once the prime city of this region and for a while it was Spartan. Rows of columns are standing and the theatre is almost perfect. Water troughs fed the baths and over 100 statues surrounded the centre. Parrot says, “ why can’t we have this quality of life?” The answer my little friend is that we don’t use slaves any more….

Every morning we are on “PredictWind” as we plan the sailing around what we see on line. Last August we ran for shelter when a Meltemi arrived and blew at 30 knots gusting 45 for 3 days. We don’t like harbours in a big wind. Give us a shallow east facing bay and we lay out 60m of chain. Our old CQR anchor was good that time, though on rocky bottoms we have dragged and been up all night with anchor watch and the engine running.

We have sailed from the Aegean to the Ionian on this voyage and we loved some of the stops on the way. Anchored at Cape Sounion we climbed up to the temple of Poseidon for watching the sun setting over the Peloponnese where we are now.

Cape Malia took a bit of planning in order to round it in between strong winds from the north. Just when the sea seemed calmer when we rounded it to sail west into the Ionan sea the katabatic gusts down the cliffs were furious. Sailing “the gates of the wind” ( as they say in Greece), between the Sporades these past few years has made us cautious about how much sail to have up.  We often put one reef in. Rounding Cape Malia we had two reefs. Parrot points out, “Yachts sail better when more upright, and that’s how we won a regatta in …..” I have put the cover on her cage.

Writing these notes in a lovely bay surrounded by woodlands of poplar, fruit, olives and upright pines  I am reminded of a Spartan test on boys when asked to give a concise reply. It is called a laconic speech, and that is where we are now, Laconia.