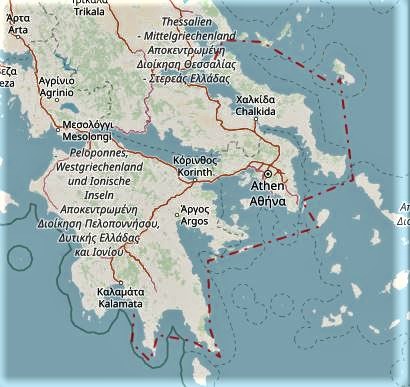 It has been the second summer of COVID travel problems, and we took the right tests to allow us to fly from Bristol to Athens. Still with masks on we caught the bus to north  Eboia, nearly four hours including a ferry trip, where Shearwater awaited us at the port of Orei.  In the warm sun of July, no masks were needed for outdoor society….though people were good at wearing them indoors. The boatyard had given the hull its  annual polish, and then we  got ready for our 400 mile voyage round the bottom of the Peloponnese. Sailing with Sarah since we were married and knowing our boat well after owning her for twenty years we were not very nervous – but then again, yes just a bit because of the expected higher winds and seas.  Anchored across the straits the first few nights we saw the sky glow red over the forests where the wind drove the intense flames southwards. Villages were lost and thousands of people actuateded from beaches into fishing boats. For many families this tragedy means that all is lost.

A couple of weeks into the voyage a meltemi wind arrived. Knowing it would last for days we sailed quickly into the large east facing bay on the west mainland called Porto Rafti.  As we dropped our sails while  passing the tiny island at the entrance we saw the seated roman statue of “the tailor”. 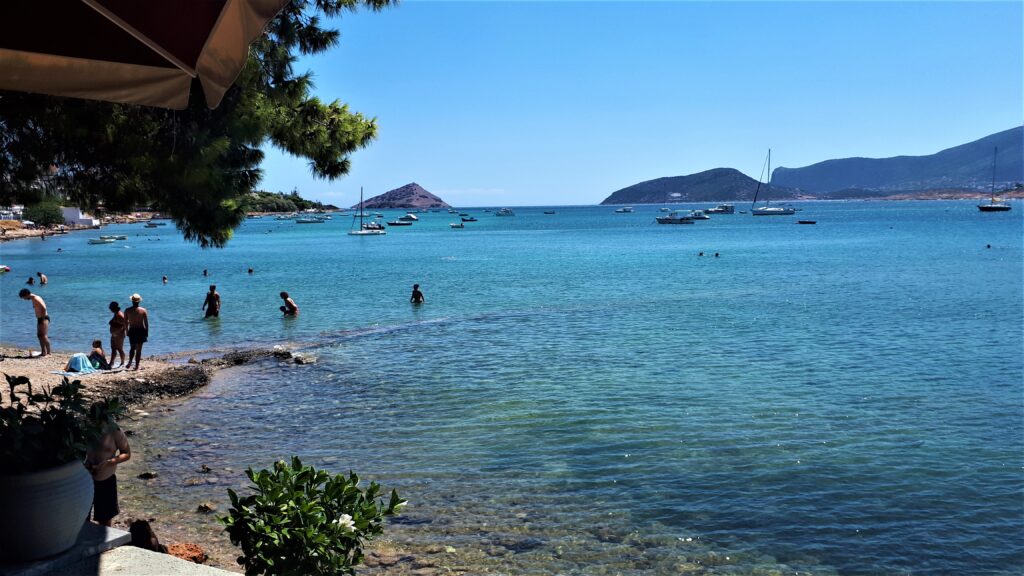 This large bay is named after her. Before sunset the wind increased to 30 knots gusting over 40, which is gale force 7. The howling noise made it impossible to hear speech, and the anchor chain went taut. We had out ten times the depth and we stayed up taking turns on anchor watch ….she held in the lovely muddy bottom and did not move. In the night there were torches flashing as all the other yachts nearby had to motor around to re-anchor. Porto Rafti had contemporary coffee bars and fish restaurants on the north side, from where the wind blew. So it was calm and placid for eating. swimming and drinking.  The water came in chilled jugs, not the terrible single use plastic bottled version that we hope will be banned soon. We like Greek tap water ! The period of relaxation became our kind of holiday, for we had plenty of time to stay in places we liked for a few days . Even the invasion of jellyfish had halted, and  our anxiety about the meltemi wind faded as we got more confident in our taut chain. 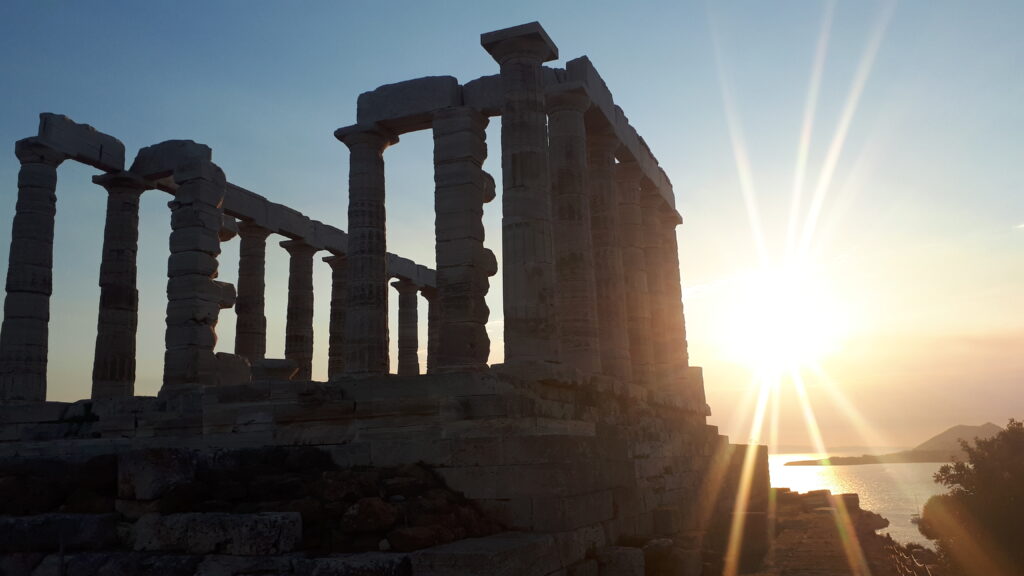 Our journey south to the cape later allowed us to anchor below Cape Sounion. We climbed to see the pale stone columns of the temple of Poseidon, where a crowd, like us, was mesmerized by the fire of the big orange sunset. This is surely one of the finest backdrops in Greece. ( they used to use this view on the holiday posters.) We scrambled down the steps in the dark and the path took us to our beached dinghy, tubby mc tubface.  ( Parrot chose the name ). It was very hard to get onto the yacht. The swell had built into white surf breaking around her and she tried to thump the stern down onto our dinghy. I thought of King Aegis then.  He threw himself off this cliff and drowned, according to the legend. He was stricken with grief to think that  his son Theseus was dead because the homecoming galley approached with the wrong coloured sail. That is why the sea is called the Aegean.

We stayed in bays to let more winds pass over  as we sailed and motored south and west. For example at the small harbour of Leonidas, tied stern-to the stone pier was safe from big seas but very violent in rolling from side to side as the swell curved inwards. After yet another challenging forecast we decided to go before a strong blow, and left at sunrise for the big challenge,  the course southwards, for the famous cape Malia.  The wind was from the north, the seas building behind us, bigger until sometimes breaking. The rollers wanted to grab us and spin the yacht round. Not a good thing to be broached side onto to them.   Sarah was at the wheel all day, for this reduces sea sickness. We did not resort to the nips of brandy or rose wine that we have found can also work.  The headsail Genoa was pulling us to the grand climax of our summers ambition – cape Malia. We often cruise for days using just this this big sail, so that we can quickly reduce canvass when gusts come at us.   Within less than an hour of rounding it, although the wind not bad at the point, we were hit by ferocious gusts. The yacht was flattened sideways and a great crashing of things came from down below. ( actually not as bad as it sounded, as all he lockers doors stayed shut. It’s the things inside that clatter. ) 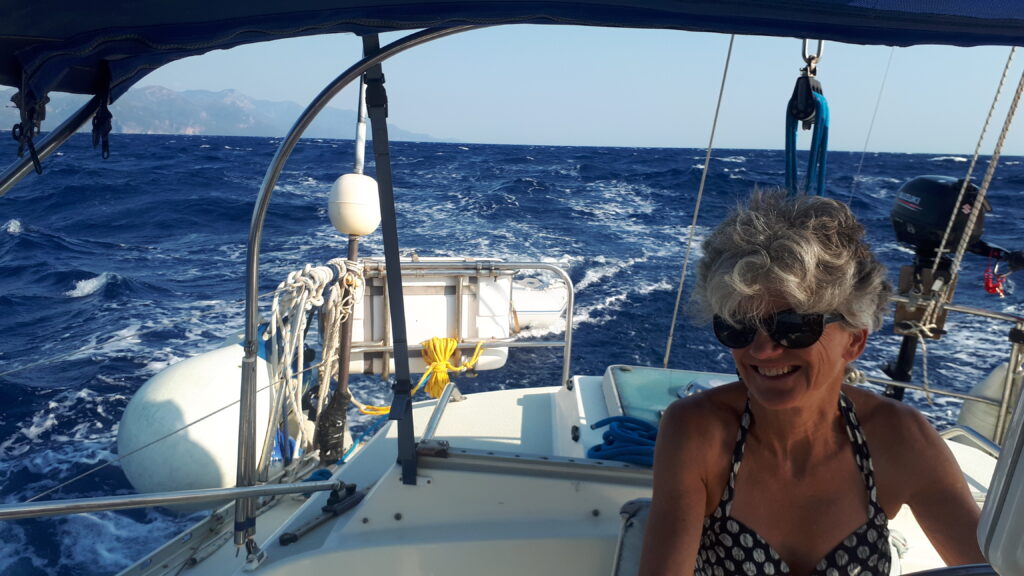 We could see why Homer described Odysseus as being blown off course at cape Malia. In spite of waves grabbing us from behind, and of wind trying to broach us, Sarah held our course.  We rounded up westwards  from the Aegean into the Ionian sea. Our destination continues next year for our return to Ithaca, which Homer’s hero did not make for some  years. Feeling happy with our boat we have left her out of the water in Kalamata where we spent some of the  days visiting more Greek and byzantine ruins.  After 4 weeks sailing we had arrived two days early. As the sun rose over the mountains one morning we arrived at Ancient Messina. This  vast ruin had a surviving entrance post, some two storeys high. As the sun kissed the mosaics we sat in the large arena – a perfect Greek circle, set in the hill side. I have never seen so many standing columns on one city site, there were hundreds, casting long shadows onto the fine mosaics. 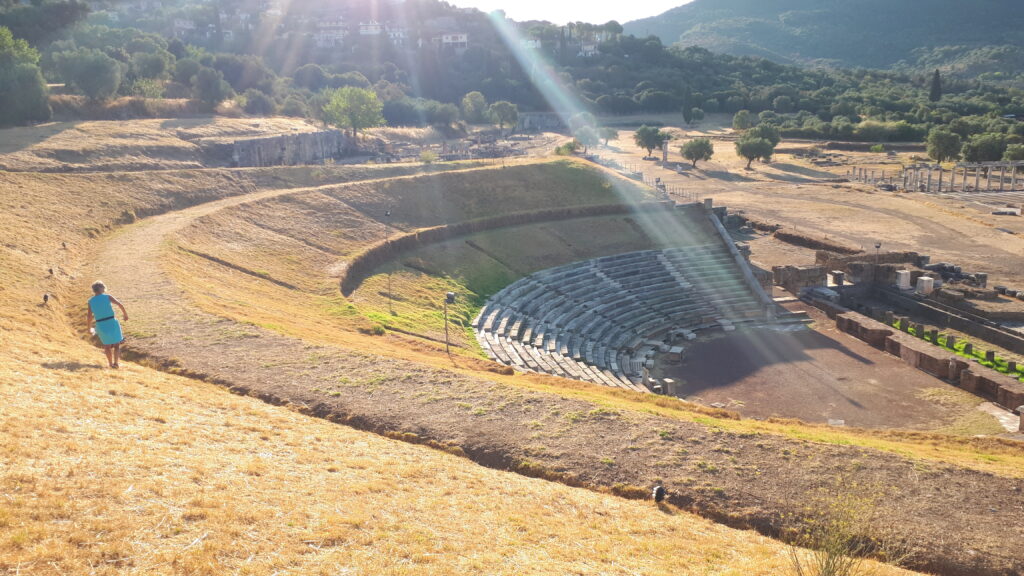 We celebrated between ancient city trips with meals in Kalamata, consuming the finest olives in Greece which grow for miles all around. We met other crews and got some of them to change from single use plastic and enjoy drinking jugs of Greek piped water – its perfectly safe ! Next year we will sail back through the Ionians again and take a winter berth at Messaloni. Our journey has become a circle which now allows us to re-visit favourite places…