Although it was a rolling sea outside, exposed to the north, Skopelos port was calm as usual. Sarah berthed us perfectly stern to the quay facing the ferries. We noticed the next door yachts had not quite laid their anchors out straight, and yet successfully dropped ours between theirs, no crossing.  By the time we left the next arrival had crossed us – “not enough attention to the line of everything eh ?”, says Parrot. As at Orei earlier in the month we lift him off us with our big C shaped grabbler. 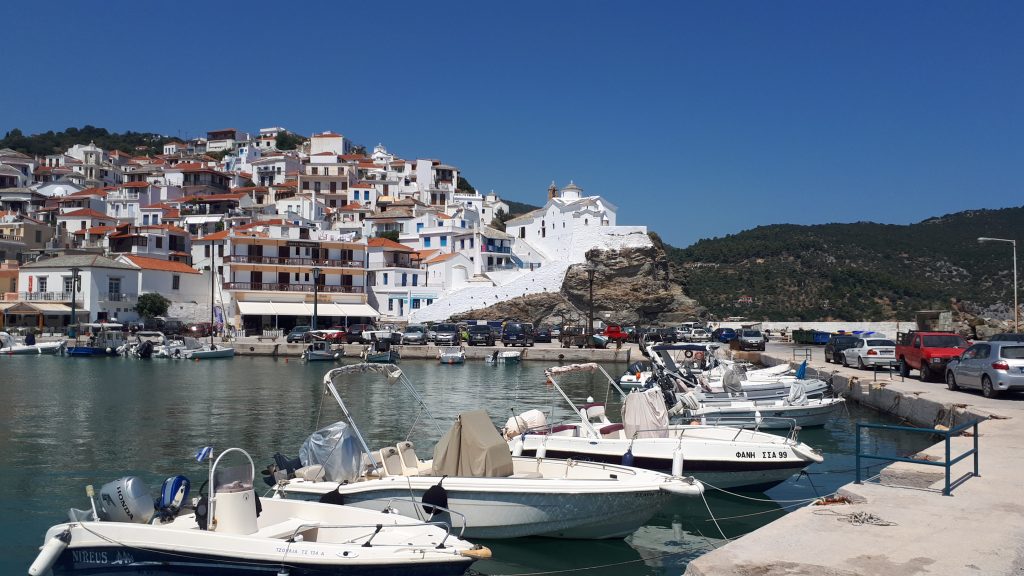 The town rises in a stunning hillside cascade of small white buildings, ochre roof tiles, all with vertical windows, and there is nothing over three storeys. It is largely a re-built town and the work follows a design code which really has worked. Exploring up the mule-width alleys there is a labyrinth. At every corner is bougainvillea and jasmine. From the Mercurious terrace bar we drank cocktails served by a young woman with cut glass English. “I learned it from Harry Potter films,” she said. Parrot notes that most of the actors were privately educated…

Dining again at Moyrie’s tavern, she gave us a friendly welcome and a glass of tsipouri to start us off. Again with a fine harbour view, we watched the occasional yacht being hooted at by the ferries. The sound must be louder than the pyramid stage at Glastonbury. Don’t they notice the anchor chain being raised as they glide towards a doomed encounter? Sarahs favourite there was the lamb chops, and too much Greek salad so they gave us a doggy box for the next day lunch time. Moyries finishes with a sweet yoghurt and cream dessert, which we have been meaning to copy.

The house museum half way up the first lane is a three dimensional warren of rooms. They overlap different sized ones below like a stacking game. The interiors are full of the doctors’ possessions from over a century ago. A time when patients had to pay for health care. Bring on the famous Mediterranean diet, says Parrot. Well they are not so healthy now. Greece adults are the fastest fattening population of Europe. They have discovered fried foods and massive rich cheese pies. We have a cheese pie rating for Greeks that we see. Minus 5 cheese pies is a very large Greek. Plus 5 is athletic, fit. Maybe I am only a one minus cheese pie rating, as I try to swim, avoid pies. Trying is not enough, as I love the odd Baklava, honey heaven, and say 500 calories ? and then there is a spinach pie – but wrapped in divine puff pastry. Sarah says we should do Yoga. I have just read an American book where a victim goes to yoga with his wife (under duress.) At the dancing dog or whatever it is, he farts. The class laughs at him. He storms out. I am scared it would happen to me too. 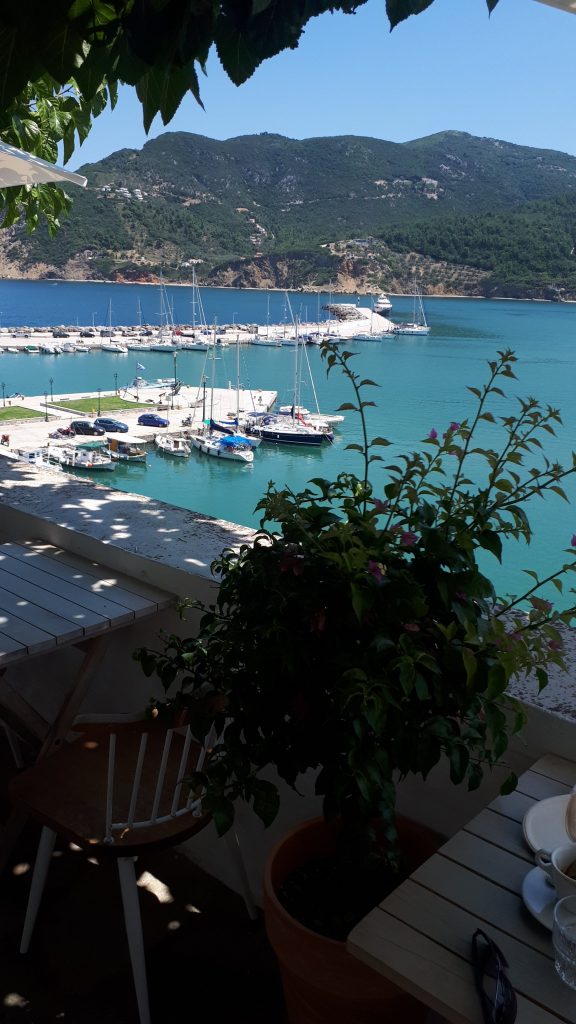 There are over 200 churches in Skopelos port. We can see many from the boat. Some are small, living room sized chapels. Some have campanile towers that ring the hour. The half hour single  bell is the same middle C note as my phone alert, so I learned to ignore it. The cliff top church near the harbour corner has a glittering golden interior lit by candles, like the inside of a jewel box.

There is a small shrine by the old river bridge to the memory of Bishop Rhiginos. He was beheaded by the Romans in 362 AD. I searched for it among the tall reeds of the back lanes without success. On 25th February there is a procession and the relic,  being  his hand, is displayed. He had slayed the dragon of Panormous, a beast so savage that it scrunched up humans like biscuits as it ate them. Other islanders used to leave their criminals at Panormous where their fate would be to be gobbled up by the dragon.  To end the terror  he disguised himself and joined them. The dragon fell for the trick and advanced on him licking its lips. But Rhiginos pulled out his cross, and some say chased the dragon by shouting an interminable chant. Near Staphilos bay the dragon turned tail and jumped for the sea, but was caught and died in a rocky cleft. This is still, today, called Dragontoskisma. The event of over 1700 years ago are part of the story of the final century when Rome tried to “re-convert “ Christians. The dragon must be a metaphor about  the fearsome power of Rome still reaching out to terrorise the islanders.

Our  next voyage will be to the island which has been occupied only by a monastic guardian for over 1,000 years.  Kira Panagia.