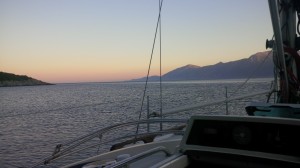 wild gas hunt, or turning back, we motored in calm seas round the bottom of Cephalonia, and up to Ithaca. Eight hours of runningthe 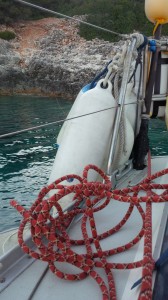 engine was not what we came all this way to do – but Poseidon has stopped throwing wind and waves at us. Parrot said, “ So do you turn back often…”

Yes we have turned back a lot before this trip – and the important thing is to do it soon enough.  Moody yachts can take big seas, but we have often been wary of Start Point,  during our years of going round from Dartmouth to Salcombe. That journey has taken us over more wrecks than any other stretch of English coast. They even found a pile of Saracen gold in one of them.

So these three times the mood on Shearwater was that it is a good decision to stay safe and undamaged. Holiday mode kicks in when there is no deadline . The clear bays with golden rocks were a treat near Argostoli, and in the town we liked watching people and turtles.

At Ithaca in the uninhabited bay we felt our holiday of relaxation had started properly. Two days of swimming, eating and people watching (on boats, having a good time, like us. The wind blew out from the island down a ravine. Could it be the very one that Odysseus crawled up when he returned. Parrot and kids say stop talking about the storey. So stop reading here if you are not wishing me to continue.
So then,
royal son of Laert 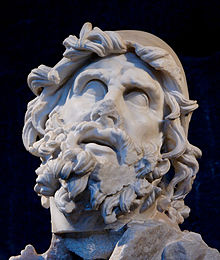 es, Odysseus, man of exploits,
still eager to leave at once and hurry back
to your own home, your beloved native land?
Good luck to you, even so. Farewell!
But if you only knew, down deep, what pains
are fated to fill your cup before you reach that shore,
you’d stay right here, preside in our house with me
and be immortal. Much as you long to see your wife,
the one you pine for all your days . . .

Calypso made this plea to Odysseus begging him to stay with her.  But in the end he did return to his wife after 10 years away. The only one to recognise him was his dog, till he re-strung his bow. Penelope had remained faithful and re-united, they enjoyed “ a night of love”.

It’s only a legend, based on fireside story teller’s versions of more than 500 years BC. But it has Greek themes of bravery, seafaring exploits and revenge.  It might be set in the late Bronze age, but little snippets of etiquette remind us, for example, of how to treat a guest. When Telemachus goes searching at another nearby palace for his father – nobody asks him what he wants until after there has been a meal to revive him. It’s the Romans who decided that Ithaca was the home of Odysseus , ‘’Ulysses” as they called him. But there really was a palace here,  the kingdom of Ithaca and Cephalonia. Wearing my architects hat, I can visualise how Homer has heard of a palace with walls of gold in the great hall. He must have meant polished Bronze….