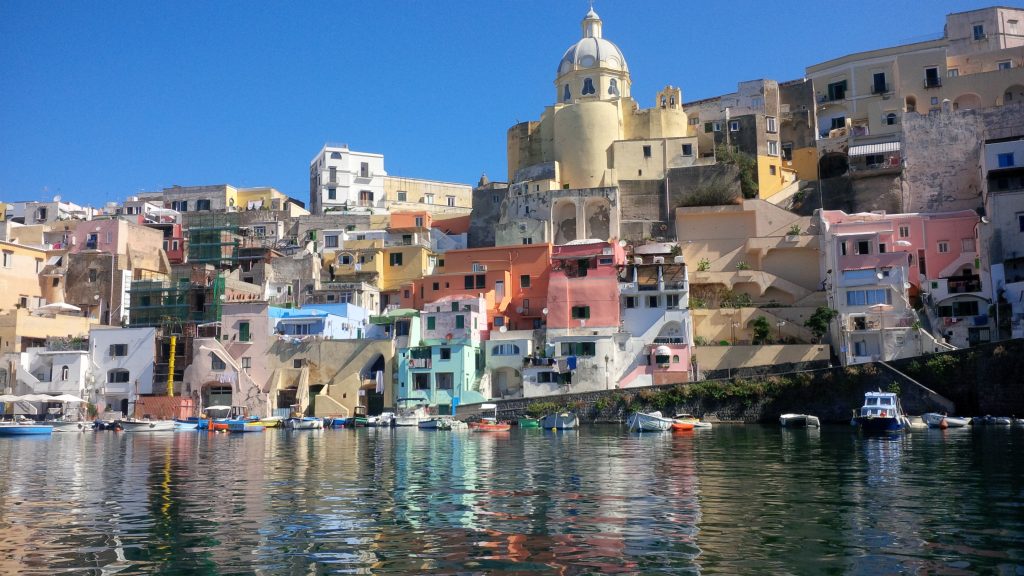 We motor-sailed to Procida in light winds and anchored in 5m at  the south bay using my photos of old charts. The pilot book said no overnight stops but there were about a dozen yachts doing the same. Facing us above were  houses in staggered levels – there were bright colours in warm shades of pastel coral, and brighter lemon yellow. The fishing boats in the foreground occupied the clear shallow harbour behind a stone breakwater. The colours were from the days when a fishing boat crew wanted to see their own home stand out from down there. Close up, when we walk up the mule width tracks, it was a medieval layout, but re-built many times, flaking, patched up and showing damp under the arches.

“Napoli – now that is something else. Another world”, said Carlo as we drank a spritz  Aperol and a  Campari  Soda on the quayside. It was quiet, for no cars could reach it. He was a retired  motorbike polizia from Naples, who returned to his childhood village here with his son Vince for holidays. He was stocky, square jawed, in black, his son tall with a beard neat and smiling. (working near London in a Montalbano restaurant, back to see his dad). Vince knew where the real Vigata is located in the films. We are addicts for Salvo. Why are there no humans in most of the street scenes ? Answer was there none. When we described our earlier sightings of   the Guardia Finanzia checking an Italian yacht for papers,  Carlo made the sign of the malochio – first and fifth fingers giving the evil eye. It reminded me how it was to be with a dad on the waterfront of his home town, Lowestoft, sitting , drinking tea as people strolled by. A school friend of his might stop and chat. But that was in the 1950’s. It seemed as if Procida is also stuck in the charm of the 1950’s film, “Il Postino.”… nothing has been modernised, and generations return there because they like it. Sorry I cannot say the same about Lowestoft.

Vince  arranged a laundry for the next day, being  10e for 10kilos. Nobody came – that’s Italy.

After a calm night we walked up the winding lanes in a very zig zag route. Not many people had been on the quay, but this side of the island was the older hilltop village. I have never been so lost. The mule-width lanes confounded us. The homes were in poor condition and seemed to be waiting for holiday lets to boost investment. All was dusty, and felt little changed from the 1950’s.

In the windless heat we found Procida marina on the  north side. There were about 40 berths, and for our yacht it would have been 70euros.  Down near the waterfront was an atmosphere of holiday shopping and signs telling is of accommodation available. With a clank the front of the ferry dropped onto to the quay and Italians walked down as they do all over the Mediterranean.  A ferry landed Italian holiday makers, who were making for the sights such as Terra Murata, the ancient hilltop town with cobbled lanes that had trapped us while getting lost. Some were off to the dark sands of Pozzo Vecchio, where the famous   story of Il Postino was filmed in the 1950’s. A  theme of love by the postman  in two senses, one for a woman and one of his passion for poetry with the exiled Pablo Neruda being his tutor. We have watched this film in order to pick up more Italian. Sadly the lead actor died of heart trouble the day after filming finished.

We were drawn into a large  art shop full of modern abstracts. Mostly they were by Luigi Nappa, a weatherbeaten ex sailor, wearing his navy crew neck jumper. “ Not like Chagall, more in the style of Matisse,” he told us. “We can paint together, “ he exclaimed after I told him I do paintings too. “ Come to my studio, and we drink wine while we do a 2m square canvas each !”

I liked his giant cushions, full of holiday colours and of characters frolicking about. As we left he gave us a present of his own wine with one of his original labels. “ Drink it chilled. It’s a dry wine, low alcohol.”

Luigi invited us to the launch  a couple of days later. of his daughters designer jewellery exhibition. I love previews. In Bristol, London, Paris…  everyone goes, dressed up, and you meet people.

But the threat of windier weather, and the need to get to our next guest picking up port decided us to move on. I was wondering if an artshop owner in Bristol,where we live, would treat us like old mates, take us painting, feed us wine…? Noted to self – “must be kind and welcoming to total strangers…” Perhaps it only happens in Italy? Long ago I was drawing the hill town of Civita di Bagnoregio, to which we had bicycled before sailing holidays took over. There was a chinking of a wine bottle and two glasses being set down beside me. “ I love to watch you drawing with a pen and no pencil, “ said my new Italian  friend, of senior years, a silver haired local man. “ We drink this together for the afternoon yes? “….so we did, and I still have the drawings of that magical steep pile of  weatherbeaten stone homes set on a volcanic rock. Sarah minded  our two year old Louisa playing in the square, where there was no traffic, the town was empty of habitation. 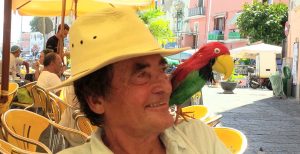 At dawn in this bay, a swell came in which rocked us from side to side. We had turned gently sideways to it in the  night airs.  I wished that the stern kedge had been put out, but the swell  increased so we motored round to marina Corricella on the north side. We filled with fuel, and water not because we needed to , but just in case of not knowing if it would be easy to get after the next passage around the bay of Naples. We paid 10 euros to berth as a day visitor. Took 25 L of diesel at 1.80 euros.

The quayside had chandlery , holiday shops and cafes to serve the holiday ferry. Intense cobalt skies and pastel ochre  colours of this seaport were easy on the eye. We felt as if we were exploring a more real Italy, being closer now to the bay of Naples. Strangely, there were no non Italian boats there to enjoy it with us.

Our next passage of only twelve miles would allow us to drop anchor in the soft mud around Pozzuoli. The concrete that changed the construction world in Roman times – how exciting.