Arriving on a Monday, it has been a full week of preparations. This is partly because Dimitrios at his Dimsteff yard was rather late in getting our jobs done. He decided to call in subcontractors to shot blast the keel then resin fill, then grind again, then prime. It is now like an aircraft blade. Big D said with a smile, “should add a knot to the speed…”

We don’t mind, as we have 2 months this year – what a treat. The journey this time took about 12 hours, flying Bristol to Athens. The bus from the airport and then from station were not quite possible to connect in one go, so we had a taxi from the nearby village. The spine road to North Evia goes through the mountains and zig zags into canyons, all  clad in pines. We see the resin collection bags on the trees for some families caring for over 6,000 of them, this is still a way of life to make a living , although it is subsidised. 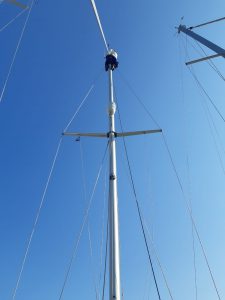 Down through the oaks and poplars, the yard is on the edge of the port in a more open coastal strip of orchards and olive groves. Although it is next to a derelict  brickyard, the streams have terrapins wiggling their way up and big frogs sitting disguised by colour in the green weeds, and are teeming with large violet dragonflies. We hate the guard dogs which thankfully are not let off their leads this week. When they stop barking the cicadas make a loud background noise, mixed with the calls of the terns who actually do seem to be fishing as they dive into the sea. The scent of pines and of thyme followed us among the red and white Oleander bushes as we went swimming every few hours. The water is clear and feels like a tepid bath. Hundreds of Greek families are swimming further along.  The school holidays season has not started yet and soon parts of these soft sand and rounded pebble beaches will be full including all the recliners under the shade of the straw sun posts. So I dont mind going up the mast in such a lovely place – to fix a new wind speed sensor. Sarah winds me up. Double rope halyards for safety. Her name this week is “Mighty Mouse”.

Dimitrios has become quite large and yet the diet of cheese pies don’t hold him  back from snorkel diving under every launch or haul out under the huge long trailer that has to be set under a yacht. He sat in his large store and as usual remembers everything from last autumn when we settle the bill. It has been about E 1,300 for the winter storage, and about the same again for all these current jobs. He leant back to explain about the new cruising tax, the Tepal. With a very big smile he said, “ Go and see  Vasilikis the harbourmaster, NOT the port police….”  The smile got bigger as he repeated it for the second time.

We knew from pages of Cruising Association logs since the tax started in May, how difficult it is because the website hangs or crashes if one field is done wrong. “ Come to my office at 9.00 pm “ said Vasilis. He looks a bit tired,  shy and in mid career with greying hair. But he does not get out in the sun much.  Being from Orei himself he speaks enough English to go through it all with Sarah. He was all smiles.  “No don’t enter your phone number that way, “ he explained along with some other tips to avoid the internet glitches. The on line registration sails through. Then we were off to the post office to pay, 25 euros a month for our size boat. It would be nearly double if we were, say a 12m length.

Do we mind paying this tax? Well there are other regions who catch you with a visitor tax, such as in the alps while you arrive on a coach. And places have local taxes such as in Manhattan. Believe it or not, the city of Bristol is thinking of levying an entry tax to the centre  for motorists, just like London’s congestion charge. Parrot says , “ Bring on the city state of Avalon.” The Greeks need all the moulah they can get from visitors, which is still their main income. They are still in the bottom tenth of the world league of non tax-payers themselves, but seem to muddle through. They came out of special measures last Autumn. What does that mean, end of austerity ? No it means they can borrow on the international bond markets again. More than 50% of the under 25’s are unemployed in some towns. The new government elected last month has moved them to right of centre.  Typical really, a government of austerity gets kicked out when it starts to work. 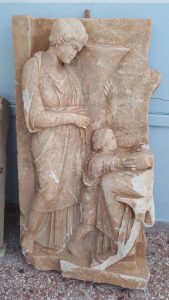 With other repairs we spent two weeks in Orei port. Locals such as serious Dimi, began to greet us. He us tall, mid career, and studious. Suddenly appearing from behind his store door he translated the Greek notes on the two beautiful classical period grave carvings. One being a woman, child and missing grandmother. What is she holding, ?  He being the guardian of the inner store said “its an amphora, come and see, and don’t tell anyone I showed you. “ Well his amphora was nothing like the woman’s…. So I must consult Louisa to see if she learned a new shape at Kings .

At last after solving the slow gas locker smell with the help of big Dimitris dad,  we set sail into the gates of the wind, “Anemopyles”.