Motoring east on a calm morning brought us into the large south facing bay on Skiathos island: Platania. The soft green curves of the mountains around it seem to have been sandpapered by time. A lace netting of many shades of green overlays them, for this is a very verdant place.  One beach bar fronts a few dozen holiday apartment blocks, well hidden in the pines and olives. Grapes were forming on the vines where we had coffee …. But no wifi. About  a dozen yachts also anchored. With a depth of 16m we laid out 50m of chain and felt safe.

The holding was good but next morning the wind and rollers came curving in from the west. It was too rough to hold a cup of tea. So we rowed to the beach and caught a bus to Skiathos Port. The heat was baking the quaysides to a frying pan temperature, and we could see why the main activity was charter boats going out for the day to the bays, dozens of yachts too, jammed the continuous line of moored boats, very few being visitors. A bit rough matey for a trip that day I thought, but some boats were still going out. The highlight being Mama Mia beach were some of the film was shot. Up the polished stone shopping street we found the only chandlers where we got a chart for Sarah to practice her yachtmasters course plotting. It was opposite the cinema where they were playing, of course, Mama Mia.

So for the passage to Panormous bay on Skopelos we kept the cover on the chart plotter gps display, and steered 112 deg. Even better, at last we were sailing all the way… the NE wind allowed us to be close hauled on just the headsail. Sometimes we did 6 knots as the wind made dark patches on the sea in the lea of the mountains. Sometimes the sea was rough enough to be breaking white waves but not over the yacht. Putting the main up would be saved for another day, as we were very happy with the speed the genoa gave us, and …. Have become slightly lazy sailors ! 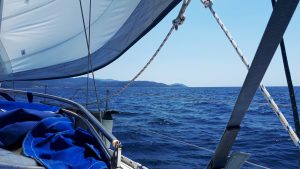 Off Panormous bay we anchored in the narrow inlet with the stern tied to the white rocks. The hills around it are clad in many kinds of pine of many shades, with patches of pale olives. We stayed long enough to get into a routine of swimming in the water which was a clear as glass. The clarity made it easier to see if anyone had crossed our anchor line at 6m depth, for we were surrounded some of the time by a flotilla with some novic 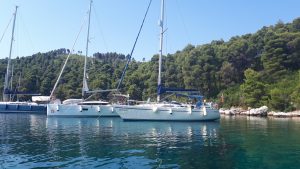 e crews.  Sarah would do her training swim across the main bay to a beach bar for her café fredo –  half a mile each way. Rowing in the dinghy I did not mind that we had dumped our outboard last year when it broke down. Sarah’s project has been to get me fitter too.

Which is something that cannot be said for the walruses lying down on the rows of sun loungers in Panormous main bay. Panormous for the enormous people? The only exercise for them was to turn the bed with the sun – almost none were swimming. We began to wonder if the dozen or so fishing  boats up our inlet ever went out. Only one did so during our stay. On one of the three houses fronting the water there were builders busy on the roof – the only noise to break the peace. We rowed to the reedy riverbed looking for our yellow anchor marker buoy which had slipped away to make a voyage of its own in the strong cross wind. Tiny fish came in shoals that we watched in the evening calm as the air became soft and limpid, at one with the sea.  Indolence set in and there seemed no reason to seek somewhere more perfect. 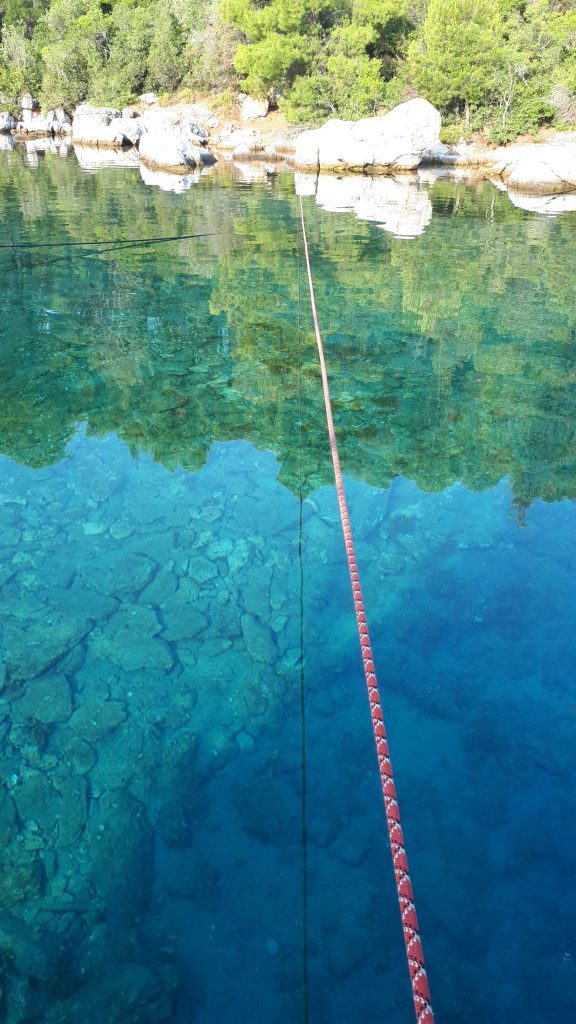