If you don’t like the risks of sailing don’t read this week’s notes. At Panormous a wind whistled in from the north at night and two boats dragged anchors, not us. So it was midnight manoeuvres for them, torches flashing.

Motoring with a light morning northerly the wind on the beam, but not enough for doing over 3 knots in the building swell,  got us to Andreamos bay, where there is a small cove west facing, that we have used safely before. 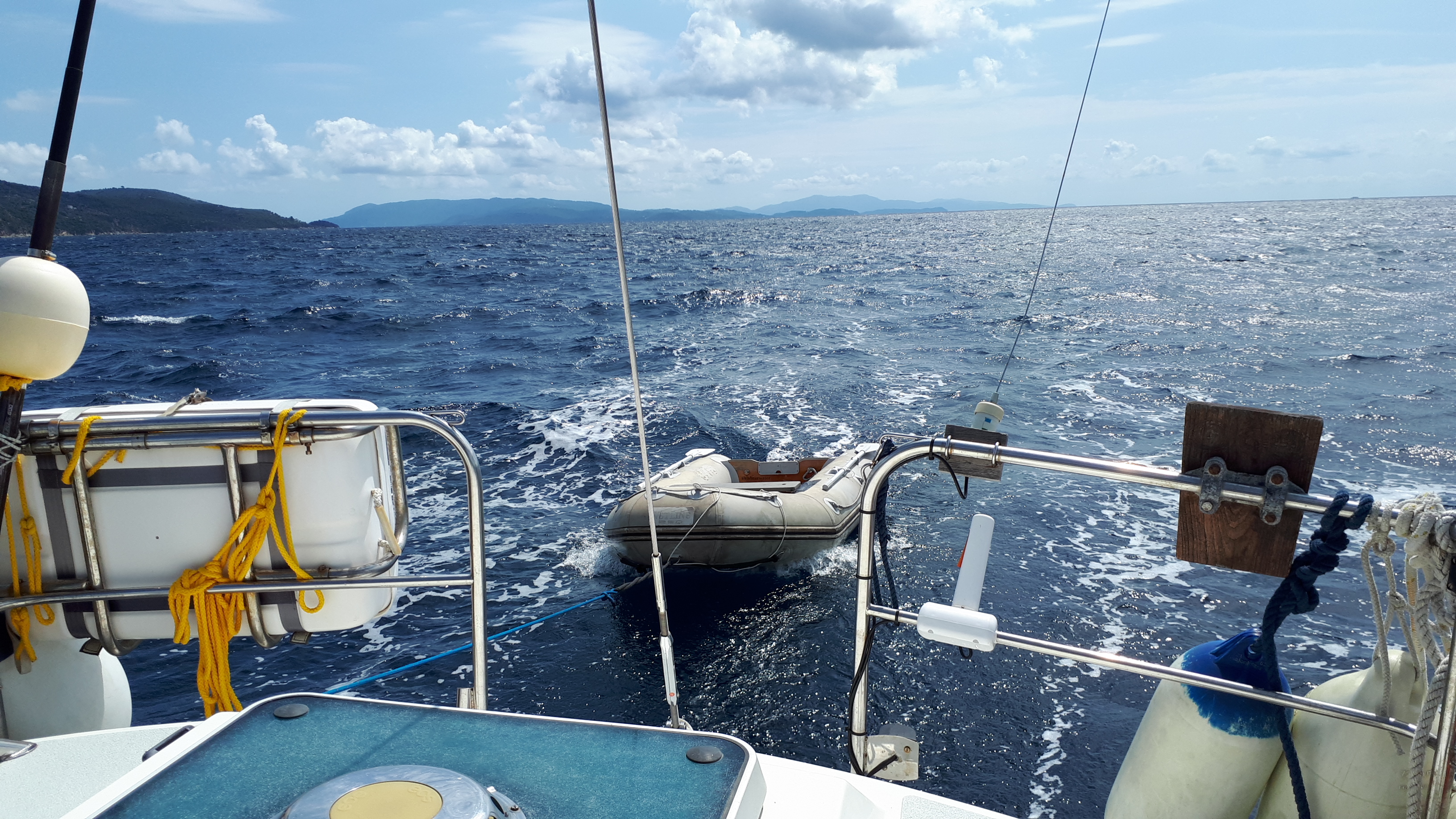 We walked ashore through the thyme scented olive groves, climbing the ancient terraces. Three fat wild  boar ran across the dusty track in front of us. In the muddy parts we could see their fresh hoof prints, and of course those skills of being a scout learning to track things as a tenderfoot came into play. Which way were they going here? Where are the broken blades of grass? ( actually I was a sea scout, so I was not so hot on tracking). 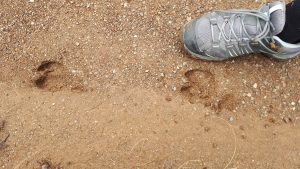 But not so this time, as the boat swing round its anchor twice, and at 10.00 pm it plucked itself out with a bit of a twang, which we luckily heard. Then through the night the wind did another 180 degree turn with more torrential rain. We sat up in full ocean storm oilskins taking turns for 2 hour watches. The anchor dragged again in the teeth of wind so strong that it blew my cheeks out like balloons if I tried to speak to it. Complaining to Poseidon of course, that the libation we made a week ago did not work. Parrot said the problem is that our guest did it , and she is an unbeliever – a woman of no faith….?

We sailed to Orei with the headsail for the final hour on a fine morning, but misty airs over the town heralded the rainstorm ahead that we had expected. The rollers built up behind us with white tops building as it does so quickly in the Aegean. 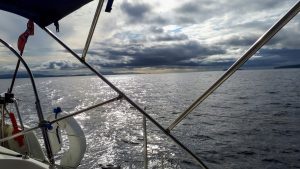 Shearwater leapt along the sparkling sea – pressed onwards by a light wind.  That night, safe on the north quay  ( berthed as all this trip by Sarah), the wind did its worst again, and people added mooring warps. Others on the south quay were blown back onto it as their anchors dragged and they had to motor out to drop them again in the dark.

I spent a day in the engine compartment, unsuccessfully trying to stop a drip from the water pump. It was seized onto our rusty old Thorneycroft, and I did not want to break it with too much force. It is now left to the boatyard in the hands of Dimitrios, who has a good reputation.

We bicycled for half an hour up to the town of Istia. We define towns as one horse places or even, such as Orei, being a no horse place. Istia has the only cash machine, and in Greece….you pay cash a lot.

Being a one horse town the centre of Istia does have a working fountain and is surrounded in a square with a canopy of pines by modern cafes. Not many people about at early evening, when we cooled ourselves with the fountain and with water and beers from one of the many laundries. Er, sorry, bars. Half a dozen bars in such a sleepy town that probably does not even afford the one horse? Two storey high radial streets, shops half empty … then suddenly in the square modern chromium and polished marble clad bars, the latest steel finishes, lighting everywhere of the concealed and feature types. I was looking at over £1m of recent investment in the bars taking my architects eye to what has been spent. Why spend this much money….?

For our last meal afloat, in the Orei waterfront taverna of Oregani we shared their marinated goats cheese, coated in a thyme leaf crust with a sauce of fig, blackcurrant, green apple and harissa. Paid cash of course, “sorry internet not working”.

Next morning Sarah drove us straight onto the trailer and then we trundled up the beach. Dimitrios dived with a snorkel to turn the big wheels to adjust the supports. Talking later he asked ” Why do you need a new water pump?”  er. it is 8 years old. ” But it is made of bronze….we will just put new seals in – spend less money.  ”  Bring it on big D ( he is quite stout ).  So we were safely on the stocks in his shore yard for the summer. All up in 40 minutes. 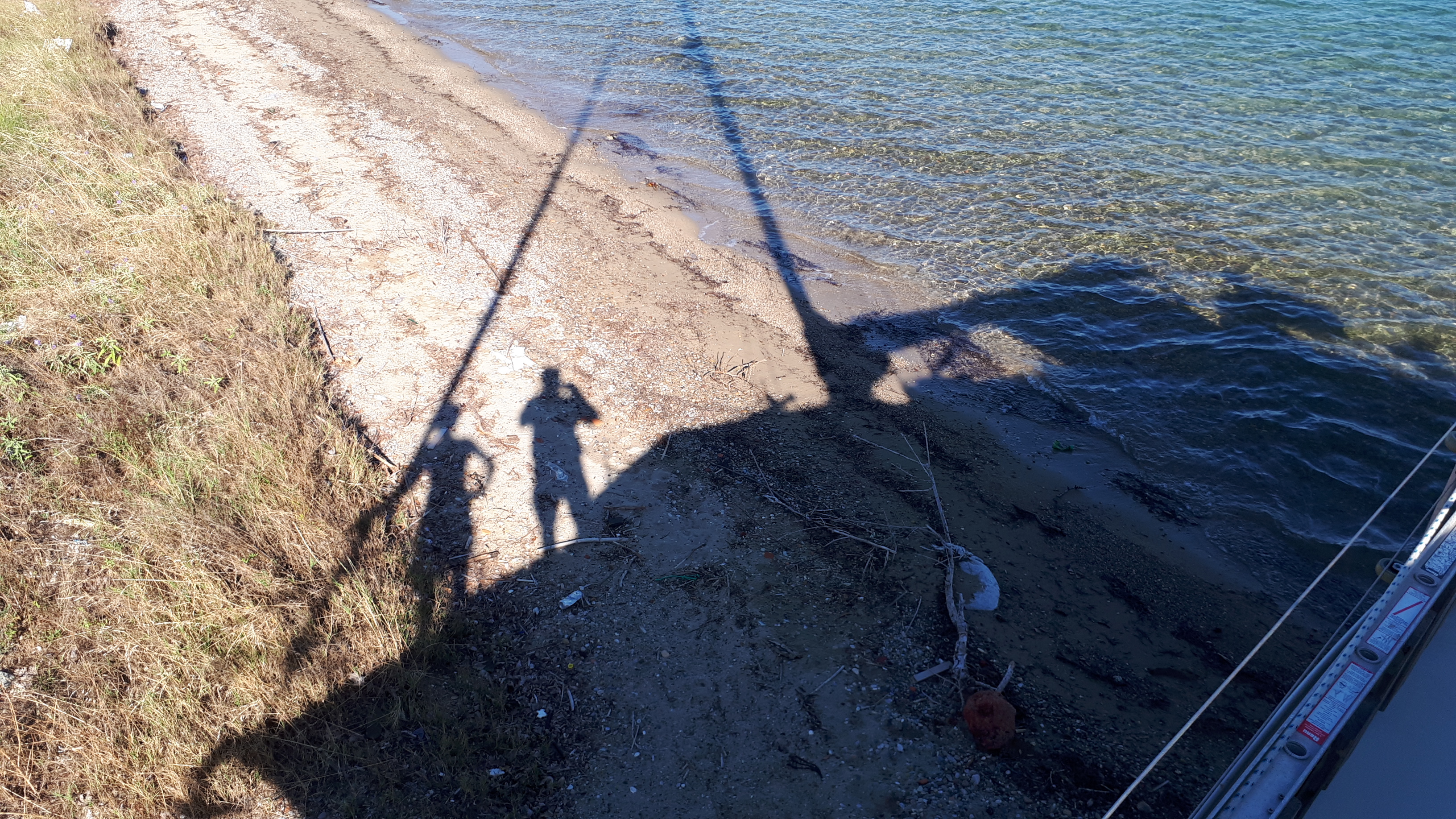 A short walk along the beach away from the ruined brickworks and slightly dusty derelict air of the yard, we passed streams with terrapins and watersnakes to arrive at a clean beach with white sunbeds in double four posters with cotton drapes. The club Bazaar fronted this extraordinary deluxe beach and there were over a thousand Greek holiday makers sunning themselves and swimming, some we met from Athens. Instead of going back for cleaning our  boat, indolence set in and we reclined on a sofa to take some time off with beer and club sandwiches. Along these beaches the sun umbrellas were going up for the season is started here around July 1st. This marks also  our return date to fly home from Athens. It was a heat wave in June for England, hotter than on our cruise. 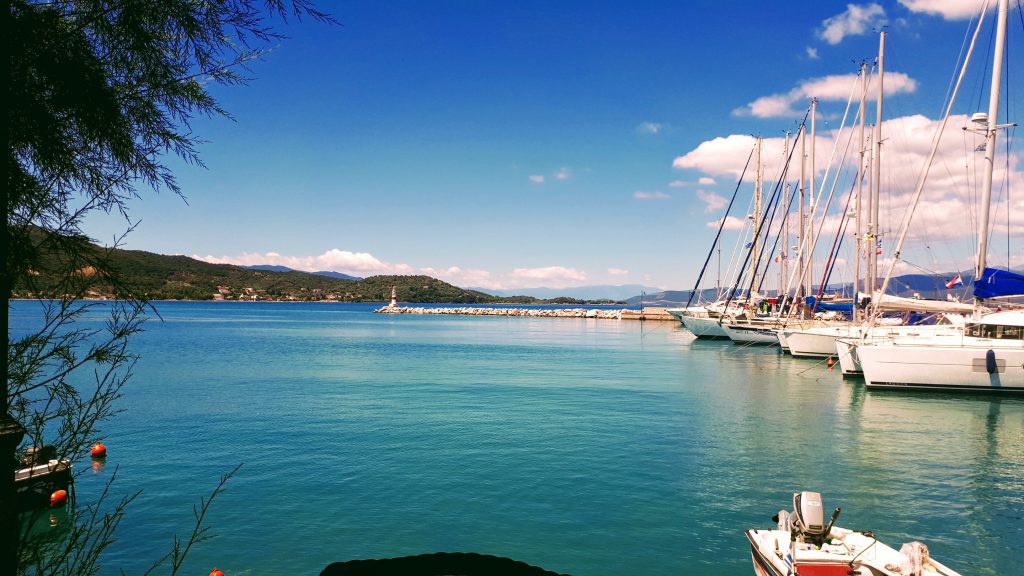 On the taxi ride to Athens  down the long mountainous island of Evia ( 3 hrs) we passed through the gorges at 1100m height. They are clad in dense pine forests. We saw the bags of resin attached at shoulder height, some red, some clear. This local industry supplies 200 tons for all of the needs of Greece. A family farms up to 8,000 trees to make a living selling up to 20 tons a year– although this is subsidised so as to keep the rural community working. It mostly goes to make turpentine in a single factory east of Athens.

We got quite interested in Evia and its stunning mountains – and so on our return we will travel again into the spectacular parts, and to the thermal baths  town of Loutra past which we had sailed. That will be in August. 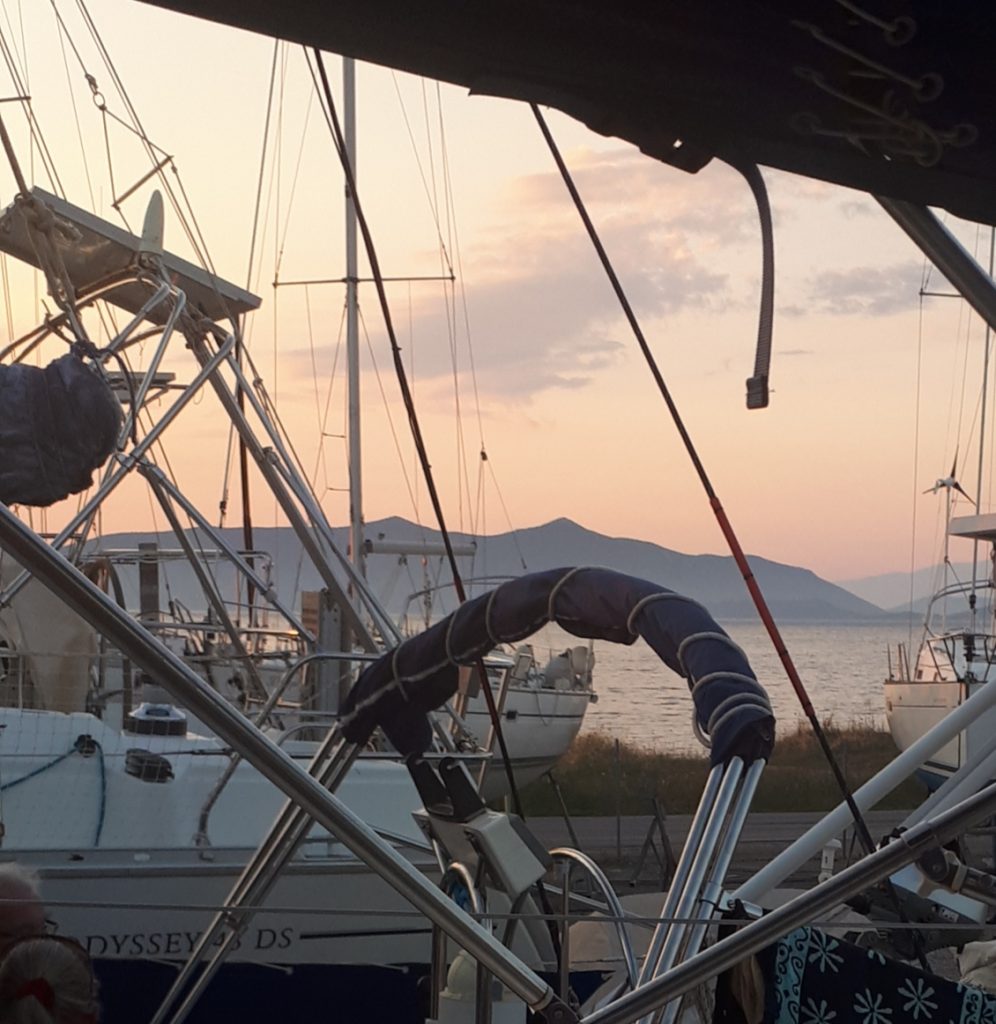