The island is clad in greenery and shaped like the back of a  dragon, being like all the Sporades a  mountain that has risen up from the sea  bottom. Along our journey to the port town, of Skopelos port we see inlets and south facing  havens. (there are almost none on the north side in the path of the Meltemi). One of those has not changed its name for nearly three thousand years, being Stifalos bay. Once there was a Minoan prince there, for they have found his golden sword pommel in his grave.

He was the son of Ariadne, for it was she from the palace of King Minos, and she married Dionisus. Parrot says this is mixing fact with legend – are we in a land of magic realism? Yet is there something apart from Dionisus the god of wine to explain why this island was the premier wine producer of Greece until the devastation of the phyloxeria in the 1940’s.

‘ That’s a lovely dress where did you get it, “ said Sarah to the charming woman running Anna’s restaurant in Skopelos Port. She replied that Anna, her mother had made it. We ate spicy chicken and lamb in the open garden. The air is heady with jasmine scent and the alleys in this part of the old town, the Chorus. It rained hard just as we paid, so we ran down the zig zag routes among the intricate 3-dimensional puzzles of the white houses. It is one of the most complicated jumble of buildings to be found anywhere, for alleys lead to dead ends or to narrow slots clad in crimson bougainvillea. There are said to be over a hundred churches, and one of them high on the cliff overlooks the row of yachts where we have berthed with about 30 yachts. We swam next morning in the small beach just outside the end.

Along  came Eveline with our laundry that morning. “So what is it like sleeping so near another boat,” she asks with a saucy laugh. “Can’t you hear them at night?” Nudge nudge, wink wink, say n’more….

Our two guests arrived from the ferry. As they are Sarah’s friends from long ago, there are a lot of laughs with chatting. We got them learning ropes, starting with fenders. After anchoring in a few bays, still motoring east along Alonissos, we encountered storms and very heavy rain,  but no dragging of the anchor. Three cheers for the 60 meters investment. At the south bays of Kira Panayia we anchored in fine weather which turned calm for us to enjoy this very special island. It is a nature reserve, scented with thyme, sage and maquis, only inhabited by wild goats, and the guardian monks of the monastery. We spot the secret pirate tower that I mapped last time.

At dawn we motored up the east side and anchored with a line ashore in the small bay which gives access to the steps. It is only do-able in a calm sea, and we planned to leave before the usual midday wind came. 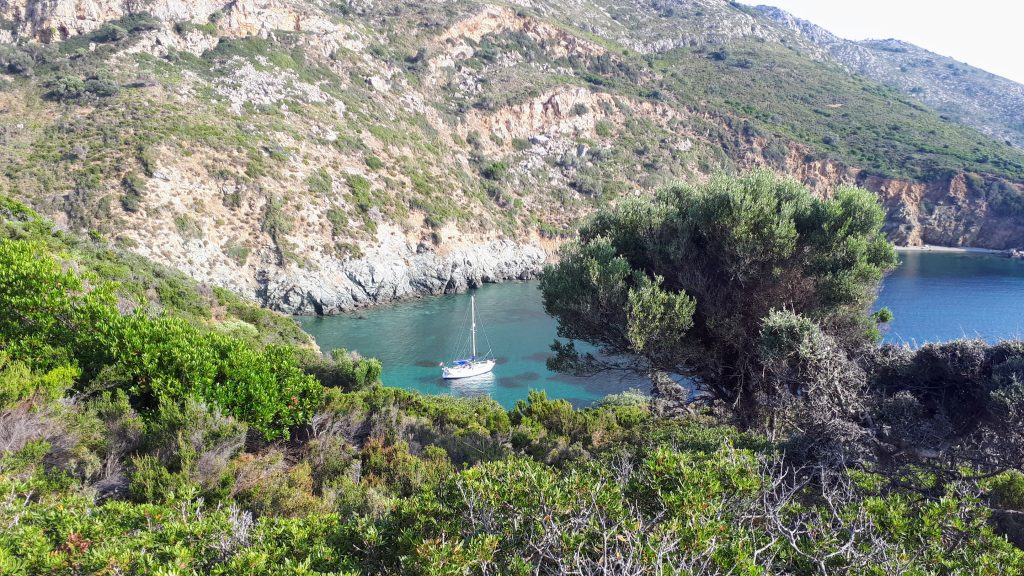 We have visited it since our sailing honeymoon over thirty years ago, when it was a ruin. But this time all is wondrous. We hesitantly tried the  solid courtyard door, not wanting to intrude. Silently monk Hariton appeared. 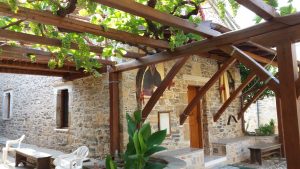 “Would you like coffee ?” he asked. He turned out to be  a gracious and engaging guardian. The coffee was strong and sweet, it came with a small glass of  tsiporo. ( firewater spirit like raki). A bit strong for 9am, but hey we are being treated as welcomed guests . On the table under the vines in the courtyard he placed rose and lemon  loukoumi ( Turkish Delight, though we won’t say the T word in Greece ). Also a glass of  water from the white marble fountain, the supply pumped up from a spring using the power from solar panels. 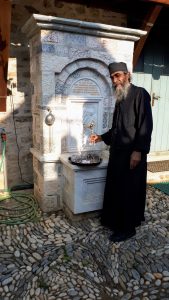 “We get a day tripper boat in the middle of most days,” he explained. “ We don’t charge them although they can leave an offering”. Learning that I am a church conservation architect he went into more detail and explained the  Chestnut beams, new roofs, windows and antiqued dolphin floor tiles in the chapel ( from Crete, copies of the originals). We also compared our hearing aids. In his previous life Hariton had lived in London, and has a son at university. He invited us to two celebrations which include his abbot later in the month, though we were not sure about his description of services that last 4 or 8 or more hours.  “When you come again, radio me on channel 9” he said as he came to the gate to talk to the wild goats when we left.

On the steps down the cliff we saw an Eleanora falcon doing aerobatics near the buzzards. ( yes Sarah looked it up, not me. ) It dived down in a spiral out of control in the manner of fake spins at air shows. Was he showing off? David Attenborough stood on the cliffs of this island in one of his films saying “Is this the last outpost of untouched ecology in Europe?” 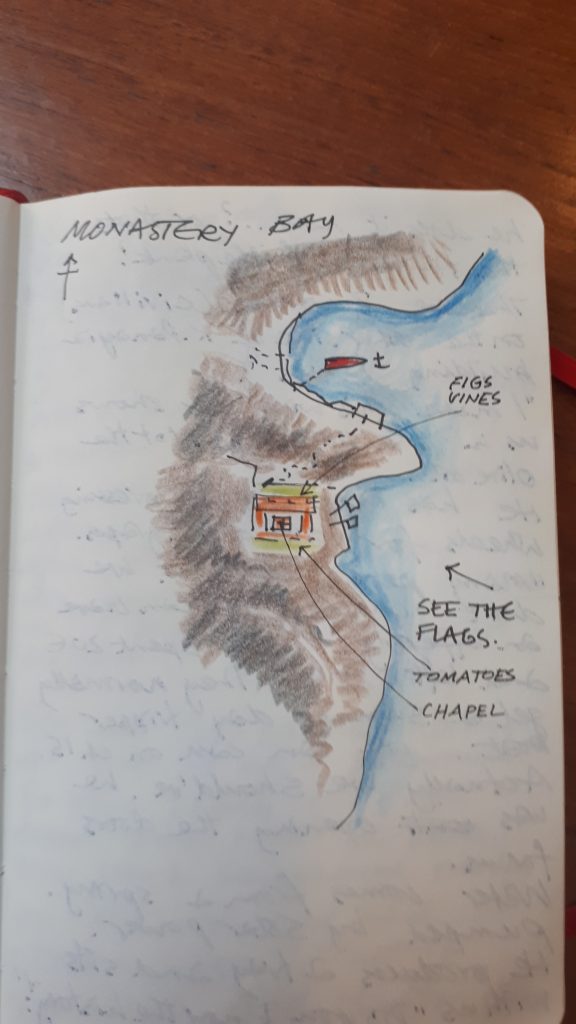 At the time of writing we have headed west to leave the guests and to weather this full gale in Panormous bay. It is quite uppy downy, but safe in here with white spume shooting past in the open sea outside. So I will stop now  as am missing a few keys.