Sarah did her high energy walk up to the temple and fort ruins overlooking the town on a rocky crag. In the older walls, newer baroque doorway details have been cut. The passageata ritual at th 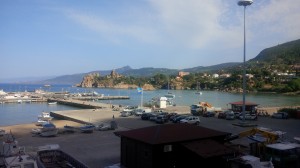 e end of the afternoon swept me down amongst the families with mums in their holiday dresses. Dads in Italy never wear shorts in a town. Not like our meaty   builders strolling about Bristol with Engerland tattooed on their calves.

Sitting in the shade of some steps leading down to the medieval laundry I watched the children splashing in one of the 9 troughs where the running water flows down to the sea. Each one has a sloping flat stone for beating the clothes.  In the face of such energetic ideas, while Sarah sweltered her way on her climb, I contemplated the flavours of my favourite ice cream: Stracciattella . 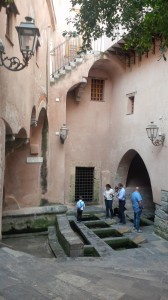 This has fine bits of chocolate throughout, which results in a smooth texture with just the slightest crunch in every bite. It is achieved by drizzling in a thin stream of melted chocolate during the final stages of churning, which hardens on contact and gets broken up as it churns.   Sicilian style gelato  has no egg or cream and is thickened with a crema rinforzata made from milk, sugar and cornstarch.

The streets had many kiosks with delicatessens serving quite highly priced wine and food. We did not shop in them for we still had the wine from Paler 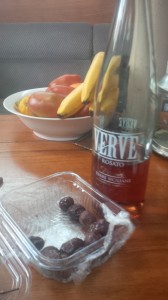 mo Carrefour at 2 euro 80c.  For example we liked the Verve Bianco Frizzante.  ( Ind. Geo. Typica). That is the lowest grade of wine … Terre Siciliana.  At a humble shop near the harbour we bought a kilo of beans and a lot of strawberries – again. Sarah made Arborio rice and beans risotto. Shesays its better to skin them. This dish lasted two days.  Her ratatouille was another favourite. Made in Cefalu with fresh courgettes, tomatoes, eggplant and herbs. All that, we ate with fresh pasta tubes.

At the final deli,
created in a stone building at the top of the cliff, we learned that it is all a historic re-construction. We learned too how to pronounce Cefalu. For most Italian words  the emphasis is on the second vowel, but here it is on the last – I had not noticed it has an accent over the U.

Good food and explorations of the intricately paved streets gave us plenty to do while waiting for the wind to turn to the west of north.  We made a chart of each variation we noted down from the Lamma Rete website. I managed to get the harbour administration wifi code by chatting to a boat trip ticket seller,  and so we did a lot of  online updating. On our last night a series of violent squalls blew in from the Northeast. Waves built up in our bay and we wondered if we were safe, but looked with a touch of smugness t o where the pilot said a yacht could tie up nearer the entrance. There, along the mole wall , the surf and rollers were crashing spume into the air, and white horses broke as the rough sea came our way.  It was impossible to row ashore, but instead of trying, we cooked our fresh supplies as the waves calmed a bit while the wind whistled.

This kind of violent squall reminded me of what Herodotus wrote in ancient Greek times. “The wise person pulls their boat up high on the beach between May and September, and fills it with stones to withstand the wind…..” Parrot says, “ didn’t know you were a classics  scholar reading papyrus from 500 bc .” ( not that I have read him, but he was quoted in another pilot.)