Shearwater, our moody 346, had brought us from Rouen through the canals. We motored with the mast on deck up the Seine, down the Marne, then through the Champagne and Burgundy canals. We put the mast back in at Port St Louis. The journey, which took us through over 200 locks, took about 6 weeks, Including a break in Paris. 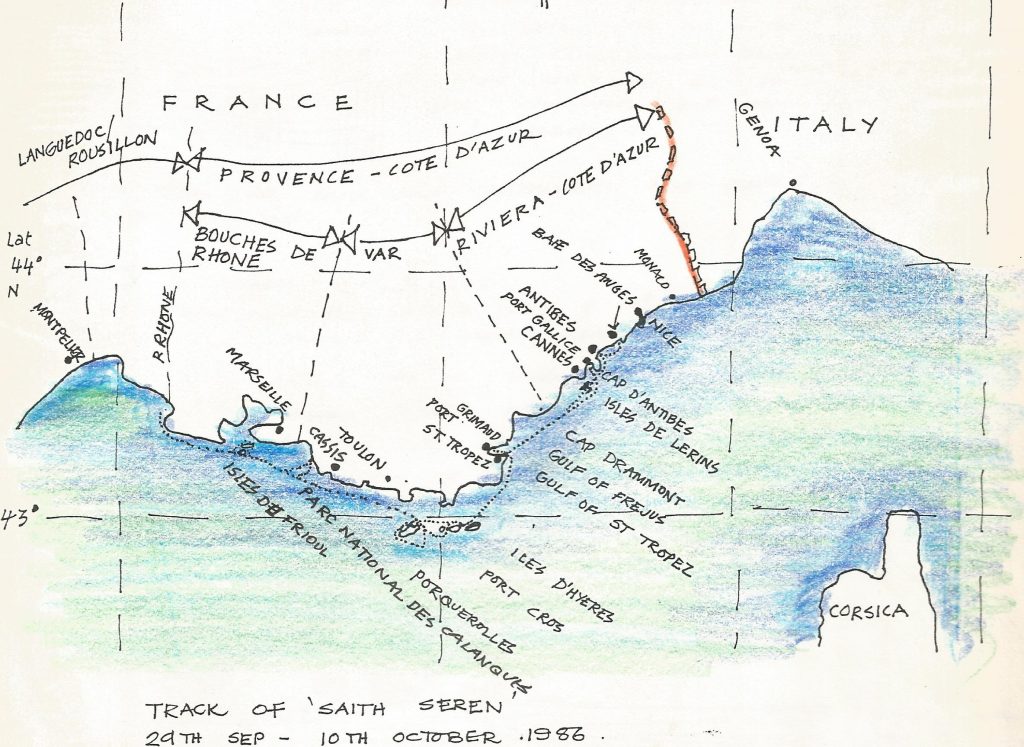 Finally we accelerated down the Rhone at over 10 knots, with just the Genny up, filled by the mistral. At the Bollene barrage we dropped 22m into the slimy, scary chasm of the deepest lock in Europe. 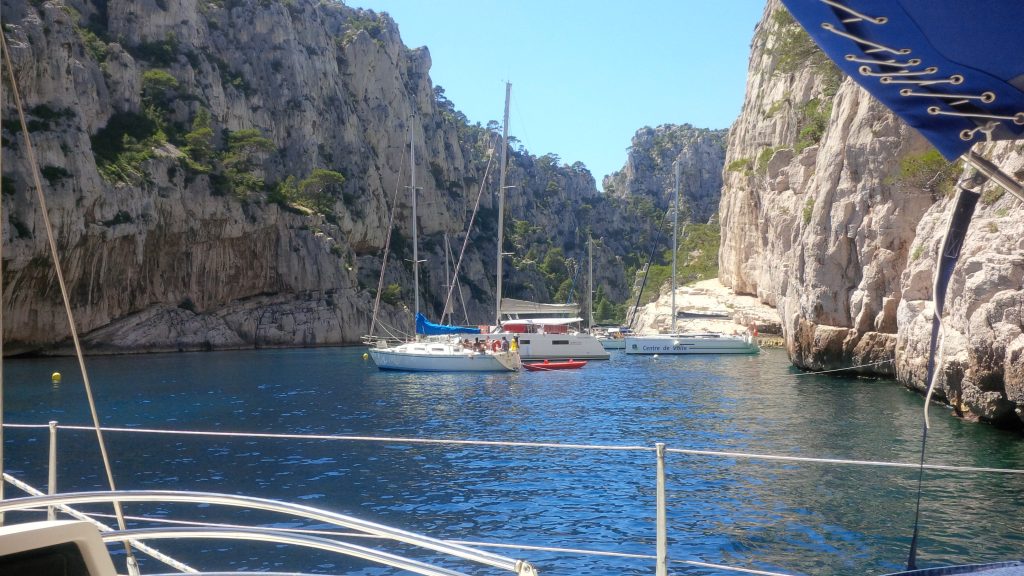 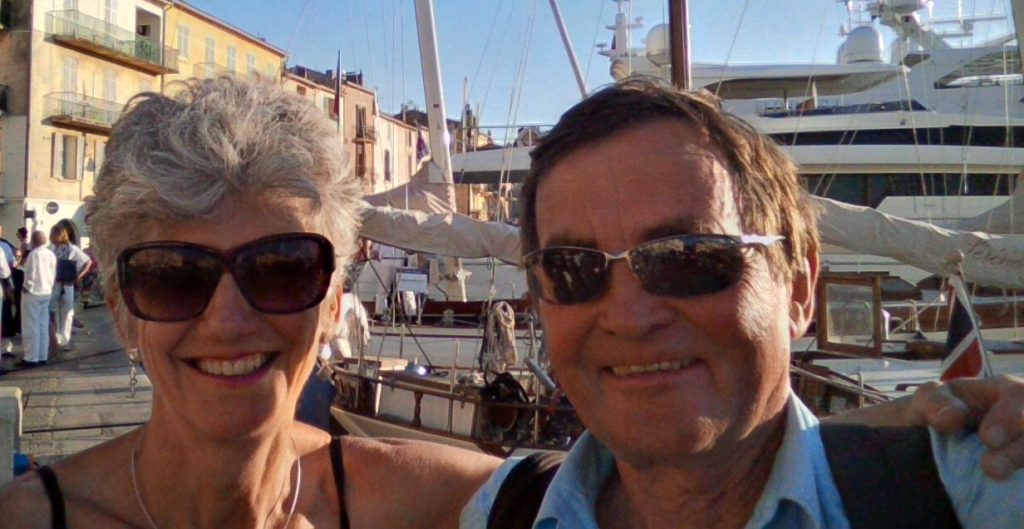 Port St Louis is a clean modern two storey town at the edge of the vast salt-water marshes of the Camargue swamp. Exploring nearby, we saw white horses and pink flamingos. There were rabbit shooting gun clubs, but I did not see bunny on the menu of any bistros. The banks of the Rhone are strangely quiet, free from birds singing…

We waited  a few days there for the mistral to drop in order to step the mast. The installation deal was agreed to be done by the nearby “Naval Services” at a lower rate for the job than the other yards – if it could be done in 30 minutes. We nearly over-ran the time because I lost the pins to the shrouds. One of those black moments of despair. How could I do that? … Yet instead, I quickly grabbed ordinary bolts. These I had to replace the next day, when we eventually found the box where the pins had been “carefully” put away by me at Rouen. It was strange how there could be a hiding place in a boat where we had stowed absolutely everything ourselves. Not knowing how tight to do the shrouds, I erred by setting them a bit slack, and had to tighten things up later after some sailing. Strangely, I could not find a guideline about how tight they should be, even on the Moody web site. Is there a certain “twang”?

Soon after this success, we motored into the Mediterranean at dawn, motoring east into a soft buttermilk haze which caressed our passage.  A symbolic moment for us, to have arrived, free of ropes, with the mast up, for we had completed over 2,000 miles.  We headed through the anchored freighters at the mouth of Marseilles harbour. It always makes me a bit nervous, in case one of them suddenly moves. We keep an eye on their funnels, for those dirty engines belch smoke when they start up. The zone smelled of diesel fumes and of the industrial smoke of Marseilles.

In the next few weeks we learned the art of anchoring in the narrow gorges, calanques, near Cassis, where all the yachts anchor stern on to the rocks. Sarah swam ashore to make fast our very long ex-climbers ropes, always in a vee shape so as to stop us drifting sideways. In the bays of the Porquerolles we would simply swing free. This island group has been preserved from development and the air is sweet. With the pleasures of easy anchoring , indolence set in. 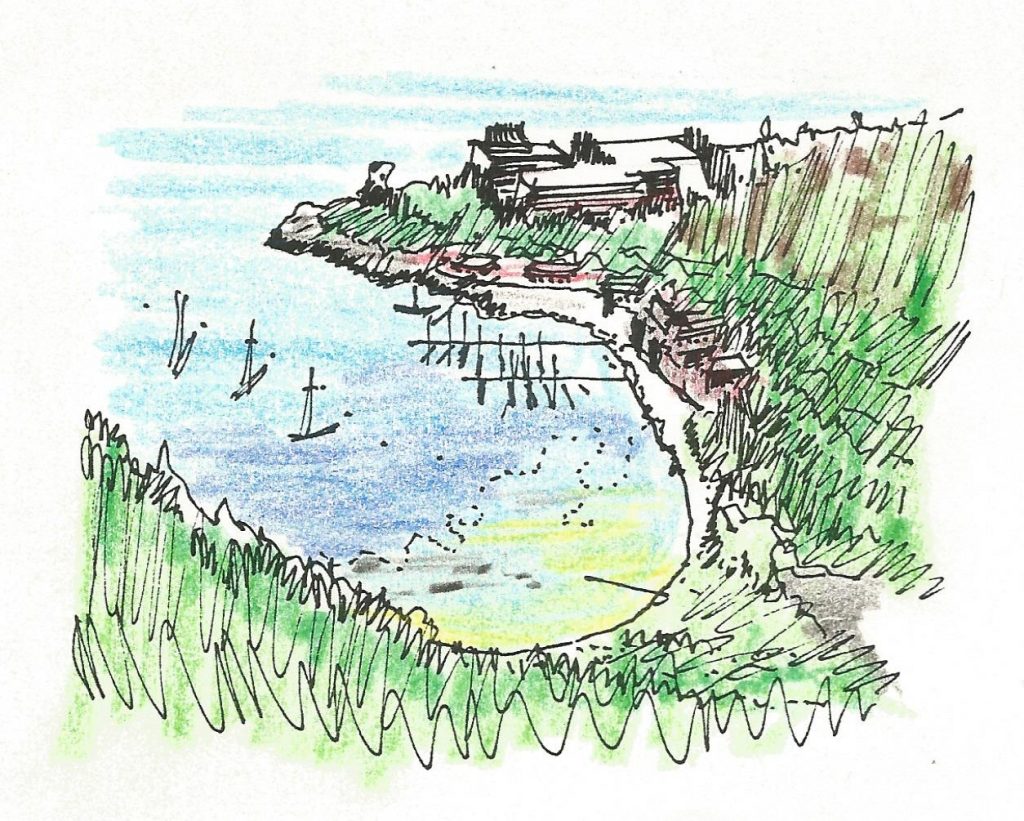 Waking up in the still mornings at the bays, we could smell the pines.  The nearby slopes were also clad in eucalyptus, olives and juniper. Lavender and rosemary thrive here. In the heat of the day there were ultramarine flashes of dragonflies from the shore coming to land in the cabin. Once when she pulled up the anchor Sarah let out a shout of fright – for there was an octopus on our chain. Shake it off – or grab it?  Could that one be the legendary kraken from the deep?   I was just thinking that I don’t know how to prepare it ….but I do know how to kill it. I have seen them caught at night on Syracuse, then bitten in the face by the fisherman. But our supper let go of the chain and g 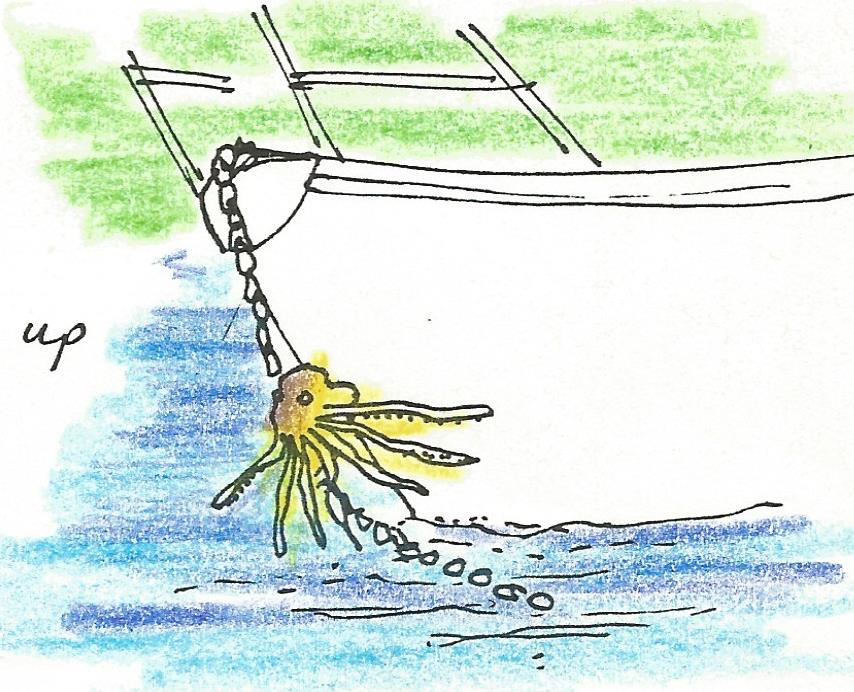 The sun which we missed in the English winter now made a dependable arc every day over the clear cobalt sky. Truly we had arrived on the Cote d’Azur. The clue is in the name.

Entering the gulf of St Tropez we motored into a light headwind from the northeast and then anchored outside the famous old fishing village in the calm sheltered area outside lines of yellow buoys. There were about 70 other boats of all sizes.  Nowadays, of course, this port is known as a hotspot for glamour, and for its high prices. A coffee, for example: – was more than 10 euros.  The powered ribs from the other visitors planed past at high speed, and their wash gave us some unpleasant rolling motion. They often came two by two, as did the little black helicopters. Sacre Bleu, it was enough to make a gin and tonic glass slide over the cockpit table. 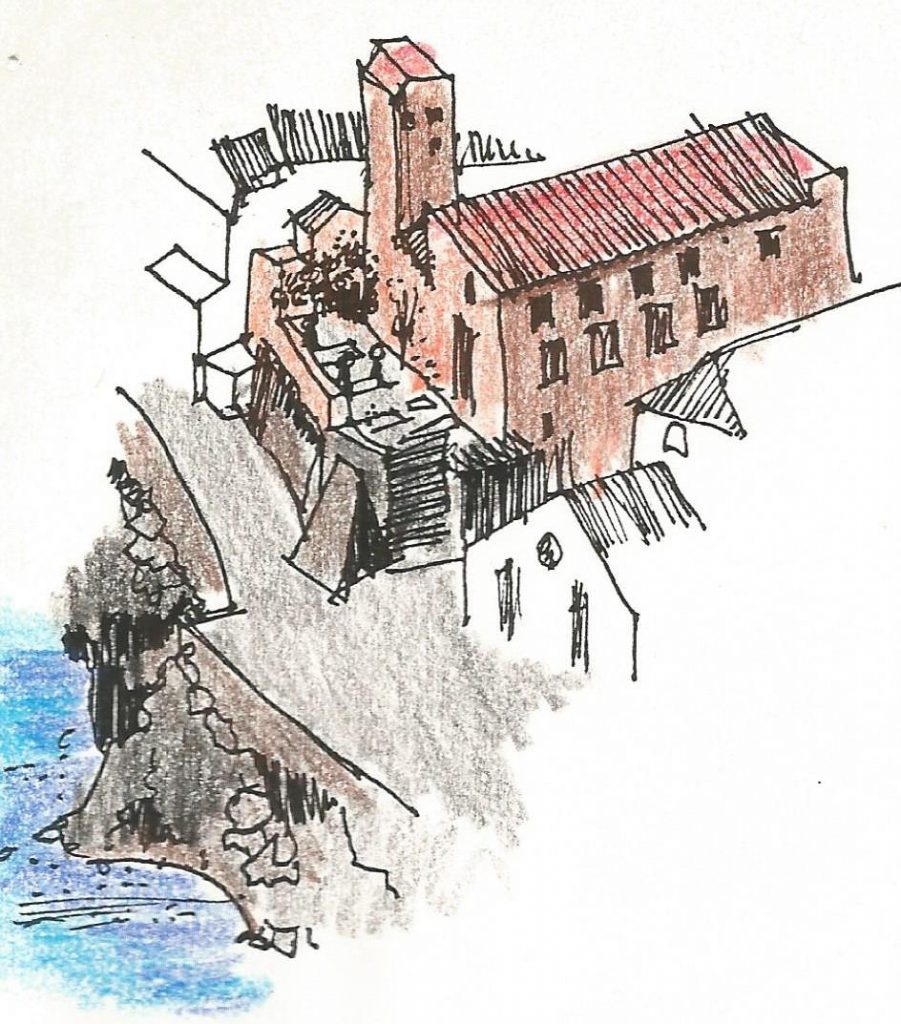 During our two weeks on the Cote D’Azur, we got used to being surrounded by the very big yachts. There is no mooring for tenders in St Tropez harbour, but we hid our dinghy by some steps.  We watched the 50 metre long superyachts going slow astern  as they squeezed into the line at St Tropez quay… Fenders the size of humans would be dropped each side, their colour matching the crew outfits, dove grey or navy blue.  Could I see ironing creases in their shorts? Deck hands with mobiles were working on both stern warps.  At the same time a chromed hydraulic passerelle would be easing out towards the quay. Classier than my old adapted ladder then.  Domestic staff put champagne flutes among the flowers on the stern tables. “No Photo, no photo…,” said one security guard, dressed in black, on the quay. Then he looked up to glare at a drone going overhead while it photographed the guests on the top deck.

Shearwater motor-sailed in the light haze eastwards along the coast at just over 5 knots. We always seemed to be close hauled in a light headwind, which was so annoying.  At Marina Baie des Anges, like at St Tropez, everything was expensively ordered, clean and finished.  The artificial grass of Astroturf on the verges had dog poop patches at intervals, so that it stayed a perfect emerald green.  Here, everything has been built since the 1980’s. The 16 hectare (40 acres) site features no straight lines. It was the vision of architect André Minangoy, and it can probably be seen from the moon. High rise buildings shaped like white concrete waves, with palms on the terraces, curve round the yacht basin, the apartments housing 6000 residents.

Saving on the high prices of food at the marina we made trips on our fold-up bicycles in order to stock up at a Carrefour. At last… abundant peaches, apricots, bananas and apples for our morning pancakes. One of our great pleasures is to take them warm, with our coffee, on our cockpit table in the morning sun. And cheap wine was stowed for everyday drinking later, although the bilges were still well stocked with the Baune, saved from our passage in the Burgundy canal. 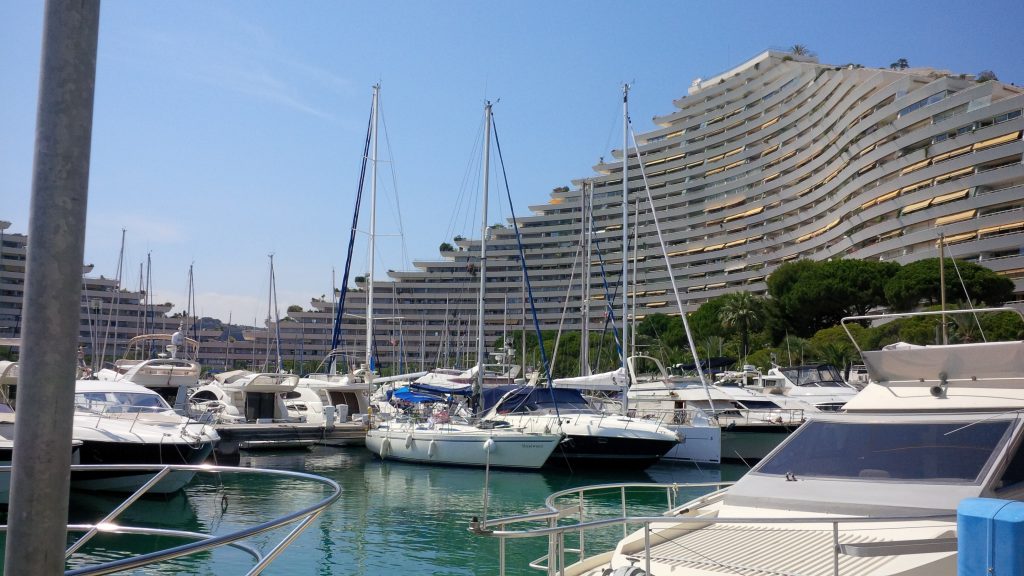 Staying in the marina was at a price of 32 euros a night. It turned out to be equal to the amount at Antibes. Later we discovered this to be half the cost at the Italian marinas.  Less than a day’s slow sail, reaching in the sea breeze of the afternoon, took us back west to Antibes. Being just about the largest marina in the Mediterranean, with 1700 yacht berths, and another thousand small cruiser berths nearby, Port Vauban of Antibes has  a newish circular drum as harbour office, which feels like the size of an airport terminal control. Up we went to the higher floors of shiny new polished stone, hardwoods and glossy wall finishes. A row of administrators behind a big curved counter were ready to take our money, then different harbourmasters to allocate a berth. Then marina staff down on the pontoons appeared in their rib, to guide us. The power sockets turned out to be large ones, but we borrowed the right size from the marina.  This is no longer a place in which to casually sneak anymore, and pinch a berth, as we did over 30 years ago in a borrowed 9m Prospect yacht. We had been loaned it out of Marina Baie des Anges, but we had no papers for it.  Using my skills honed in Liverpool for getting into night clubs without paying, I had kept my head low at the office desk while arguments developed all around me on the subject of who could have the three phase power for their air conditioning. The superyacht Nabila seemed to be winning.  I made up some numbers for the registration book and …. We were in.

We anchored outside Antibes a few days later ready for an early start to Calvi, for that was to be our next passage. It was so exciting to prepare to head for the open sea for a full sailing day, but that was not to be. We awoke to a glassy flat mirror, across which we motored all the way to Corsica. That’s typical of the Cote D’Azur. 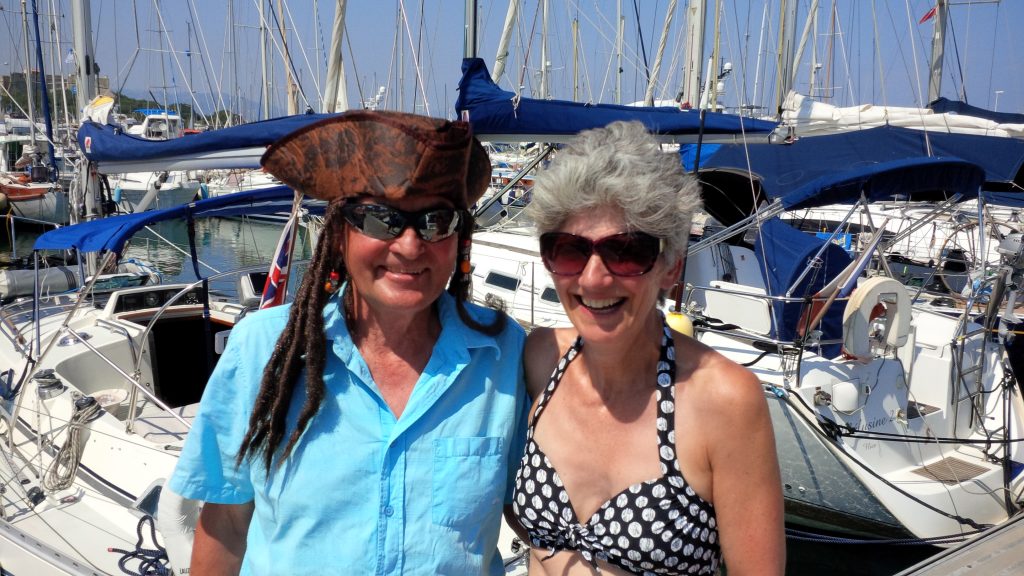