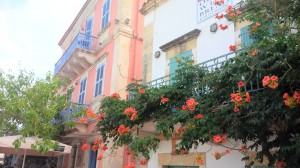 It was only a couple of bays north from our deserted anchorage to motor into the light wind and arrive in this harbour. We anchored stern tied to the north shore of rocks with about 50 other boats. Perhaps 200 more were on other shores or on the quay.

This sea village escaped the worst of the 1953 earthquake and so if you look for them, some buildings over a hundred years old still stand. Those that are patched up have painted ochre and salmon walls and fake stone surrounds. The street pattern of only one block back from the quay is medieval, random widths and angles. So the grain of the settlement has soft disorganised feel. There are only 200 or so resident homes, but they have taken a lot of trouble to keep ancient olives growing in the small spaces. There is more plant colour here than we have seen – hibiscus, bougainvillea and oleanders are everywhere. Exercising its charm on the wealthy superyacht owners, it is also crowded in the outer anchorages with floating palaces over 100 ft long. So walking along what is left of the waterfront between the continuous café canopies is a bit like Salcombe or St Tropez.   Ferries arrive in groups to discharge trippers to add to the boaties, mostly in beachwear as they stroll slowly all day in a continuous passageata. If you like clothes shops, then it is welcome to Chelsea.

As we slowly got through our most expensive coffee we met a coastguard from Piraeus. On holiday, seeing his own groups of islands from a comfortable chair – “its reading time”, he said, as he opened the thick volume called Dune. We discovered that we have both read it several times – in his case both in English and in Greek. Being a science fiction novel it is a very scary story, and we agreed that one message to take from it is “don’t sit in a room with your back to the door” … When I first arrived in Liverpool as a student it was wise to learn this early in the city centre Pubs. On my first visit to the famous Philharmonic pub, a man was breaking a beer glass behind his back on a nearby table as his aggression increased towards those in front of him. Later in my practice I employed a graduate from Belfast in Northern Ireland – and he had the same rule as myself and the coastguard.

“When we approach the migrant boats” he said, “the crew sometimes slash the inflatable rib – so as to force us to pick them all up.” He continued that there is nothing that can be done by intercepting the tragic tide of humanity entering Greece. It is also known that if they see a patrol boat there are some cases where the people flock to one side of their overcrowded boat and capsize it.

We walked through the pine woods on well marked trails to the ruins of 6th century Basilica, walls and window openings half remaining. And then on to the 19th 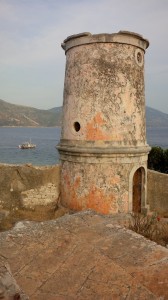 century lighthouse, looking rather  Edwardian. Nearby stands the circular Venetian light tower complete with its spiral stair. The colours of the nearby tiled roof are bright orange and yellow – and these seem to be the theme of the whole town that binds it together as a pretty picture.

Back at our ya 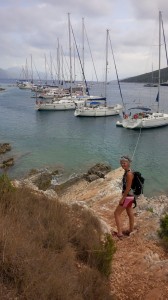 cht, the wind got up from the side and the sky filled with lightning flashes at dusk. Two boats next to us dragged their anchor. Re-anchoring in the dark meant that the lines were not straight out, so next morning both our neighbour and ourselves were hooked to others. Luckily the wind had dropped, so that was solvable by playing hokey-kokey up and down for a while with chains and hooks.

Parrot said “did I tell you about when they tried to bury that man who wrote the song?…..They got his left leg in, then it came out, then  the right leg in…..”

I have put the cover on Parrots cage.