Our children have been using the yacht in August. Jamie took Shearwater to Orei harbour single handed from the beach where it was launched by the Dimsteff team. Then he and Louisa ( with Will as their guest) sailed Shearwater with our blessing for a week out to the more remote Sporades. Anchoring in the clear bays they got up near the Monastery on the otherwise uninhabited island of Kira Panayia. There were blue skies and gentle winds. What could possibly go wrong? They had just anchored in one of the deserted bays with goats and falcons for company.,,, 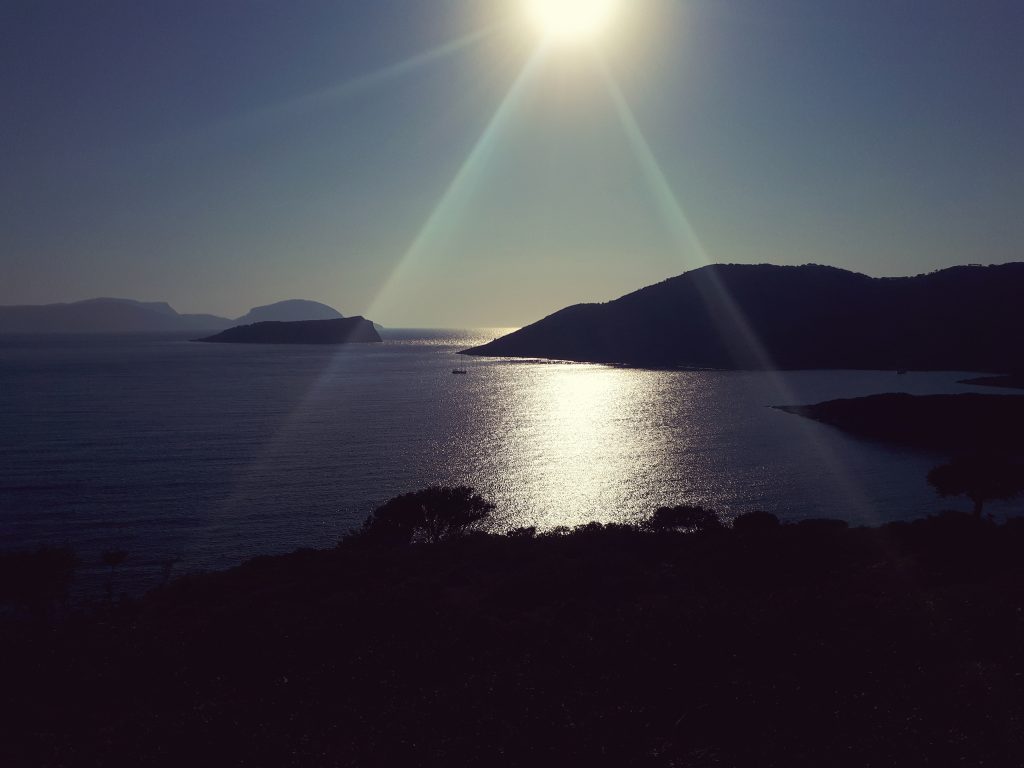 Thick black smoke belched from down below as the engine cut. So like all sailors they checked a lot of things at once – thankfully we had new fire extinguishers of the latest mist type.
But the fire was in the main battery switch, it was not spreading… furthermore, nothing wrong could be found down below, no loose wires, no ignition key left in the wrong position. “I’ll call the coastguard for a tow, “ said Jamie, when he got me straight away by mobile.
Now Jamie has not read as many articles as me. And one of the things you don’t do in Greece is call for a tow. Papers will be confiscated until the boat is surveyed as seaworthy again.
So the young ones sailed her back to Orei for 3 days, anchoring under sail, and berthing on the south side of the harbour. Furling at the right moment , they jumped onto the stone quay. Now where did they learn that? Not from me. We watched them on RYA courses, sometimes sailing rudderless and even backwards. Not a lot of yachties can do that .
A week later, Dimsteff yard diagnosed that it had been the starter motor jamming because it locked onto the flywheel . It became a generator driven by the engine, whacking a huge current all through the boat until the switch melted. (A fuse in the diode controller protected the charging system which I found. As expected, it had saved my more expensive electronics and the alternator ).
So how did they have any power for anything, such as depth sounder each night? ( well they have got a lead line), radio, water taps, navigation chart plotter,and lights? See the picture here. 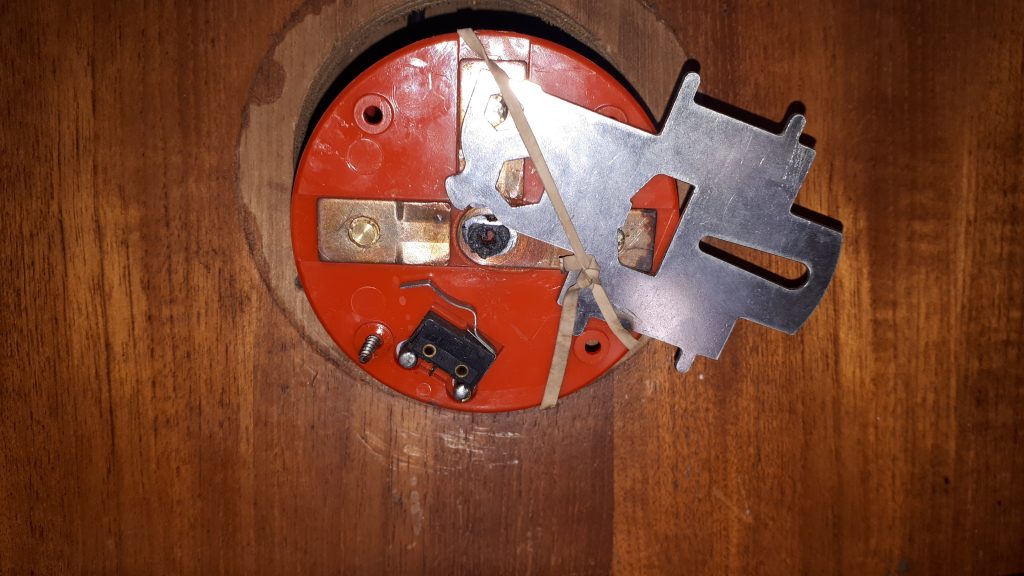 With a lot of strength is it possible to dismantle these switches and tape a piece of metal over the terminals. Thank you to the solar panels and theGreek sun for giving enough trickle charging for all those things.

Our kids called it a grand adventure. It s lucky they did not take a tow. Would their credit cards have stood the 4,000 euros that a tug extracted from a similar Moody 34, Vaila ? We met Petra and Andy Eaglesfield later in Skiathos, as they moored her and we took their ropes. A friendly, relaxed couple, they did not enjoy the experience of being towed off a sandbank near Corfu after being blown onto it by 60 knot gusts. “ So this is what it must feel like to be shipwrecked,” said Andy. (www.eagiesallatsea.com ) But then there is the Greek paperwork – for any yacht towed into a harbour has its papers confiscated. Movement out is not allowed again until there is a survey…
Parrot says that’s a bit steep. But on the other hand, Greece is a maritime nation, and has a layer of administrators above the level of harbourmasters… The Port Police. Stories circulate about what will happen to a yacht without a DEKPA document. Parrot says they nail one hand of the Capitano to the mast. Then again, when Jamie sailed Shearwater into Corfu, the port police did not have the papers and for 20 euros they gave him a form which we think says…”we have no papers .”
Our previous effort trying to get port of exit paperwork when we left Palermo was foiled when the Guardia Costiera sent us out of their building empty handed. It was hard enough to even get into their fortress, leaving our passports at the guardhouse. “You need not bother here….” They never said that to the yacht that was fined $2,000 in Genoa for not having paperwork in order. It might have been because it was American, or just because on board was Michael Douglas. We have not forgotten the charming gallic shrug of the French harbourmaster in Treguier when he greeted us after a channel crossing. “ But zis ees Europe, “ he smiled. When this is mentioned, it’s the cue for Parrot screeching , “ Wait for Brexit, wait for Brexit, wait for Brexit.” I have to put the cover on his cage.
The Greeks being obsessed with papers, Sarah has decided to get the international certificate of competence. Three full weekends in Bristol were spent, plus homework, at the Bristol Underfall Yard dockside. And with the shore based exam passed ( top of the class ), followed by the radio certificate, she is off to Gibraltar to do a week of practical . Now Sarah has been handling our yacht for all this summer trips, into all harbours, forwards astern, sideways. It seems a bit odd to have to pay someone to tell her she is good at it, as well as me saying that she is. Then again, it’s tempting for her to go on a warm week in October away from England as chillier weather sets in.