To the west, as we approached Catania, the silhouette of the active volcano Etna was shrouded in clouds at first, and then became clearer in the sun. After an afternoon’s motor sailing to the south in light easterly breezes we entered the busy harbour of Catania where ferries compete with everyone for the entrance zone. 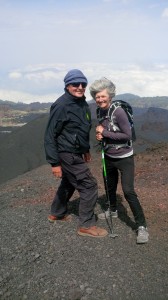 omised us a different experience of Etna.  Sarah found him on the internet, and made the booking. His mission is to take people  “on an eco-friendly project as an alternative to the tourist excursions by jeep, ….. suited for people who feel a well balanced approach to nature can be a vehicle of personal growth and a way of harmony.” 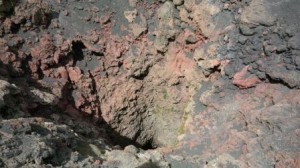 walking on the trails round the lava fields. Near the top but amongst the rings of smaller extinct craters.  Some of these are less than 20 years old.  We got up into sunny ridges above the tree line, while Carmello talked about the “symphony of volcanoes.” As a child, he watched the village of Fonazzo slowly being engulfed while people visiting the lava flow were being sold pizza and wine.

When we got to the topmost ridge of one of the caldera valleys, the wind was over 50mph. If not walking we had to kneel. Down below were different types of volcanic bombs, caldera valleys and lava caves. We saw the moonscapes of flat dusty areas. “Did they fake the moon landings there? “ said Parrot.

On the way back I as 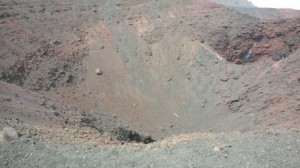 ked the Dutch people if they knew why all of them were taller than us. “A healthy life?” said Jan. Not actually right – this has been the subject of studies last year in Holland which have been issued to architects for guidance on the fact that it is time to generally specify taller doors. 75mm ( 3 inches) in fact . I thought it was because they eat lots of cheese and drink lots of milk, but not actually right either. The answer is “natural selection”. Tall people like to marry tall people. Parrot says “is that why Welsh people are shorter than us?”

Carmello got started talking about Renzi, the premier of Italy since these last few years. “He is worse than Berlusconi, “ he said.  Renzi started out a socialist and now is the premier for big business interests in the north. “ He continued for an illuminating twenty minutes, concluding“ As for the local government – they are all lining the pockets of themselves and of their friends. Why should the governor of Sicilia get 300,000 euros a year? That’s more than Obama!”