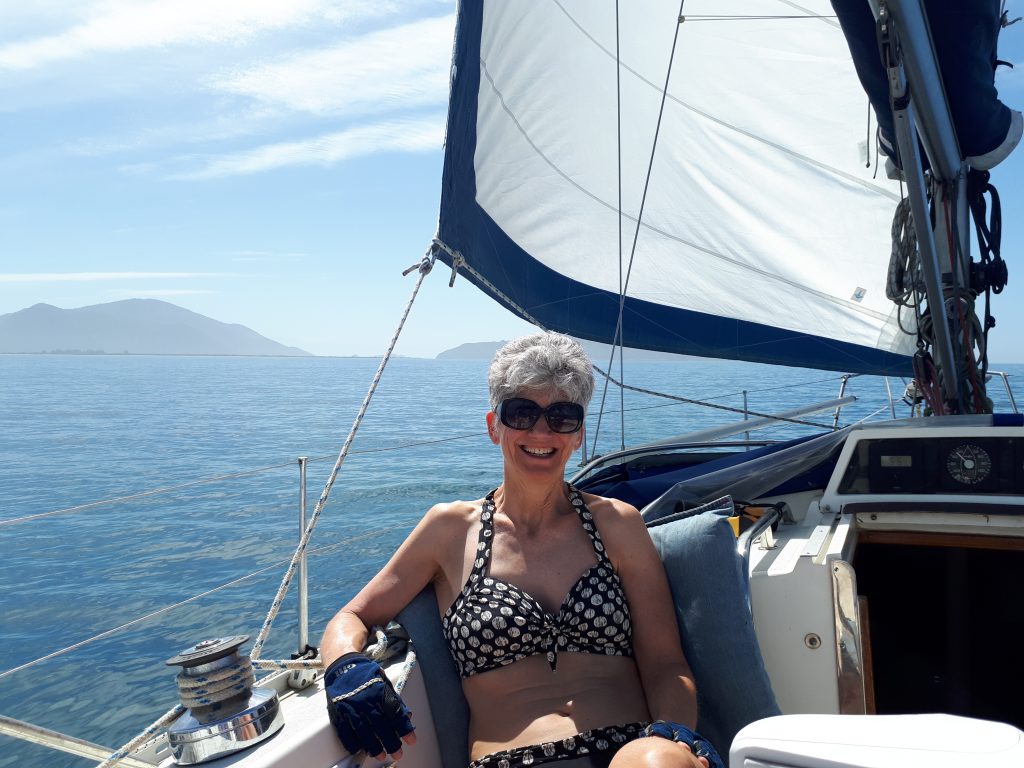 Our sailing cruise took us eastwards towards the Corinth canal under the huge suspension bridge of Rion. On the mainland we again tied up in Mitika, a small town with a very small, shallow harbour, some 2m (6ft) deep. There was just enough room for 3 yachts, surrounded by many fishing boats. One water tap was in use and the two yachts we spoke to had been there for a long time, this concrete quay being free.

The air of dereliction continued along the stone paved main street where occasional café seating spread out. There being no pavement, we sat outside the post office along with a few locals waiting for it to open. The beer was the cheapest here, at 1euro 50. It included a plate of spicy pork. Perhaps the town has been a holiday destination for Greeks, and some of the surviving bars were modern with steam punk lighting, occupied by young men arriving on motor scooters. Between buildings the sea could be seen down the narrow slots framed by intense crimson bougainvilleas. The little grocer near the harbour said, “ We expect the worst times now for 25 years.”  The town no longer has “convenience” shopping, and the nearest thing to an ironmonger was a trestle of tools in front of a van by an empty lot. Plans to revitalise similar streets in the poorer parts of Bristol have been the subject of reports by gurus brought in to give advice. You cannot do much when each unit is owned by a different family. Close them? Make the shops residential ?  Do yet another re-paving scheme …Which is not something that bothered classical Corinth in Roman times – as we could see later from how their shopping Agora transformed over the years.

Motoring eastwards in a flat sunny sea we anchored for a night at Marathia – a deserted inlet with a camping beach at the head. However the wind increased to a near gale from the south that night blowing into the cove, and Sarah was awake on anchor watch. The bottom being good soft mud, and our chain laid out long in 4m (12ft) of depth we never moved.

Light head winds were slowing us a little during a morning’s motoring to Astakos. Anchoring in the bay we rowed ashore, though there were a few yachts tied stern-to at the large fishing quay. Large coffee bars lined the front, some full of students. Our visit allowed a full stocking up of supplies. At the   greengrocer which was more like a deli we bought a large jar of pine forest honey. The owner explained: “ the young people are not students, they work in the fish oil industry.” Parrot said, they must have been having a very long lunch break ? At the fish shop, we asked for lobster, for this is the name of the town, “Astakos”. Being met with a puzzled glare we settled for a plate sized fish that looked like sea bream – and appeared to be the product of one of the many fish farms along this coast.

Trying to head south, we gave up against mounting wind and seas – turning Shearwater northwards and running before the waves. By the time we could see Kastos we were sometimes looking upwards at the breaking white rollers. Whenle anchored in the calm shallows we continued some small maintenance tasks for the yacht. The masthead wind vane feeding the dials had blown away and emails with phone calls to Stowe revealed that, yes, they could send out a new one. Stowe website shows superyachts and the prices of parts are in that bracket of “ excellence and nothing but the best…”  So, being sailors on the lower end of yachting budgets, I found a used one on ebay and took a chance on it working well enough for us. It will be sent home and it will come out with us on the next trip. Parrot says we should get used to feeling the wind on our gizzard and never mind these electronic dials. 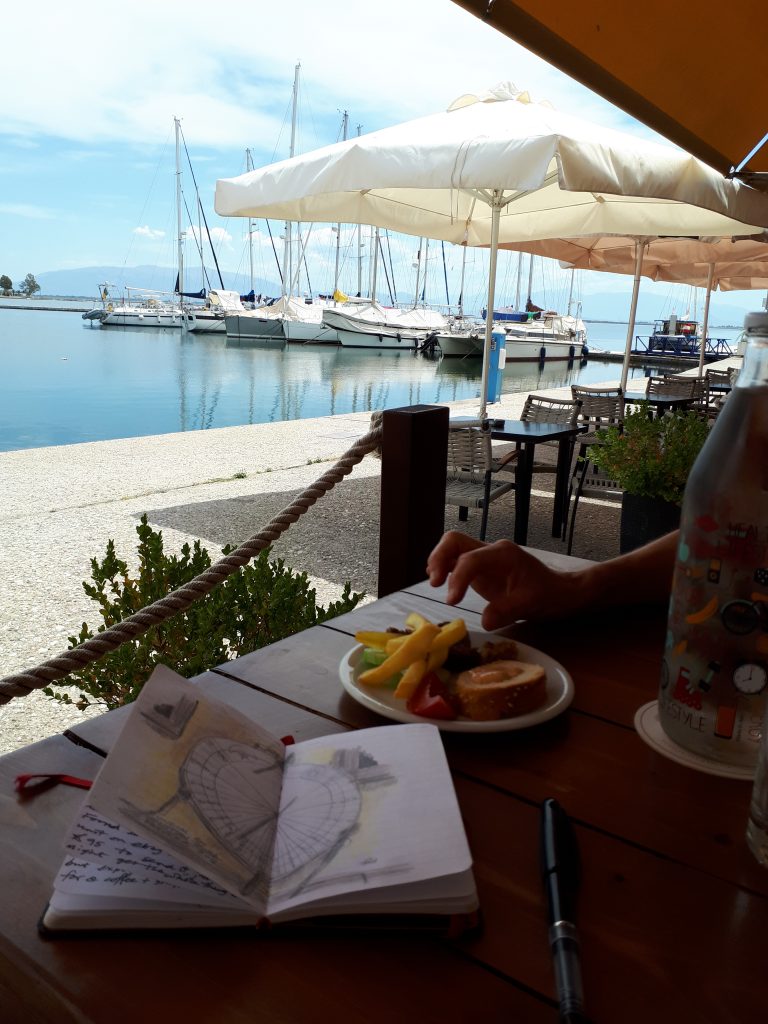 Messalonghi had an entrance of buoys out in the shallows that would be hard to find without satellite navigation in the chartplotter.  We motored and sailed half the day to get there with gentle breezes and a slight sea on the beam coming  from the prevailing westerlies We watched a lot of plump brown Manx Shearwaters skimming the waves. A turtle paddled by, about .7 m across ( two foot six).

The marina was “closed”, we learned later after tying up stern-to with the help of Panos in his red tee shirt. Somehow, although nobody appeared to be on duty in this full marina with about a hundred yachts, he appeared out of nowhere and chose a gap for us. It was his lucky day.  We made Panos the happiest man in the Greek coast by giving him our 3.5hp  Tohatsu outboard. The gear had seized, and we had  been advised not to spend more money on it. ( though I had cleaned the carburettor with spray and it started fine. )

Along  the pontoon came Bjorn from his Halberg Rassy 42 yacht. “ it was a good thing you did not radio, “ he said. In fact the radio channel was not on the pilot but was on a sign near the entrance. “if you had done so the police would have chased you out.” Across the bay is the town quay with room for half a dozen yachts, but we wanted the laundry and water- having been wild anchoring for a few days.  “ There is a problem with the finance of the business  here, and they are not allowed to take in any money or yachts. “ Bjorn lives in the extreme cold north of Norway and has spent winters in this port for many years. The French boat near us had a crew arrived the same day as us – and after putting their sails on decided not to go out sailing because they would be refused entry. They spent the next few days getting very jovial on their beers from mid morning onwards. Sure enough, all this was true. We heard the screech of police car tyres as they shot round near us to chase away new yachts over the next few days. The marina reception was  in a smart new building, with polished marble floors and a huge room big enough for 8 staff. The two on duty told us the same story, that we should not pay for now in case we were chased out. “ hide in the cabin,” was the advice. The young English speaking women looked like fashion magazine staff, smart and smiling. They did not take our money till we left, “just in case…” The wifi was off, the power was intermittent, but the laundry had three fine excellent machines.

So it was our lucky day to arrive during a Sunday football match. We realised this, as we walked into Messalonghi past the roars of the crowd at the stadium. Seven police cars were parked outside their office. The residential areas near the port had seen better days but at the heart of the old town were some pedestrianised streets with honed stone pavings in textures of honey and grey and colours of ivory and terra cotta. Bars on the frontages were full of young people , as this town has over 3,000 students. The interiors were extremely modern with sharp led lighting, and plate steel doors.  ( steam punk has arrived here). Walls of random books seemed to be the fashion. Parrot said it was so the students could pretend they were in the library. Many shops were closed, the tendency being that only bars were doing well. All these young people were drinking café freddo, not alcohol. 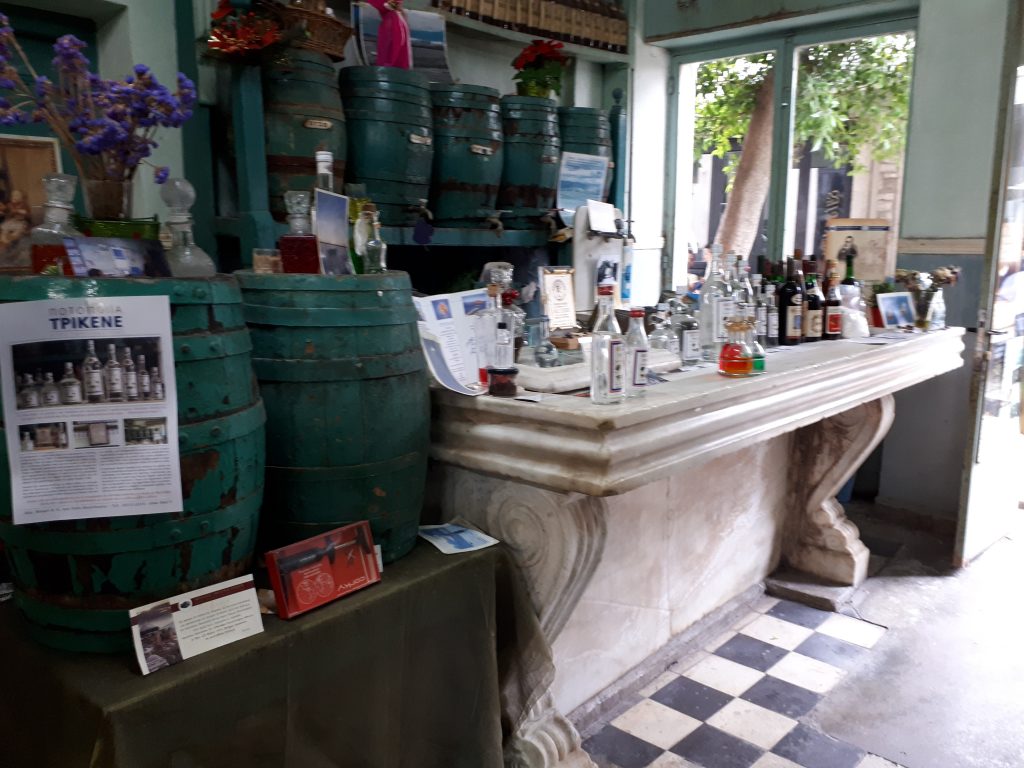 Opposite our favourite bar was a shop front that was over a hundred years old. The owner showed us round – for it was an ouzo outlet. The barrels lined the inner room, and near the door was a white marble counter with small ridges in it – for placing ouzo glasses upside down to drain. “people find me by the smell of the anise when I open the door,” he said. Ouzo  starts as 96 percent alcohol by volume (ABV) rectified spirit. Crikey.  Anise is added, sometimes with other flavourings such as star anise, fennel, mastic, cardamom, coriander, cloves, and cinnamon.  We have not drunk any.

In the centre the shops are pretty busy and modern, being in generally two storey blocks. I tried to find a tourist office but found that here the idea of such a place with general information does not exist. There are only travel agents, selling trips to the marshlands for wildlife observation, and to some temple sites further inland.

Our new crew of two arrived on the bus from Athens. While we waited, our bikes were nearly stolen, as we were surrounded by a group of teenagers.  They began to touch us while others got close behind . But that is an old trick and we are seasoned to it.

We sailed after a few days with good impressions of this town which seems to have fishing and students as a livelihood. The Greek holiday summer homes seeming to be in decline, it survives with character to live on in a new form. Although it has lost the holiday income it is no seedier than the same size seaside towns in England and Wales.