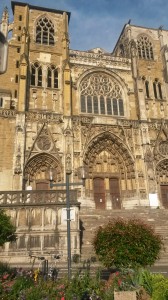 On 30th May 1431 Joan of Arc was subjected to the awful death of being burnt at the stake in Rouen. A large modern chapel is dedicated to her at one end of the street leading from the west front of the Cathedral. The Maid of Orleans, as she was known, had turned the tide of the hundred year’s war 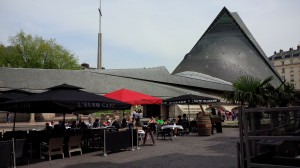 . Prior to her appearance, the English had almost achieved their goal of dominating France under one Kingship – but the 19 year old had the huge effect of boosting morale. At the siege of Orleans she carried the banner and led the French to overcome the English army.
The west front of the cathedral is packed with crowds sculptures. How patient Monet must have been to picture it so often through the 1890’s. One of his many versions has sold for over £40million dollars. The nearest array of cascading sculptures that we have in England similar to Rouen, is at Wells cathedral. The front looks over a lovely square which we often visit. There, down in rural Devon, a long way from London, it was built by the English, not the French medieval masons favoured by the Royal Court. The proportions are calmer and more horizontal. Calm is not the word I would use for the dark Joan of Arc church of 1979, shaped like a crash between a stealth bomber and an upturned frigate. Something that is unlikely to inspire painters. Round at the back there is a stiff whiff of the French open air pissoir coming from the gutter, just a few metres away from the actual site of the burning pyre.
We sat for a beer in the corner bar facing the church in the market square. Next to us a couple were engaged in intimate chats as they leaned inwards, smiling across the small table. In his cream jacket and in her turquoise flowered dress their legs entwined beneath the cast iron filigree, they looked too smart for being on holiday, and too casual for being out of the office. They must have been engaged in the ritual of “Cinq a Sept”….This a French term for a visit to one’s mistress…the name for stuff they do discreetly with someone other than the spouse between five and seven o’clock, so no one notices… Until they are caught on film. For example, as were the Actress Julie Gayet and French President Francois Hollande, who have been carrying on their relationship behind closed doors, while his presidential motor scooter was photographed outside her flat. Not much doubt about our table companions, then, as they walked away canoodling and cuddling in a way that is unusual in mid-life. A google result for “cinq a sept” includes a fashion house selling all day lingerie clothing – whatever that means. Parrot says that the saucy French understand these things.
Waiting a couple of days for the crane to be free for unstopping our mast gave the time to put up the cross braced supports. They were made in Bristol by a joiner we call “fag ash Pete”. ( yes because he was always smoking.) I scanned the dockside for planks to see if I needed to have bothered with bringing my own timber. The next door yacht, “Freedom at Last” successfully found enough very rough old planks, but then again in order to make them up they had more people on board working than just myself. Sarah became very ill with food poisoning and at the appointed hour was only just able to stand, hugging the bottom of the mast as I swung it sideways under the crane. There were 27 split pins to remove and about a full day of preparation, but the job only took 55 minutes. The crane driver had gone on extended holiday, and the job began without any helpers. Not a lot of health and safety on our project.
The furling foil was tied loose to the mast as it came down. Being an aluminium channel, longer than the mast, it hung down, bending until I tied it. With the benefit of hindsight , I would have put the furling drum end astern, not hanging there over the bows. We did not know that in the swirling streams of the big locks we would sometimes touch the forward end on the lock walls. Luckily in spite of being bashed in that way the drum was not after all damaged. 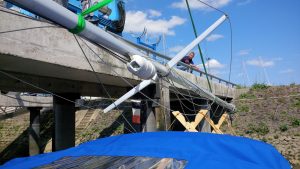 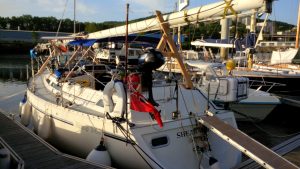 Lost in translation by advice from another yacht was that the radio aerial should be re-connected to the kit below with a temporary wire. Off we went, cycling to the chandlers in the central river island to get a female connector – but it was not needed. The AIS still worked until we got further inland. It had been useful on the larger stretches to see a bigger boat coming round the corner before it bore down on us, always in mid stream.
Other bike journeys finally secured Calor gas and we had the correct adaptor given to us by the Dartmouth Gas safe engineer who had certified our boat just before departure. 35 euros was a bit steep for a 2.7k bottle, but at last we could stow our 4.5k butane cylinder for emergencies.
In very heavy rain we finally stocked up with supplies on Ascension day. Everywhere except the Carrefour was shut. We tried to empty our holding tank, only discovering here that we had not been supplied with the correct adapter in England. Even the gas oil pump at the marina was not working, the man was expected to mend it at the end of the week. So nearly happy with a boat that was finally full of fuel and gas, at 9.50 we departed for the first lock of the Seine. Not enough information about where we would next tie up really, and nowhere to tie up if we got too late…..