We had anchored outside Antibes, ready for an early start to Calvi, slipping away at 5am. The day of motoring to Corsica was on a sea like a flat mirror. Strangely, there was nearly half a knot of current with us for most of the time. A lot of motor cruisers set their auto pilots to follow the same course as ourselves, 131T, so a lookout was needed to see them both in front and behind. Suddenly we saw a lot of orcas – great excitement for us, and such slow, calm movement from them.

We awarded a piece of eight to the crew visiting us who spotted land first. Soft clouds appeared to be the backdrop of the port. As we got closer we could see that they were not clouds, but billows of soft lavender to lilac coloured mountains rising in hazy layers.

Calvi is a busy tourist trap of a harbour where, arriving just before sunsest, we tied with the assistance of lots of quayside red-shirts. They put us up stern-to at a quay with a boom boom bar. Perhaps misjudging our ages? Oh well, just this once we did not mind the noise, for our journey next was to take in the deserted west coast bays. We liked Calvi with its rows of holiday shops, and coffee bars. We tried to buy clothing but they would only take cash…. Further along, we bought wild boar saucisson before leaving.

Corsica has a history of civil war with many shootings. We awarded extra beers to the crew for each bullet hole spotted in the older walls.   Nelson overcame the defences here when he pounded the site with 2,000 shots from the guns that he had pulled up onto a nearby cliff. Corsica was then  British for two years.

Down the coast we anchored at Marine d’Elbo for midday food and swimming. It is one of the spectacular bays, formed as a craggy slit up into the salmon tinted mountains rising 600m behind.. We swam over curved valleys that were deep enough to induce vertigo. The red rocks in their different formations carried down into the clear sea, where we snorkelled to see the same bulbous rounded shapes as were surrounding us. The park patrol chased Sarah back down to us, after walking up the canyon path. This is a nature reserve where there are over 100 species of birds. Well, that is exactly why Sarah was wishing to walk there…

Later we motored round the rust coloured cliffs jutting out to sea and entered the gulf at Cap Rossu. Some say this is one of the most beautiful bays in the Mediterranean.  High jagged mountains stab at the sky in layer upon layer of ridges. They fade into shades of silvery smoky layers in the distance. The drama of the foreground is the equal of the Cuillins on Skye. But as parrot points out, we are not in anoracks, hats and scarves, braced against the Scottish rain. We are in shorts!

A slow reach took us to the cove at Anse de Ficajola. Not wanting to be bounced about by swell reflecting off the cliff there we stayed offshore in 16m depth, with all 60m of chain out.  It is shallower inshore where a day stay would have been fine, and a rope to the rocks might work. One yacht was there for a while, trying it. Once again, next morning, the swell was a bit annoying, being at right angles to the gentle breeze. We set off walking early from the small beach which had a few huts on it for swimming and which marks the beginning of a long gorge.

To get to the village of Piana was a three hour climb for fit sailors rising over 2,000 ft.  up a canyon of salmon and graphite coloured rocks. The old mule track followed the splashing stream, where a red fox gave me a quick look after taking a drink under the fig and pine trees. Surrounded by ochre mountains, we passed under the scented eucalyptus trees to a pretty stone square for lunch.  A sparrow hawk was flying overhead. “He comes here every morning,” they told us.

The sea at this anchorage became a bit rolling yet with no wind, so we motor-sailed to Cargese, arriving at   sunset. A few yachts were anchored outside the small harbour and we found a spot in less than 5m depth with good holding. The town seems to make a living only from tourism, and there was a good bakery.

The next day we again motored to Ajaccio in order to let two crew leave on a ferry. There was just room for us in the marina, at 42 euros. This city is the capital of Corsica, and is surrounded by pale pink slabs of modern apartments.  In the old quarter the lanes are hemmed in by 18th century tenement up to 8 storeys high. Washing hangs out at high level and tourist eateries line the fronts with chairs in the pavements

We stocked up at the open market which had abundant choices of food. Vegatables, saucisson, spices,wine and mountains of cheeses. Best of all, were tables with more different types of olives than I have ever seen. Under the palms with the cooler airs blowing up from the harbour, everything was a delight.

After a stay in Propriano we managed to sail downwind,   but the breeze dropped and on went the iron donkey, although the rollers remained big. Round the corner we surged into the calm of Fornello. The white crests had been building but not breaking, and then we anchored in the calm of this south facing bay. It was surrounded by low lying rocks topped with maquis, and at the head were reedy lagoons feeding it with streams from the peach tinted mountains of Punta d’Ovace, some 3000 ft high. The sun set behind another Genoese tower at the entrance, telling us that with the advantage of a shallow beach it had been a pirate haven until the tower was built.

Down this coast we had seen twenty such towers. Their name comes from the city of Genoa, w 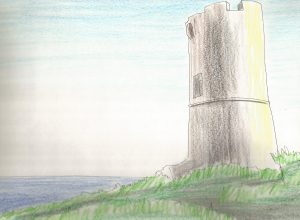 hich was the biggest trading port in the region for some centuries. The towers were built in the 16th century to deter Barbary pirates from hiding along the trade routes. They functioned also as a two man coastguard post.

The next day the wind increased to just below gale force along the coast but large waves did not roll round into our anchorage. We were well dug into a depth of 5m with 25m of chain out.

After a time enjoying the solitude, and when the wind dropped, we sailed out with just the genny into a confused sea. It made us corkscrew so that we were sliding about, and it is our least favourite point sailing. It makes Sarah sleepy. ( You mean sea sick, said Parrot ). The passage was 14 miles to our last Corsican landfall:   Bonifacio, “the city of no surrender.”

We entered the port under the cliffs upon which the town perches. The stone is so undercut by the wind it looks as though they might be unsafe. There are 250 berths and the bending entrance is quite narrow. We chose the narrow calanque where lines were laid out, just as the wind increased to near gale force blowing into it.

You could not make it up, the ending of the “great siege” of 1420. The civilians of this high citadel held out for four months against the forces of  the King of Aragon. Though starving, and reduced to chewing bark, the women dressed in the armour of the dead and noisily manned the ramparts until the enemy gave up and sailed away.

The old town surrounded by the cliffs is in the style of 18th century Italianate, with narrow alleys of stone tenements with arches and washing overhead. Once there was an aqueduct water harvesting system. The streets are almost completely devoted to tourism. Small cars and motorbikes were everywhere.  Out of one café door a young man was playing a love song to a girl.

We walked along narrow tracks inland through the fragrant Maquis to catch the sunset from the next headland.  On the way it was just possible to see the heaps of stone, being the  remains of village groups just a few steps into the dense undergrowth.

Finishing our time at Bonefacio we did enjoy the waterfront bars. They face a quay where the cliff of the town rises above.

We liked staying a while but then the lure of the wilder islands made us move on.  Choosing our moment to weave through the bustle of boats, we motored out of the shaft of rocks at the entrance to turn east. Yet again, a head wind and it was to be a motoring day, which took us out of France and into Italian waters. Now the year of preparations in England to make Shearwater so well equipped began to show the benefits.  We had added 200 amps of solar power on flexible deck units. These were enough to run the fridge, and thus allowed longer between port visits. Secondly we had a tall drinking water tank made to fit into a wardrobe. The 70 litres kept us going for a week. Finally, we more than doubled the boats general water storage with a shaped flexible double skinned tank under a forepeak bunk. The deserted Maddelena islands beckoned. 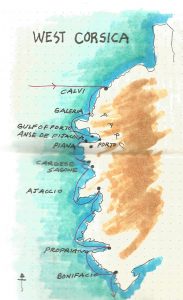 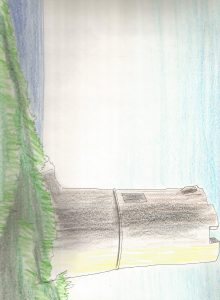 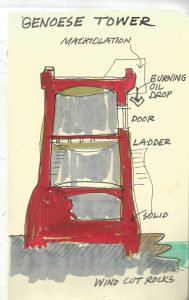 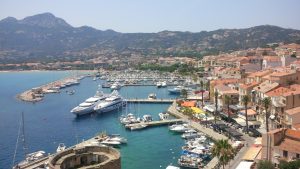 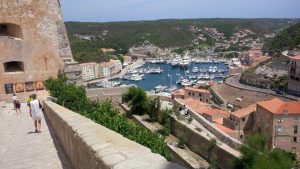